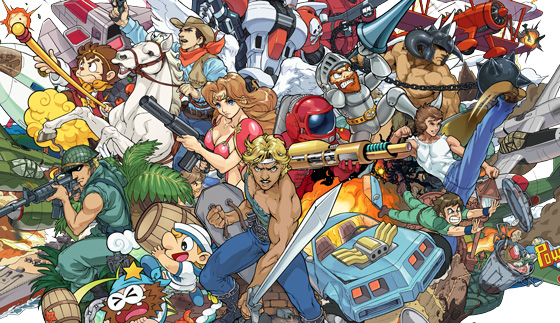 Capcom are going retro with its virtual arcade cabinet for Xbox and PS3. Take a look at the trailer then feast your eyes on the features and details. Plus there’s two free games up for grabs!

Full HD Optimization
-A truly authentic arcade presentation built with modern displays and devices in mind. Added options leave you free to fiddle with aspect ratio, but old school gamers can enjoy a crystal clear presentation of the favorite games exactly how they remember them

Dip Switchery
-Players now have access to virtual dip switch functionality across all CAC titles, so as to allow anyone to customize their life count, difficulty level, and other settings and functions to their heart’s content.

Online and Co-op multiplayer
-Head-to-head play over Xbox Live and PSN has been dutifully added to all games with a two player functionality in the Capcom Arcade Cabinet.

Casual Mode
-All CAC games have been carefully preserved with authenticity in mind. However, the all-new “Casual Mode” cracks the games open in order to allow less experienced players to wade into the more difficult challenges with fun and sometimes unexpected tweaks.

Online Leaderboards
-Because beating the game is just the beginning and high scores are just as important and brag worthy as they were in the arcade heyday.

Achievements and Trophies
-See above

Music Player
Jam out to your favorite 8-bit arcade tunes in playlists tailored specifically to you.

BONUS GAMES x2
-Fans who purchase all 15 games in the Capcom Arcade Cabinet will unlock exclusive access to two FREE bonus games. Feel free to try and guess what they are.