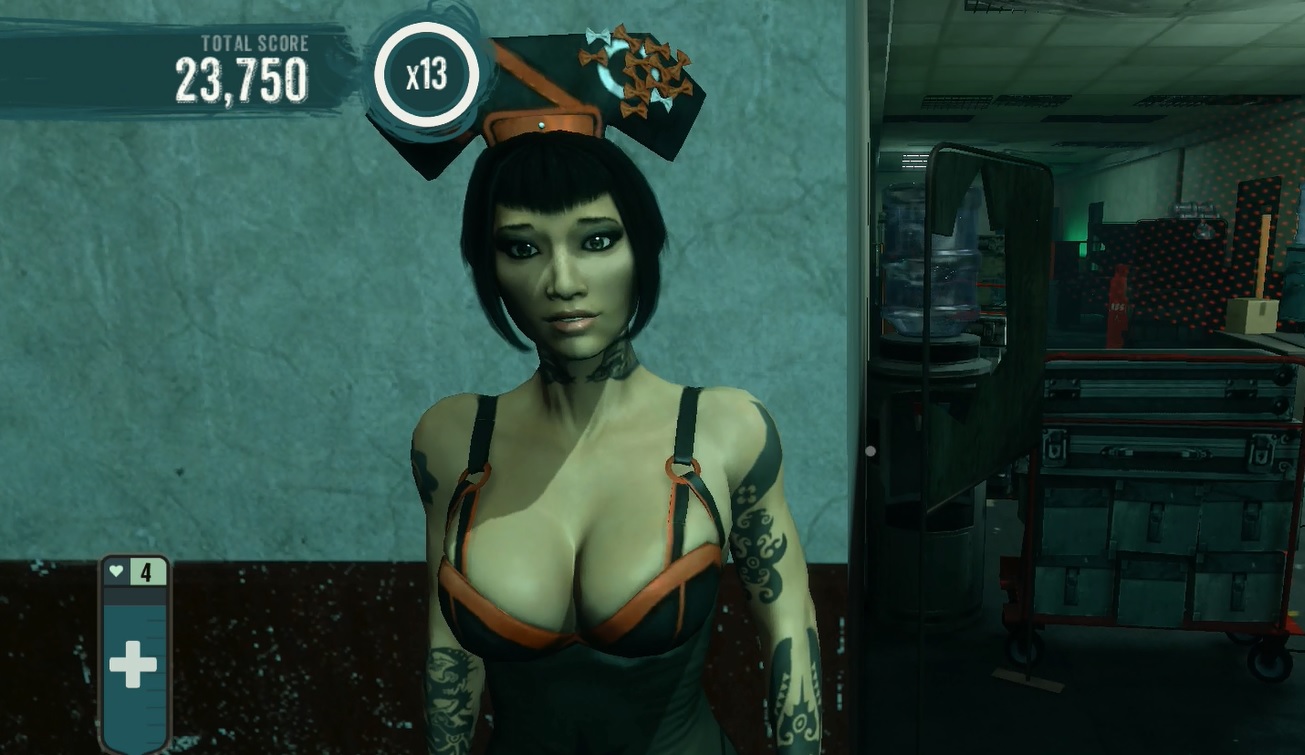 Hesaw’s on rails shooter Blue Estate is available now via the PSN and will be heading also to the Xbox One. With 8 levels of shooting madness and the use of the dual shock 4’s gyroscopic sensors, is this worth sinking the £16 asking price? Take a look at our Blue Estate video review for the full low-down.

Today we’re taking a look at the not so serious on rails shooter, Blue Estate from the warped mind of comic artist Viktor Kalvachev and developers Hesaw. The game thrusts players into the role of two unsavoury characters across eight themed levels which provide plenty of thrills per minute shooting action. First up is Tony Luciano, a homicidal maniac son of LA’s crime boss Don Luciano who shoots first and doesn’t ask questions. Aside from his long hair covering his face during shoot-outs, the character acts as a perfect excuse to test out one’s shooting prowess against a variety of up to no good adversaries. The second character is ex- navy SEAL and smooth operator Clarence, who has been drafted in to clean up Tony’s mess. Whilst the two never cross paths, both offer their own take on silencing the wide variety of goons who litter each level and come at you from all directions.  The story is as inconsequential as it is mad, and can be easily ignored if one is simply playing for points. For the impatient, there’s an option to skip the often long (for an on rails shooter) scenes and just fire away.

Playing the game, takes a bit of getting used to because the unique aspect of moving the cross-hair is handled somewhat differently to the expected thumb-sticks. Players can move the cross-hair by simply tilting the PS4 dual shock 4 controller as its gyroscope sensors relay the info to the screen. Whilst it works for the most part, there is a constant need to reset the position by tapping a button during play.  It’s not intrusive as it’s an instant switch, but is an additional element to focus on which wouldn’t be a problem if the thumb sticks were used.  It’s a shame the option to use either method hasn’t been offered here, although that said, with a little practice, it becomes fairly easy and quite natural to play, despite the constant need to reset. The game also uses an auto lock on system so that performing much needed headshots is easy and keeps frustration levels at a minimum. There are occasions where the cross-hair seemingly doesn’t respond properly, but these moments are few. The touchpad is also put to good use with various interactive actions such as opening doors, collecting ammo or health, and dodging attacks require a swipe motion and keep players on their toes a little.

Playing as two characters, there are some differences between them as Tony and Clarence’s missions are different in terms of the weapons used and play style. Clarence starts off with a 9 round silenced pistol for example and can pick up a rather cute sub machine gun. There’s an onus on more stealthy actions amidst the moments of carnage.  Tony on the other hand has access to a  6 round pistol, shotgun and revolver,  favouring more overt brawler type approaches with lots of John Woo style sliding moments and such like. The core essence remains the same though, and that’s to simply shoot anything that moves and time the reloads  and ducking into cover accordingly. Sadly there’s no penalty system for shooting innocents by mistake, in fact, there are so few it’s a moot point, but does highlight the game’s relative simplicity. Where similar games have adopted side challenges and other interactions such as choosing routes, it seems Blue Estate offers the basic game only with few challenge sections other than shooting select groups of goons in sequence and level specific inanimate objects such as beckoning cats.

In terms of presentation, there’s some neat visual elements as players move through the eight levels on offer shooting up all and sundry in first person which highlights some exaggerated rag doll physics to great effect. The game never lags and feels fairly polished despite offering some dull levels at times –  they just had to include a sewer system.  Where the game shines is in its narrative and humour which pours out at every turn. There’s lots of breaking the fourth wall, and an approach which fits the comic book roots which is good.

The game can be beaten fairly quickly, offering around two and half hours play at a stretch and then providing an additional difficulty to try out. The only real staying power for single players is the option to beat ones own score via maintaining combos with a breakdown of points shown between levels. There are also leaderboards to compare with the online community, but the real longevity comes from playing the game with two players locally and seeing who is the better shooter.

Blue Estate is a fun filled likeable shooter that works well  but is simply a little too short  for any lasting appeal.  Developers Hesaw haven’t attempted to add anything new to what could be considered a dead genre despite the quirky control method –  so in some ways a lack of reinvention places the game as rather average. It does provide some cool old school light gun style shooting without the gun which in many ways, is a shame as the novelty of holding a gun shaped peripheral is part of the appeal. As it stands, the dual shock 4 does provide a decent alternative and works pretty well despite needing to be reset quite frequently. The biggest issue surrounding the game is its value for money, as effectively this is more of an arcade party game rather than an extended single player experience. For lone players the current asking price is perhaps a bit steep considering the game offers no extra modes, or additional features once beaten.  For those with friends looking for something different to play, then this is perhaps worth a punt, although again, the lack of extras might hamper how long you play for.  If you’ve got money to burn, then you’ll find an enjoyable few hours playing, but if on a budget, then it’s advisable to wait until the price drops.