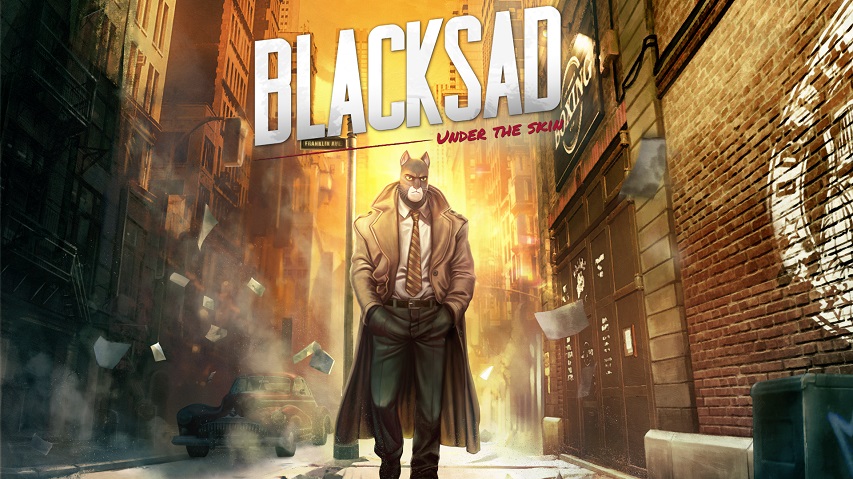 Take a look at our Blacksad gameplay preview after a 30 minute hands-on session with the game at Gamescom 2019.

We got some hands-on time with Microids, detective adventure game Blacksad: Under the Skin and came away with some mixed feelings. The game looks great that much is certain, but we weren’t feeling the pacing so much. This type of adventure game requires no distractions and time set aside to let it all sink-in.

Blacksad basks in an alternate 1950s New York City and is based on the Spanish detective comic book series of the same name. We say alternate because people are anthropomorphised animals which is the art of combining animals with human-like features. Furries as some may like to call them. Events kick-off with a request from the daughter of a recently deceased owner of a boxing Club. It seems he hanged himself leaving his daughter to pick-up-the-pieces. An upcoming boxer Bobby Yale about to embark on a career defining fight has gone missing too. The question for John Blacksad, Private Detective (that’s your character by the way), is the death of the owner and disappearance of the boxer related, and what exactly happened? Cue lots of frowning, head-scratching and looking for clues.

Blacksad promises a lot more than what we played in our 30 minute session. From what we can tell there is more depth to the gameplay than initially meets the eye. The opening fight scene where we died several times before inputting the correct button prompt showcased several ways to interact with the attacking rhino character with different results. The way in which you talk to people offers some choices and obviously consequences based on your selections. Quick time events features as well and as mentioned if you aren’t quick enough then you have to restart the scene. According to the blurb, the game boasts six endings which no doubt will be influenced by how thorough you are and what choices you made.

Another layer aside from interrogating witnesses and other shady characters is how Blacksad pieces together the clues to form a deduction. Interestingly, in the field he uses cat-like senses such as smell, vision and hearing to analyse situations giving him a distinct edge. He’s a ballsy character as you expect and not afraid of dishing it out which we like.

As mentioned though, the game isn’t all action-sequences and QTE button tapping. In fact the pace in the section we looked at was quite slow. Blacksad cannot move with any pace when players assume direct control over him. It’s a slow walk from one side of the screen to the other. Sure, this is great for taking in the details but it flies in the face of any urgency outside of directed scenes. The conversation with one particular lady felt drawn-out given that it didn’t provide any significant leads. Perhaps a deliberate way of introducing red-herrings for the player to determine.

We like Blacksad in terms of its visual appeal and its attention to detail. It’s a methodical game with well-developed characters. You instantly gel with John and his cohorts. However, this isn’t a game for all players and if you have an ounce of impatience then you might struggle a bit. If however you don’t mind taking it all-in, listening to every word and exploring all avenues you will find a likeable game that’s full of character, an interesting story and fun to lose yourself in because it’s visually quite exceptional.

Blacksad releases on November 5th this year on consoles, Mac and PC including Nintendo Switch. The game comes rated 18 for those unsure of the content. We expect this relates to colourful language and violence, we won’t go there with the “s” word. Hopefully when we play the full game in a more relaxed and less-distracting environment we’ll appreciate the pacing a bit more. We can’t wait.