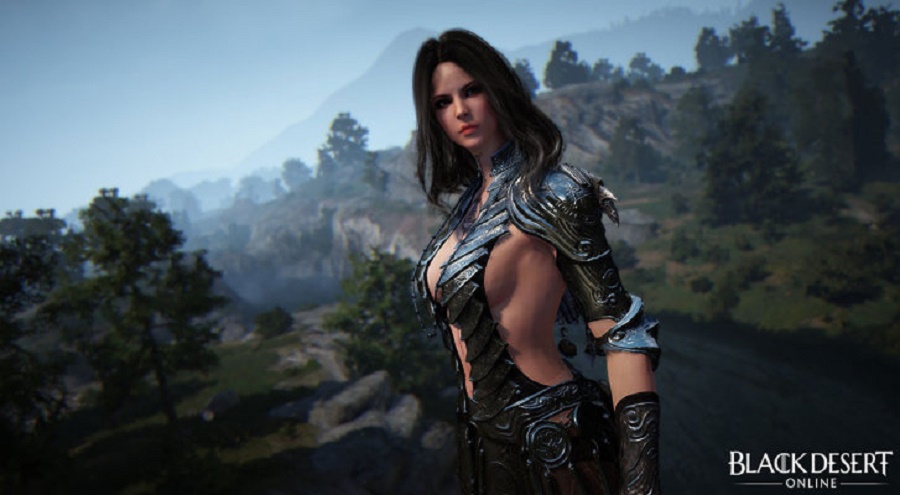 Pearl Abyss released their epic Black Desert Online in the West and with it comes a world of exploration and mystery in this massively multiplayer online role playing game (MMORPG). However, there’s quite a grind and a lot of intricate details to take in before you get to fully understand what’s required of you, although if going for a simple hack and slash outing then you can do that too with little need to go much deeper into the game’s inner workings. In a nutshell and with the impish looking Black Spirit as a guide, your character teams up looking for answers surrounding the Black Stones source of power. The Black Stones have corrupted the minds of the ancients and with it have led to the fall of civilisation cue the Calpheonians who seeks to claim their power and the Black Desert region as their own. It’s an interesting tale told via cutscenes and dialogue with various NPCs but is not something that’s easy to follow due to the open nature of the gameplay and being distracted at every turn. As a basic starting point once you’ve chosen a male or female character class
using the rather excellent character creation tools, you’re then able to wander the Black Desert lands kicking butt and gathering information. It has to be said, there’s too much to take in initially even if the game attempts to offer tutorial videos and external links to help out. You really have to take your time here and not bite off more than you can chew in the opening hours lest you get bogged down with too much.

The game does start off rather tame though and follows traditional MMORPG territory once the opening pleasantries are out of the way. You talk to NPCs using a neat system of intel gathering, undertake quests and then head off and kill X number of creatures being wolves, imps and other oddities or collect specific items, deliver them etc. It’s quite a basic premise which over a period of hours moves you deeper into the vast realm and upping the anti in terms of the enemies you face. In fact, the opening is perhaps way too easy in combat as you’ll be tearing through the wolves and imps without any concern using several attack buttons and specials. Whilst the game is designed for keyboard & mouse set-ups it’s also quite playable using a gamepad as long as you tinker a bit with the options.

The starting difficulty is a concern but as the easily tracked quests stack up you’ll be introduced to all manner of options such as gathering resources, mining, fishing, setting up a homes, node linking and trading amongst a slew of other side activities that don’t involve getting into direct combat. In this regard there’s loads to think about what you’re going to spend your time doing as following the main story arc is just one small facet of the entire experience – which often has the progress deliberately blocked to keep you rummaging through other activities. You can call on the Black Spirit at any time to guide you which is handy and as it grows in power so does your understanding of how the game works.

Eventually you’ll reach a point where there’s a bit of a challenge to contend with such as when the Black Spirit offers a boss battle where the sudden spike in difficulty can catch you off guard a bit. The standard enemies which populate the open map up their game a bit too even if they are a bit mindless in terms of their AI. That said, although there’s an abundance of health potions at your disposal, being too overconfident can lead to a swift departure. 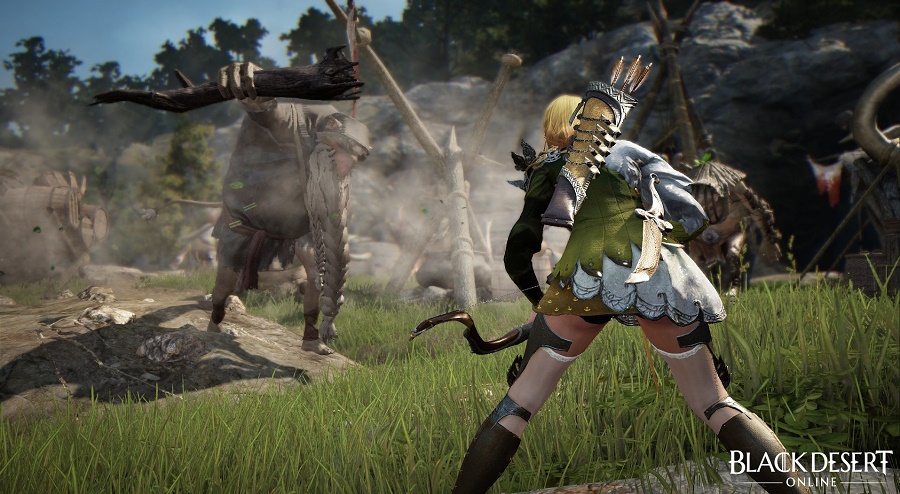 Black Desert Online relies heavily on the player grinding away for hours to increase the stats of the character. Whilst initially it’s fun it does get a bit tiresome after so many hours playing. In fact everything is a grind here regardless of what you decide to undertake and that even extends to travelling across the sandbox map. You’ll spend a lot of time running from A to B and if you’re fortunate to snag a steed such as a donkey or horse then the process is sped up a little. There’s no fast travel option here so you do get to see the world up close. Luckily there’s an option to auto run to your destination although if the terrain is more complex such as in towns then your character can get stuck, so it’s not like you can go off and make a cup of tea during those longer journeys.

Visually, the game’s main star are the characters and NPCs who look fantastic. The character creation options are probably some of the most detailed and best seen in any video game to date except there’s only one real flaw in that there’s limited clothing options which means you’ll often see a slightly different looking repeat of your character. Sadly, the game ties customization with paid for content using pearls which can set you back quite a bit of cash. These extras look fantastic but come as time based additions which just reeks of fleecing those who want to look different to everyone else. 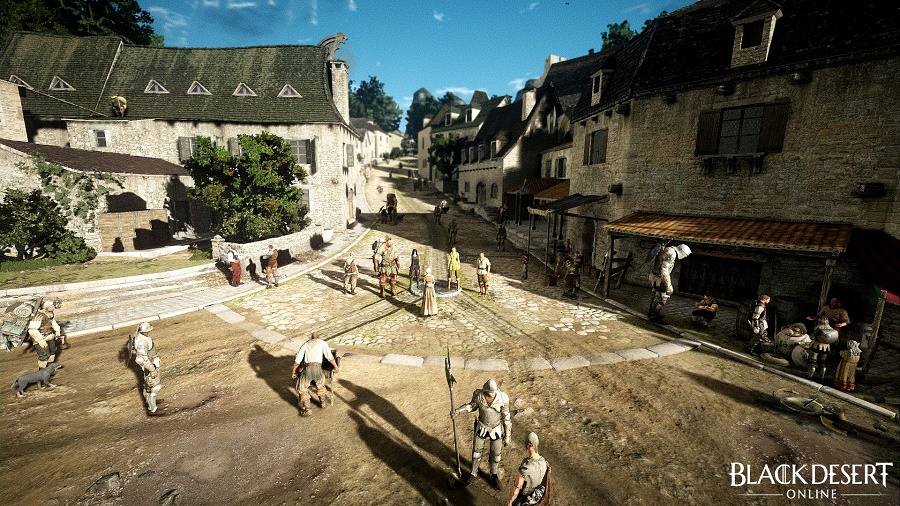 The game world is colourful and feels quite lived in with an abundance of NPCs to converse with and other players who act more like ghosts in your world considering you can pass right through them. In the field the groups of enemies like to just stand around doing nothing in particular looks a bit odd and could have been made to appear more menacing. As mentioned, there’s a lot of travel which means you get to see the variance in world map first hand which is good in some respects and bad in others – mostly due to how much time it takes to get anywhere. Performance wise it’s also not bad and with a selection of options to tinker with means high end GPUs should easily maintain 60 fps. Bumping up to 4K and the game shines and maintains reasonable frame rates although there are some issues with the text scaling which can be adjusted in the options but still comes across on the small side.

Audio is also reasonable although a little inconsistent where some NPC will talk and others will mumble a few words but have their actual message in text form. Coupled with an enchanting melodic/classical sound track and the game’s audio spectrum is quite varied although some looped sounds can grate after a while. 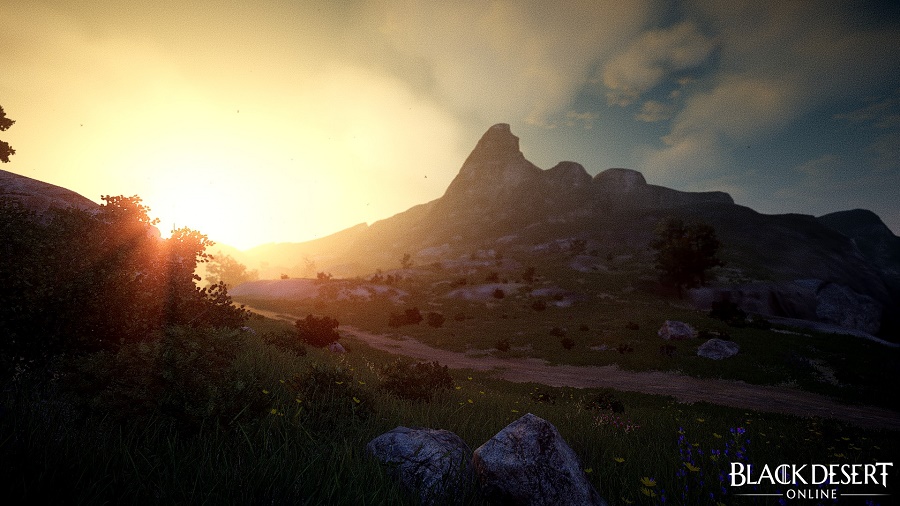 Aside from grinding for hours or selecting a new character class to do it all over again there’s quite a bit of stuff to sink your teeth into if you’re a fan of competitive/co-op play, there’s several guild options to fight for the greater good if that’s your calling but it’s still quite feasible to just play lone wolf and ignore all of that malarkey should you choose. With the wealth of options available to players in this massive sandbox world, it’s enticing and will eat away the hours although a lack of real dungeons is a shame as these are par de la course for MMOs and strangely the absence here lets the co-op gameplay down a bit.

If you’re a fan of MMORPGs and are looking for a game that will last you forever and offers a compelling sandbox world to do your thing in then Black Desert Online is a worthy cause to champion. Aside from the few oddities with its design, the money grabbing customization and the fact the opening gameplay moments are underwhelming, once you have gained your wings and understand that being a hunter, tamer, fisherman, cook or whatever tickles your fancy is a valid option you’ll be pleased there’s so much depth here making the initial overwhelming options something you’ll eventually be thankful for over the longer term.