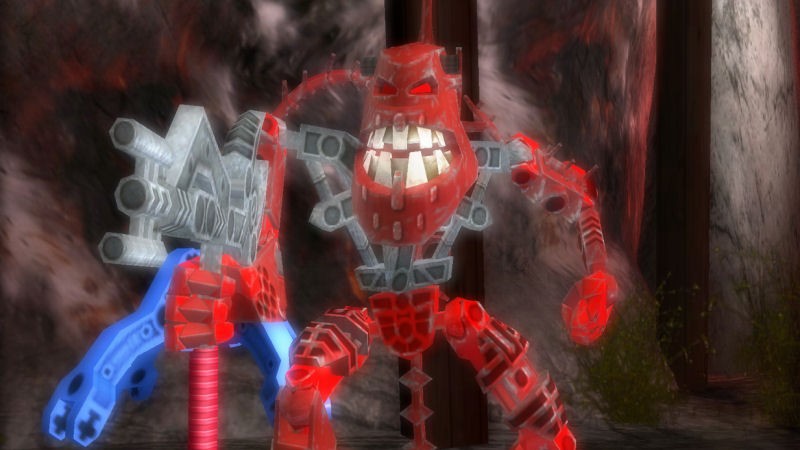 Following on from the success of LEGO Star Wars TT Games presents another LEGO inspired game, this time featuring the BIONICLE series of characters. In the game, players assume the role of mask wearing Toa Inika as he dukes it out with the Piraka to save the island of Voya Nui. BIONICLE Heroes is a third person action game and is suitable for all ages.

After playing the cuddly Viva Piñata, the free roaming CARS and now BIONICLE Heroes on Xbox 360 it is clear that Microsoft are attempting to remain faithful to their words and accommodate games that are more accessible to the younger generation, although in Viva piñatas case this is more down to the look of the game rather than gameplay. BIONICLE Heroes is neither cuddly nor free-roaming but as a game targeted towards the younger player has a lot to offer.

In game as players assume the role of Toa with the objective being to simply blow everything up that gets in you path including objects that don’t fight back; with various weapons that are gained by switching mask. Masks are found during play and other than giving you replenished health allow you to swap to another character. Each Character has their own movement speed and weapons which range from futuristic grenade launches to shotguns and sniper rifles. Once masks are collected, players can on the fly swap character as they see fit and obviously some are better in some situations than others.

The main onus of the game is to collect LEGO pieces which can be found by interacting with many stationary objects that litter the levels or by killing as much as possible.

Every time an enemy or object is destroyed it breaks up into LEGO pieces which can be collected. The LEGO collected can then be converted into upgrade items and other niceties from the game’s store.

BIONICLE Heroes uses a third person viewpoint with the character slightly to the left of the screen rather than centralised. This viewpoint was also used in Gears of War and works reasonably well although the camera and turning can be a little cumbersome at times. The levels seem to follow a set pattern of stages divided by creatures that act as checkpoints. To activate these dormant creatures, players must enter hero mode which is activated automatically when enough LEGO has been collected from the level. Once triggered the creatures will come to life and either open up the pathway for you or help you in the many boss battles that players will face. The boss battles and sub bosses are variations of the same theme and are pretty faceless as we are given only a brief introduction to the characters during the opening of each level.

BIONICLE Heroes isn’t the best looking Xbox 360 but does a reasonable job of conveying the various locations that Toa visits in his campaign. We have desert, fire, snow, forest regions to explore and whilst they all look different their design is very similar in terms of objectives. Once players get fully upgraded there is a chance to cause much carnage with explosive weapons and it here that a lot of neat effects are used and can create some screen shattering mayhem at times. Luckily there are no issues of screen tearing or drops in frame rate and so everything runs silky smooth even when there are numerous enemies on screen and lots of gunfire. That said, the game is a little low on the more realistic effects used in a number of games but I think during play and due to the type of game it is you aren’t really going to notice or miss things like dynamic shadows and lighting.

The sound can be highly frantic on the ears at times with some piecing gun sound effects mixed with themed music. I actually like the music, especially the theme which plays during the lobby areas. Each location has its own musical style and whilst these tunes might not fit into any particular category they just sound well suited for the game. There are few to zero moments where characters are voiced and if they are its more a grunt than anything understandable. Overall the sound works well as it combine old school arcade sounds with modern sounding musical score.

For anyone over the age of 16 then BIONICLE Heroes can be completed within a few days of solid play. There are some fiendish achievements which effectively require players to replay each level twice to unlock Gold and Silver Canisters. Whilst the game is ultimately fun the challenging aspect is certainly not represented for those of us who are older. For younger players I would say the challenge is just about right and will have little to few moments where players need to restart. Either way, the game in its entirety is a single player experience and one that once beat offers little else other than replaying the levels for the hell of it.

I’ve enjoyed playing BIONICLE Heroes for the sheer fact that it’s uncomplicated, easy to get into and a lot of fun. However on a negative I can’t help but feel the net could have been widened to include levels of difficulty for more seasoned players and perhaps more levels and objectives other than the same repeated sequences throughout the game. For younger players and ones that are especially into LEGO, will enjoy the game much more but when kids nowadays are wanting to play the big games like Gears Of War it makes me wonder what the wider appeal would be for a game which features no blood and comical violence. If you’ve got younger kids and aren’t going to give in to their demands for Dead Rising or Gears of War then look no further as this game will fill the gap and keep them occupied whilst you are safe in the knowledge that there is no swearing or adult themes on offer. For anyone else then this game is well worth a look if you are achievement hunting, if not then a rental if you are looking for something new to play.