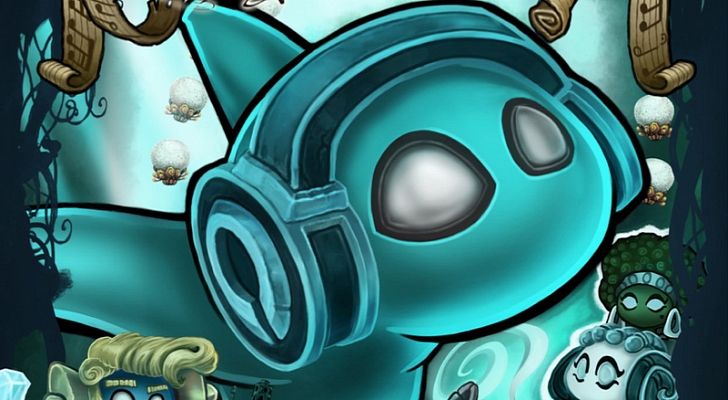 Today we’re taking a look at Threaks’ underwater adventure game Beatbuddy Tale of the Guardians which is available now on PC and Mac and later coming to consoles.

The game throws players into an odd underwater world where collecting items and saving one’s sister is the priority. What makes Beatbuddy stand out from the crowd is its use of music which pulsates through the levels and morphs around the gameplay. What might look like your average adventure game, sure doesn’t play like one as players need to time their movements with the beat of the music track playing. There are also interactive elements which act as instruments in the music track; so for example, hit a pulsating bass drum which darts Beatbuddy across the screen at speed, will make the appropriate sound within the track.

There are two forms to the gameplay where one has you controlling Beatbuddy where he can dash – again button presses are timed with the music –  attack enemies and interact with various watery elements to progress. The other, is when using the underwater craft which adopts its movement directly from the full music track which jumps into action during these moments. What’s also clever is how the enemy movements are also in time with the music resulting in some challenging moments of progression.

At its heart, there are a number of lateral puzzles which involve things like placing fuses into slots, positioning bounce platforms and tinkering with crab like hi hats to navigate treacherous caverns. When the game throws all its puzzling elements towards you at once, the game does become full on and offers quite the fun challenge.

Beatbuddy boasts some fine visuals offering an expansive underwater world filled with familiar looking creatures. There’s some neat effects using perspective in the backgrounds that reminds players of its watery theme and the cute looking main characters are dripped in cool. Whilst not the most detailed game, in terms of creating a animated look that’s highly popularized these days, the game does a fine job, although the levels are perhaps not very diverse.

Audio is perhaps the game’s greatest asset, sporting music tracks specifically mixed for the game that changes depending on what the player is doing. The soundtrack is impressive for all six levels, and the fact that it’s part of the gameplay puts a lot more focus on it than just background fodder.

Beatbuddy can be completed in around 6 hours possibly more if you struggle with the puzzles, or less if you’re quite the pro. The game beckons to be replayed to collect all the hidden orbs, and has a time trial element as well for beating the hour long levels in a speedier time. The orbs unlock various extras such as photos from the Threaks development team, but aside from this, there’s very little else to do once the game is bested – unless you’re an achievement hunter looking to beat the game in under three hours!

Beatbuddy Tale of the Guardians is a pleasant and enjoyable game which is perhaps only let down by a lack of extras. There’s some solid entertainment wrapped up with an excitable and bouncy soundtrack that is by far the best element of the game, but sadly the brevity of the experience might leave you wanting a bit more.