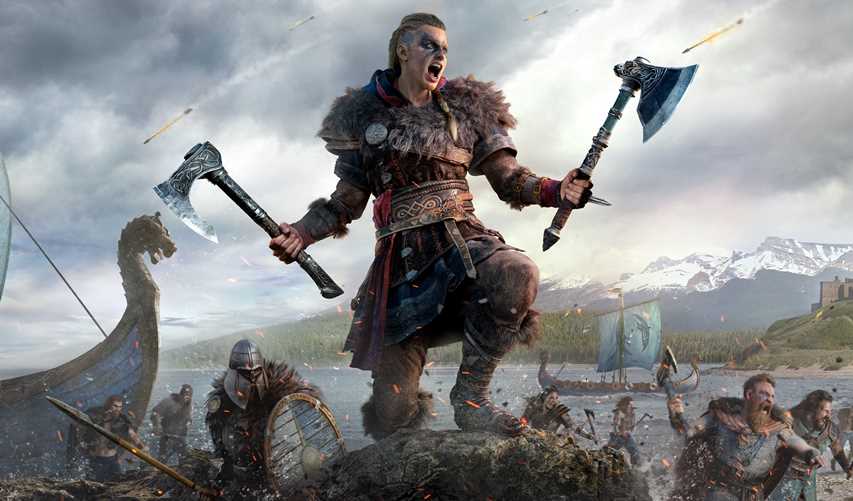 It has been a few years since Assassin’s Creed Odyssey (2018), giving team Ubisoft a little of bit of time to take in some feedback and adjust the development of the next game in the series. Assassin’s Creed Valhalla then, should be up-there with the greats right? Perhaps not, but first-things-first, a game is only as good as its execution, and whilst there’s plenty of blood spilt in Ubisoft’s latest game, the overall experience feels marred by the ever-presence of game-breaking bugs. Who’d have thought, the tiny critters could take-on the might of the Danes in England during the 9th Century. Either way, is Assassin’s Creed Valhalla worth the time and energy at present, or best left to stew a bit before diving-in?

Interestingly, Valhalla is the second game set within the UK (Watch Dogs Legion the other), but we digress. Assassin’s Creed Valhalla tells the tale of the Danes conquering England during the 9th century. You play as either a male or female Eivor, a fierce, brave Norse raider (or let the game swap and choose either at opportune moments on its own). Alongside her brother Sigurd, they set sail to new pastures for greater things after their father unceremoniously bows down to the Norse King Harald for peace in the Nordic regions.

Players set up a small settlement in middle England (Mercia), Ravensthorpe and spread the Raven Clan influence further into the territory by way of settling local disputes and aiding the Anglo-Saxons to become affiliates rather than enemies. Players grow their settlement into a bustling town by way of raiding nearby places of interest such as wealthy monasteries and military bases. This is the mainstay of the story, but there are several underlying hooks to be mindful of especially with regards to the motives and actions of your brother Sigurd. Whilst the game adopts a heavy offensive approach expected of Vikings, players choose to dip in and out of stealth and action gaming whenever it suits. That’s one of the game’s strong points. That said, players who want pure stealth will struggle with some of the game’s forced action-sequences, much like Odysseys big battles. Raids and stronghold assaults offer no-scope for stealth play. The revised combat system, means it’s also too easy to fight your way in and out of trouble. In all honesty though, the stealth feels broken here and almost an afterthought especially in comparison to the cool stealth play of Odyssey.

Ubisoft opts to go back to the game’s roots with the hide in plain sight mechanics, but this is problematic at best. To recap, Eivor learns stealth techniques from the characters Basim and Hytham who you meet early on in Norway and who travel with you to England. They look like the typical Assassin’s Creed characters from the earlier games. They reveal the Order of Ancients presence in England where your job is to take out the people of importance much like you did with the cult in Odyssey. Whilst some characters cross paths with the main story branch, others are free-form where it’s up-to the player to hunt them down via clues, then decide when and how to take them out. Unfortunately, the stealth in the all new “Distrust Zones” and “Restricted Areas” doesn’t really work well for all-intents-and-purposes. The slightest wrong move and the patrolling soldiers are on you like flies to poop (sometimes spotting you through solid objects or unrealistically from far away). There’s often very little time to recover once detected (giving you less than a second to react). Movement to stay undetected is painfully slow that as previously mentioned, it’s far easier to just fight your way out of trouble. A massive shame then this doesn’t feel right. It also feels like the game wants players to act like the Viking warrior rather than a sneaky assassin.

Note: We started the game on the harder stealth setting for challenge, and then changed it back to default due to how unforgiving it felt after several hours play. Due to the number of bugs in this game, It’s entirely possible the game ignored the new easier stealth setting despite saying so in the options. That would partially explain how the stealth doesn’t feel right. There’s no way of checking this though without starting a new game.

Stealth play can work though with a little patience and using night as cover for example, with less reliance on the cloak. Hiding in undergrowth, luring guards, using the bow and attacks from above are all here, so it’s not game-over for stealth play. It’s just not as easy or fluid here. One thing that we feel is much better is your Odin vision and raven companion who this time will only mark areas of interest rather than highlight all the enemies. This is a fairer system as it was too-easy having all enemies marked before entering restricted areas in Odyssey. So the stealth gets some things right, and others not so much. Hopefully Ubisoft can refine the settings in an update.

On to the combat then, which is something you will be doing a lot more of in this game. It’s more of the same as Odyssey, but this time you have a stamina bar to be mindful of. If you dodge evade, this uses stamina as do heavy attacks. However, you replenish stamina by backing off, or going on the offensive with light attacks. It’s a neat system which loses the infinite evasion of the past, but perhaps a little too-forgiving due to how powerful the light attacks can upgrade to. Alongside special moves you can perform with adrenaline gained by the new skill tree system (or found in the wild) , there are an abundance of really neat finishers where the camera pans up-close for increased effect. Expect to witness plenty of gruesome executions that look fantastic and bolster the feeling of power you have playing as Eivor.

Assassin’s Creed Valhalla then offers an interesting fusion of stealth, action, exploration and story-telling. In fact, the story missions are engrossing and present an assortment of varied characters that keep you hooked on their tales and plights. That’s all pretty good if you can ignore some of the other niggles here. However, the game falls apart with numerous bugs and glitches rearing their ugly heads. At times it feels like a rushed release given the severity of some bugs. Examples include, NPCs not aiding in opening doors during raids despite no enemies around (meaning you can’t finish the raid). Button presses not registering during combat, crashes to desktop, and some really funny ones such as during an important death cut-scene, a wolf walking over the dying person blocking the view. Raids where your companions refuse to leave the boat. There are a number of them, with some requiring a game restart. It’s not good, and whilst we can appreciate there are always going to be bugs in a game of this magnitude, it’s disappointing when they are so frequent and disruptive. In this regard they let the working parts of the game down considerably which is a crying shame.

Visually, using max settings on PC and 4K resolution the game offers some fantastic visuals overall. A stand-out moment for us was storming a stronghold from the sea at night, with fire arrows raining down upon us as we surged forwards. Utterly breath-taking! Other moments such as the great vistas across familiar parts of England feel almost like fantastic works of art. That said, some areas look better than others but mostly it’s of a high quality. That goes for the main NPC characters as well when viewing up-close during cut-scenes. However, lesser NPCs seem to repeat too frequently and are of a lower quality which is a shame. England looks well-realised, and offers diverse locations including, neat moments of rain, fog, snow and sunshine. This all comes at a very high cost though. Using the game’s benchmark tool, our RTX 3090 struggles to maintain 4K 60 fps using the max settings, even lowering them down to High or Medium it’s not consistent. There’s perhaps some optimization issues going on under the hood.

Once again, audio is of a high-standard with a great soundtrack for action and exploration sequences. The voice-acting is also pretty decent with solid performances from Cecilie Stenspil who voices the female Eivor. No complaints here whatsoever.

In terms of longevity, this is where Ubisoft games often fall into the trap of repetition. It seems though some things have changed in Valhalla what with world-events offering puzzle-like moments with the weird and wonderful. There are side-quests galore, and meaningful plundering of hidden treasure. The synchronisation returns, but is not essential unless you miss having more fast-travel points on the large map. There’s quite a bit of player focused tailoring to make the experience easier or tougher which is great. Expect to rack-up plentiful hours (40+) with the base-story and what’s on offer out-the-gate then. As mentioned already, an abundance of assassinations of the order (replacing the cult of Odyssey) and many places to explore and plunder to build your base of operations in Ravensthorpe. Often tied to your power level which replaces the numbered levelling of previous games. As mentioned, levelling is skill-tree based where XP awards points which players spend on slight character upgrades and new moves. Weapons are less important here where any weapon and armour set can carry through the entire game rather than the looting of the past. This is a better system by far, now placing less importance on menu hopping and more on upgrades.

To conclude then, Assassin’s Creed Valhalla feels like a more action-orientated experience due to its subject matter. This part of the game is an improvement, as is the management of the character(s). However, stealth seems to suffer as a result due to the game’s tuning and abundance of prying eyes. England and the 9th century are a great setting for the series and visually Ubisoft have done a fine job of recreating our lovely island. The story presents an assortment of scenarios for the player to work through as they conquer England, though force, diplomacy or guile. However, no matter how great the story or optional side-questing, the game becomes severely let-down by bugs and expected glitches. The latter is easy to overlook, but the former often impacts play which is a massive shame. In this regard it might be prudent to wait for more patches. That said, if you’re willing to endure, you will find an entertaining romp with such a great subject matter. Plus, there’s still plenty of assassin action within this Assassin’s Creed instalment.