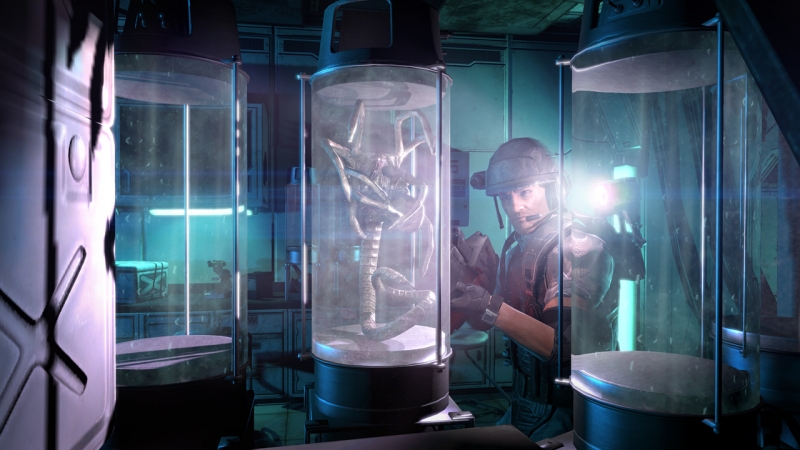 It’s been a long while since we’ve had a great, thrilling game based on the Alien universe, and with Gearbox Software – of Borderlands fame – at the development helm of Aliens: Colonial Marines, and key cast members from the films on board for the game, we should have (had) a great game on our hands.

The rather jaded story of Aliens: Colonial Marines takes place after the second film, and with what liberties are taken, it’s not presented in a good or convincing manner. On paper, Colonial Marines sounds promising, with several actors reprising their roles for the game, and you, Corporal Winter, along with several other U.S. Colonial Marines go to investigate after receiving a distress call; naturally this leads to a Xenomorph infestation, and so the fun begins – or so it should.

The game references several scenes from the films, such as our Colonial Marine’s walking on by and discussing Bishop’s slashed Droid carcass, and while these are certainly interesting, the game itself makes little effort to push forward with its own story, and when it makes an attempt to shock and surprise, it ultimately disappoints.

It’s not all doom and gloom, Aliens: Colonial Marines does show some early promise, with few gameplay elements that do actually compliment and give a nod to the films. In particular one mission has you weapon-less and down in the sewers amidst a horde of sleeping Xenomorph who will awaken at the mere sound of movement, only to charge at you, and to sniff you, or blow up and kill you depending on your movement. It’s the only sense of fear throughout where you feel powerless, and it’s an exciting moment where you hope things are on the up; shortly after you’re chased down by a Xeno, and welding doors behind you as you go to dash for the elevator.

The Xenomorphs however won’t fill you with fear as well they should, instead of fear and scare tactics, the focus is purely on numbers, with areas often requiring to be defended as the Xenomorphs begin to swarm in from all directions, and yes, they even come through the walls. There’s plenty of trodding along between point A and point B to hit switches, defend, then on to point C and D to do it all again. It’s generic progression at best with no real challenges presented throughout.

It’s not just Xenomorphs trying to kill you – well not all of them will even try, a few might, some might just hop down from the ceiling and hobble along over to you, bad back and all, just begging to be put out of their misery. Regardless, Xenomorphs will at times pose a threat, there main purpose is clear, just swarm you in large numbers for you to shoot them down. While this is called an Aliens game, the biggest threat isn’t the Aliens, but rather Weyland Utani’s mercenaries, who offer up traditional gun-play and require you to clear room after room of the corporate mercenaries, like every other military shooter before it. Needless to say, Aliens: Colonial Marines begins to grow tiresome all too quickly to the point of becoming tedious. 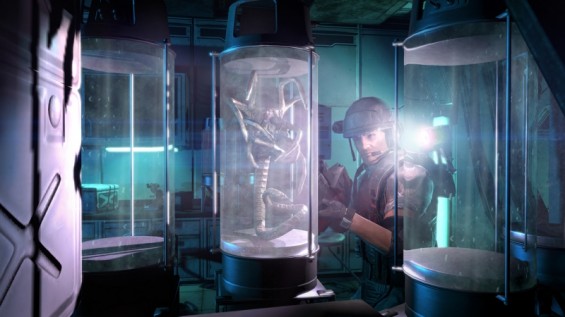 The environments are particularly impressive and reminiscent of the Aliens lore that they’re portraying, much of the level design and interiors are rather well thought out, providing a good contrast between large outdoor environments, to the nook and crannies of tight corridors of the interior structures, flickering lights and all. While the game mostly offers up tedious combat encounters, the settings in which they take place are adequate. It’s one of the very few things the game does well, the only disappointing aspect is the lack of polish throughout the entire campaign.

The voice-actors do an adequate job on some instances, but there’s a real lack of emotion and sense of dread throughout much of the dialogue, which is all the more lifeless in conjunction with facial animations and expressions – besides lip movement during dialogue, there isn’t any character emotion to be seen. The game’s cutscenes are also abysmal in their storytelling, not just because of absurd screen-tearing issues but because they feel place-holder and rushed.

There’s a cutscene between each mission, and each mission does typically take place in a large environment, with no other loading screens to be seen or other cutscenes in between to break it up; this may indicate why the game’s visuals are so unappealing. The visual presentation in multiplayer however is certainly a step up from campaign, perhaps it’s down to being on smaller maps, but the lighting effects in particular, and shadow casting is much more pronounced in versus play. It’s even worth whipping out the iconic Motion Sensor for versus – this can be used in both campaign and multiplayer, but you’re not worried about being attacked in campaign, in multiplayer the Motion Sensor is actually beneficial, and the sound effects bring with it a hint of nostalia – the same can also be said for the signature Pulse Rifle weapon, as it thuds rounds through Xenomorph flesh with audible delight. 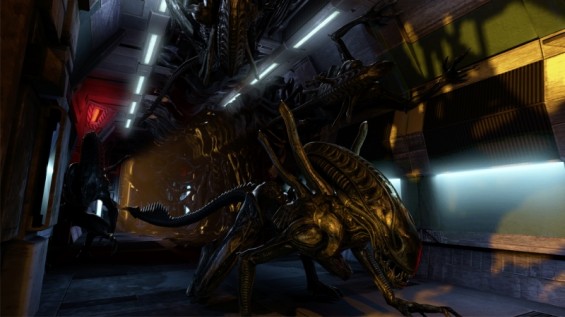 In terms of feature-set, Aliens: Colonial Marines ticks the right boxes. The single-player campaign can be played 2-player split-screen or by upto 4-players online. As much of a miserable experience as the campaign is, there are little trickles of Alien goodness to be found. Typically, throughout the campaign as a U.S. Colonial Marine you’re part of a squad, meaning you have other A.I. marines with you gunning down the Xenomorphs. If co-op players jump in, for some reason they add to the numbers and don’t fill the boots of the existing marines – if you have a full 4-player co-op experience, in addition to the A.I. marines in your squad, you’re looking at seven marines total, that’s a lot of fire-power for many of the cramped and narrow corridors.

While the campaign is an abysmal mess and clearly should not have been released in its current state, there is a saving grace in all of this – that’s multiplayer. No, it’s not ground-breaking, no it’s not perfect, but it’s heaps loads more entertaining than campaign, and the tension, sense of dread when your squads back is against the wall, that is delivered in multiplayer.

The modes of play featured are TDM, Extermination, Escape and Survivor, and as you might expect, it’s the U.S. Colonial Marines vs. Xenomorphs. What’s particularly interesting about multiplayer, besides the fact that fear and tension are better presented due to unpredictable player behaviour, the visuals, while not mind-blowing, they are somewhat improved over the campaign offering.

Playing as the Marines typically means you must stick together for a better chance of survival, and depending on mode, you may have to quickly weld all the doors shut and hunker down and defend an area for a set amount of time, while the Xenomorph players have an unlimited pool of lives to try and kill you with. Escape is a highlight for multiplayer, in similar vein to campaign the Marines must progress from location to location with the goal of reaching their extraction point, whilst as the Xenomorph’s you must stop them in their tracks.

It’s clear that Xenomorph play is inspired from Left 4 Dead, with the Aliens featuring three classes; the Spitter – whose primary attack is to spit acid from great distances, the Lurker – who can pounce on Marines and claw ’til their death, and the Xeno Soldier – whose brute force and melee attacks are all the more deadly. Naturally the Xenomorphs are much more nimble and crawl along walls, ceilings and generally move about the maps through vents and lay in wait for the perfect opportunity to strike. 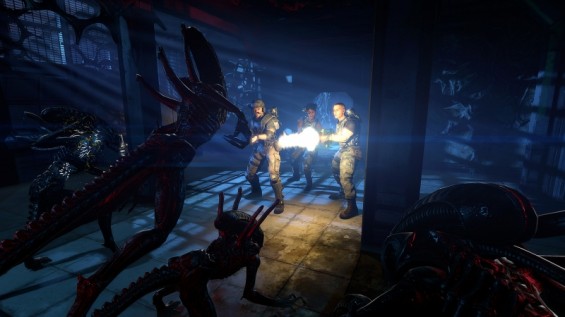 The main downside to multiplayer is that the Xenomorphs are only deadly at close range, with the exception of the Spitter. The real challenge is getting up close and making use of your surroundings, and it’s much more hard work as Xenomorphs going up against Marines who actually communicate. It’s a shame that like Left 4 Dead, Alien’s Colonial Marines did not incorporate swarms into multiplayer – they certainly feature in campaign, as pathetic as they may be, at least in multiplayer they could have served as a distraction alongside Xenomorph players.

While versus play fairs better with actual tension delivered, the overall package is ultimately tarnished by the shameful campaign offering, and the strength of the multiplayer alone is by no means enough to justify a purchase.

Aliens: Colonial Marines is a sure-fire disappointment, a borderline insult to fans of the franchise, though it’s by no means forgettable and may yet prove to be 2013’s most horrific game.