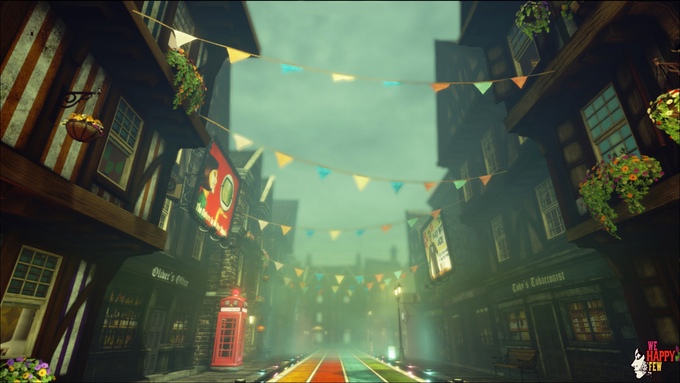 Compulsion Games has today announced that its forthcoming surreal game We Happy Few has been successfully funded via its Kickstarter campaign amassing some $263,000 of its $250,000 target with four days left on the clock. There’s still opportunity for some of the stretch goals to be reached, so what are you waiting for.

About We Happy Few:

We Happy Few is the tale of a plucky bunch of slightly terrible people trying to escape from a lifetime of cheerful delusion. Set in a drug-fuelled, retro-futuristic city in an alternative history 1964 England, you’ll have to blend in with its other citizens, who don’t take kindly to people who don’t abide by their not-so-normal rules.

It’s a first-person game, set in a procedurally generated, fully 3D city that you must escape before society collapses around you. But, like any good roguelike, you’re probably going to die a few times before you figure out how it all works.

You will need to learn how to conform and avoid suspicion. You will need to hunt for supplies, and craft the devices and weapons that enable you to make it out of town alive. What do the Wellies approve of you doing? What makes them suspicious? What turns them into a homicidal mob? And is there anyone here who can help you?

Welcome, my friends. It’s another fabulous day in Wellington Wells.