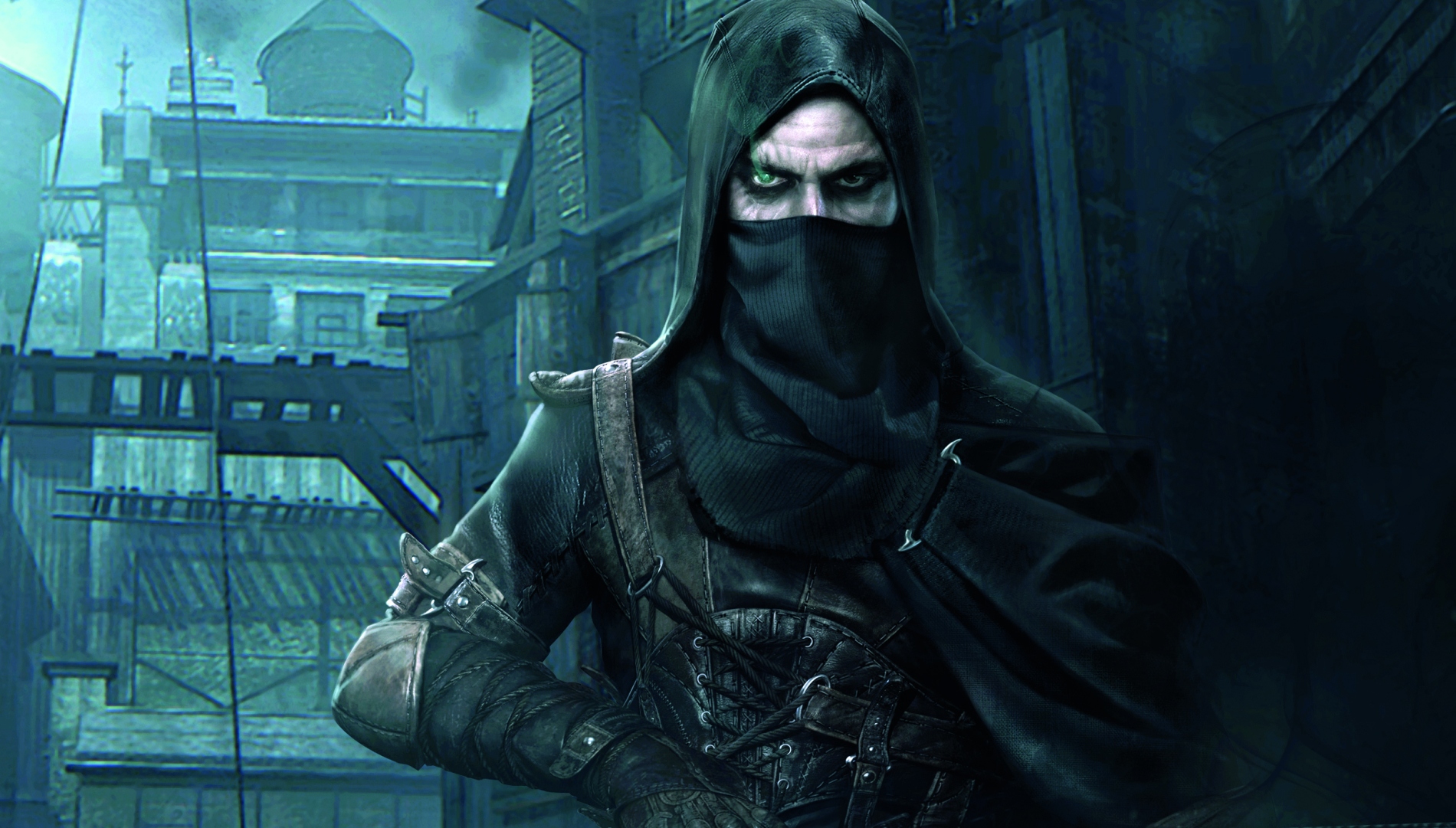 We take a look at Eidos Interactive’s massive and eagerly anticipated Thief game which released on consoles and PC after so many years since Deadly Shadows. With a refined engine and lots to do, is this latest game in the long running series a worthy addition, or lacking in what made the previous games so enthralling.  Take a look at our Thief video review for the full picture.

Today we’re taking a look at Eidos Interactive’s latest game in their Thief series in the aptly named Thief which released on last gen systems, Xbox One, PS4 and PC and comes some 10 years after the last game Thief III Deadly Shadows. Rather than harp on about previous games in the long running series, and how this latest game compares, we’re taking the game at face value and judging it on its own merits simply because ten years is quite a long time and perhaps expectations have changed.

In Thief, players assume the role once more of master thief Garrett as he and sidekick Erin embark on a mission to steal stuff from a not so good and nefarious Baron character who has gripped the Victorian city with his troops amidst a deadly disease called the Gloom which is dropping the city’s inhabitants left right and centre. There’s a curfew of sorts leaving only the watch on guard and opportunity for Garrett to sneak about stealing as much loot as possible whilst completing the main story arc which we won’t spoil for you here.

The story itself is fairly simple ,quite easy to follow, and during its finer moments has players sneaking into buildings and stealing important items of interest. What is neat is the fact that there are optional objectives players can strive for, simply by being thorough with their searches and perhaps looking off the beaten track. Throughout each of the eight levels, there’s a ton of extra loot lying about waiting to picked up, and of course naturally being a thief, Garrett makes no bones about collecting said extras. The game throws a fair assortment of puzzle elements as well such as lock picking doors and chests, uncovering picture frames which reveal hidden safes – which also need cracking, and a number of traps which can prove fatal if not careful. Luckily, Garrett has a focus ability which allows for him to highlight items of interest at will. Whilst not infinite, focus is most useful and in a way simplifies the element of exploration.

One of the game’s biggest features is its bespoke options which allow players the chance to start a fresh campaign with a number of modifiers which ultimately make the game much tougher. Things like game over if detected, no focus and such like can be toggled, and once set, remain for the duration of the campaign and can’t be changed. Luckily, there are several save slots on offer, so it’s quite feasible to have multiple games going to suit ones  mood. This is a great design choice which goes way beyond the traditional easy, normal and hard options we’re used to, and certainly does change how the game plays.

In game, Garrett moves like a tank rather than the nimble dodger one would expect, and this is exemplified when moving with any pace. Unfortunately, movement such as climbing is context sensitive which takes away the feeling of freedom. That said, the general gameplay style is meant to be slow and methodical, and for the most part crouching and moving between the shadows to remain hidden at all times is key to success rather than running and jumping all over the place. The game does throw some spanners in the works with natural elements such as lightning , enemies who move around carrying torches, noisy birds and caged guard dogs, but with careful timing and planning can be overcome with relative ease. There are some interactions with the environment using a number of tools such as a bow with various types of passive and aggressive arrows. The former allowing players to shoot out torches or cause distractions.  There are other tools which can be purchased from various vendors, and become a must if one is to navigate the open sections of the city. It all seems to have its bases well covered, although unfortunately the enemy AI is a bit hit and miss and seems to let down the overall effect of the game.  Garrett has a special move available which feels a bit like cheating which allows him to dash from cover to cover without being seen and regardless of whether he’s being looked at. It’s almost like a teleport move which just feels a bit out of context here.

The city itself is pretty dark and devoid of much life considering the Gloom disease has left many inhabitants simply dying on the streets and the whole game is set during nightfall. There’s a bit of hustle and bustle during the opening section, but this gives way to a less crowded game for the duration. The game world is split between the main city hub and mission areas where the hub can be fully explored and side missions offered and completed by way of simply navigating the tight alleyways and rooftops using acquired tools. It’s a bit formulaic, leaving most side missions devoid of activity and simply repeating the same tasks of entering rooms, stealing stuff, then exiting with little interference from the inhabitants.   In many ways, the game present too many areas devoid of activity making for a less challenging game.  That said, when it works and at its heights, the actual thieving is of a top quality and captures excellently here as players time their moves and skulk about the shadows looking in every draw, cupboard or on patrolling guards. Whilst not overly realistic in its approach, does provide some solid stealth moments.

In terms of looks, there’s a fantastic dark and foreboding city on offer here drenched in the kind of moodiness one would expect when playing as a anti-hero type character. Whilst not as open world as perhaps suggested, the games’s tight alleyways and streets make for excellent stomping grounds to move around in first person. There’s perhaps a lack of variety with enemies and the few non hostile civilians that litter the streets, but then again, the game does feel more like a showcase for exploration which presents some varied and fine looking rooms.

On a technical side, sadly, the Xbox One version does suffer from dips in frame rates at times which cause jerky movements, but for the most part, due to the slow nature of the gameplay doesn’t impact it too much.

Audio is also of a high standard with some solid voice performances and a cool and imposing soundtrack that fuses classical with electronic. The latter feeling a little out of place given the time period the game is supposedly set it. There are problems though with balance, where audio will cut out when moving out of range, or remains extremely loud regardless of the proximity to the source. This is somewhat jarring and simply suggests the game’s audio whilst accomplished, isn’t very well implemented.

In terms of longevity, there’s a long campaign and side missions to complete which takes quite some time and means there’s lots to do before the end credits roll. Then as mentioned already, players can fine tune the difficulty to make for a more challenging experience. There are also several side challenges separate to the campaign which can be tackled and compared using online leaderboards, making for a game that doesn’t scrimp on overall content for the asking price which is good.

To conclude, Thief does a grand job of placing the player into the shoes of a master thief with some fairly competent and engaging stealth mechanics despite the AI being a little off at times and movement being quite restricting due to its context sensitive design.  There’s some great atmosphere created during the story which exemplifies the sneaking around and feels just right despite the onset of the supernatural which somewhat tarnishes the game’s realistic slant. There are some technical issues with audio and graphics which does have an impact on play, but not to the point of being game breaking, but due to the forgiving nature of saving the game anywhere means that players can reload should anything major happen that causes one to be discovered and in unfair manner. If you like stealth games, then this is well worth checking out even though there are essentially three play styles on offer which allow for ghost or predatory approaches. The custom options are a most welcome feature and the overall vibe of the game is well met. If you’re a more action orientated gamer, then perhaps this isn’t for you, but the long and short of it is, this is stealth by numbers which can be viewed as a positive or negative.