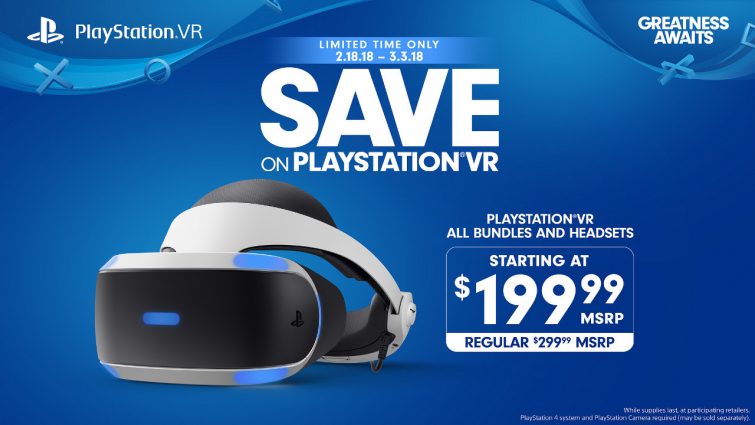 Here is a message from Mary Yee, Vice President, PlayStation Marketing, SIEA regarding some reduced prices for the Playstation VR although be warned this is a limited time promotion which ends on March 3rd. You can scoop the PSVR from as little as $199. No word as yet whether a similar promotion will occur in other territories but now would be a great time to jump in to VR.

Our PlayStation VR holiday deal was such a popular promotion, we’re bringing it back to our fans. From Sunday, February 18 through Saturday, March 3, 2018, PS VR standalone headsets and bundles will start at $199.99 (MSRP).

It’s a great time to pick up the PlayStation VR Doom VFR Bundle, which comes with a PlayStation VR headset, PlayStation Camera, the PS VR Demo Disc 2.0 and the Doom VFR Blu-ray Disc. Doom VFR brings the fast-paced, kinetic gameplay fans of the series love as an all-new virtual reality experience. From an entirely new perspective, Doom VFR transports you to the UAC facility on Mars and the depths of Hell, as your skills are put to the test through intense combat. $299.99 MSRP (regularly $399.99 MSRP).

This PS VR promotion is available at participating retailers in the U.S. You can find more information here.

This deal comes at such an exciting time for PS VR, with recent launches such as The Inpatient and Accounting +, and upcoming titles like Moss, Bravo Team, and more! There are more than 150 games and experiences available that are compatible with PS VR, and more than 130 highly anticipated games and other entertainment content expected to launch by the end of this year. There is so much to look forward to for PS VR this year and we can’t wait for you to experience it for yourself.