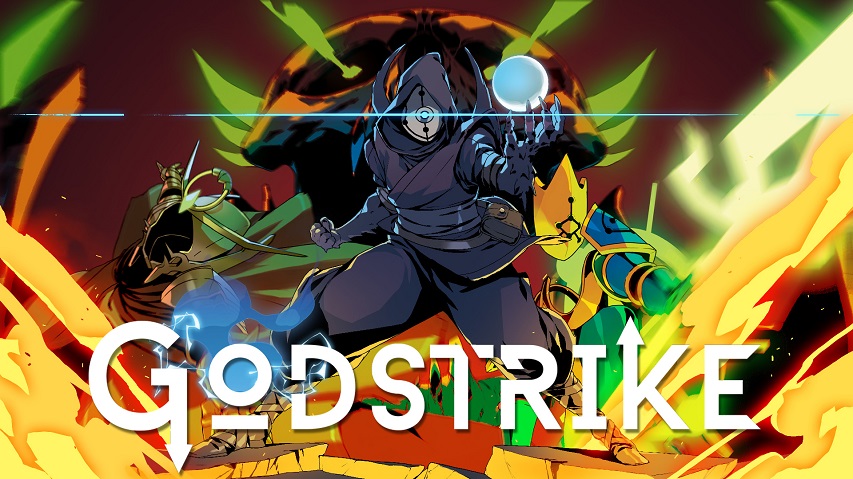 As I’ve gotten older, I would like to think that I’ve become better at evaluating the quality of a game using objective metrics and rational conclusions over whether I simply enjoyed the game. Fun factor is always important, but if something is well made and appeals to a niche audience, then I try to never penalize its score just because it may not be for me. This benefits Godstrike, because after being metaphorically punched in the face by this game for 12 hours, I was playing less because I was having fun and more because I was going to beat that damn boss if it was the last thing I did before I wrote this review.

Godstrike is quite hard. It is a top-down, bullet hell, boss rush, twin-stick shooter which uses the left stick for movement and the right stick for shooting. You can map various special abilities and attacks to your shoulder buttons, and if you have not guessed it yet from this paragraph, you should only play this game with a gamepad and not a mouse and keyboard. There are no “levels” where you progress toward a boss like in R-Type or Einhander. The player is dumped into a training and preparation area to equip available abilities, and then it is off to face the next boss. Instead of player health, there is a unique time mechanic where each boss fight has a set amount of time to complete it. The abilities you equip reduce your overall time based on the power of those abilities and must be powered up with souls that are strewn about the boss arena. There are also, mercifully, passive abilities you can equip that do not penalize your time that can bolster your defense, which you will need, since instead of having a life meter, hits the player takes from the boss take 15 seconds off your already dwindling clock. Once the clock reaches zero, you can take one more hit before you lose and must start the boss fight over from the beginning.

Godstrike is hard. The story mode is interspliced with an opening cutscene of lore and cryptic paragraphs during load screens as you unlock abilities by defeating bosses. In the arena mode, the pretense of a story is eschewed in favor of simply giving you access to every ability and allowing you to customize your loadout however you like before taking on any of the bosses in the game. The boss selection could use a little work, though. It only has the boss logo floating on some nearby cubes instead of a name or picture. There’s also a challenge mode (and a daily challenge mode to keep things fresh!) which gives you a preset loadout against a boss chosen by the game, and a leaderboard to keep track of everyone who is better than you at avoiding millions of bullets.

Godstrike is very hard, but it’s also very pretty. I’m not quite sure how to describe the art style. It doesn’t quite look cel-shaded, and the closest graphical style that comes to mind for me is Breath of the Wild’s. The use of color is gorgeous, and the contrasts are very stark, leaping out of the screen in a way that I really appreciated. However, with so much STUFF on the screen at the same time (bullets, floating orbs, souls, additional projectiles, your projectiles, the environment) and shadows for seemingly every single one of these things, I was sometimes having a hard time tracking everything that could damage me. You can turn off shadows for bullets, but not for everything in the game, which I wonder if having the option to do so would’ve made it easier for me to focus on avoiding attacks using my periphery. I should also praise the sound design. While the effects are serviceable, the music is fun and energetic, and it intensifies as you chip away at each boss, life-bar by life-bar, form-by-form.

Godstrike is freaking hard, and one of the reasons why is the very mechanic that defines it, the time-for-life mechanic. Taking a 15 second penalty is a huge blow, and there isn’t a difficulty slider to reduce the penalty to a 10 or 5 second penalty, or even increase it to a 20 or 30 second penalty. Not that I could handle that, but I’m sure many folks who thrive in this genre could. If you fail enough times in a row, the game does condescend to you and allow you to put it on Game Journalist mode (or “easy,” as it calls it), but I don’t need your pity, Godstrike. Do you think you’re better than me or something?!

Sincerely, though, and in all seriousness, Godstrike is a fantastic and well-crafted game that I can wholeheartedly recommend to fans of the genre. More casual players could have a great deal of fun here, as well, as long as they go in expecting the challenge. While it could stand to have a little more content, I expect the developer to continue to support this for years to come, and at such a fair price from the start? You can’t really go wrong.