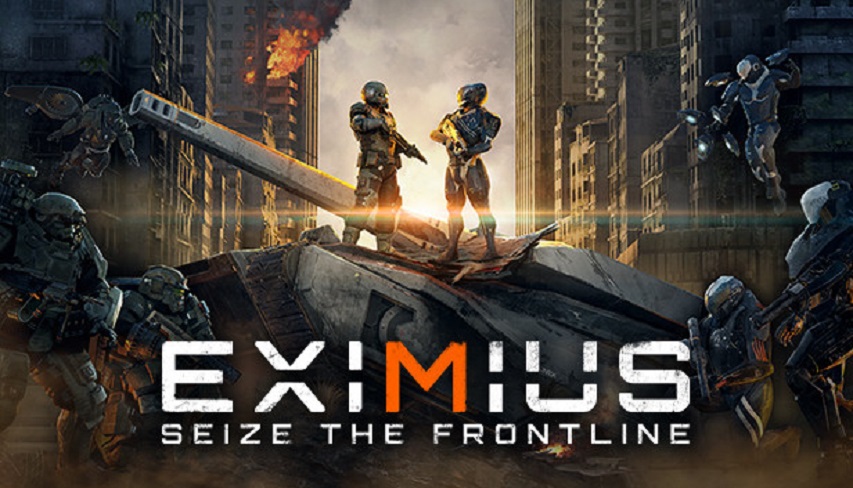 Ambitious is an excellent single-word description for Eximius: Seize the Frontline. While not the first game ever to attempt to blend real time strategy with a first-person shooter, it may be the first game to try it on such a large scale from the ground-up instead of being a mod for an existing game or built from a mod. A wise man once told me that you can’t pay your bills with potential, however, and the same can be said for ambition.

Eximius’ current configuration is a 5 versus 5, multiplayer-focused, attrition-oriented game mode. This is the central basis for nearly every aspect of the game. Each team is given a set number of victory points at the start of each match, with the goal of whittling the other side’s point total down to zero. Each of the five maps has three capture points that work toward the retention of your victory points and the loss of your opponent’s. Along the way are resource nodes to amplify the influx of one of the three types of resources that your team commander needs to build more structures or train more troops. These resources automatically flow into your team’s pool and their rate of increase can only be improved by capturing these nodes.

One of the five players plays as the team commander, who can swap back and forth between first person for running and gunning out in the field, and a traditional birds-eye view for RTS troop and resource management. The other four players each play strictly in first person, with limited control over units assigned to them by their commander. Most of your team’s success will come from these “officers” but having an AI squad backing you up can certainly make a difference in a fight against the other team’s players. Even in an offline match, giving your AI officers troops will drastically increase their chances of surviving and succeeding in their push for capture points and resource nodes.

Currently, there are three game modes, which are Player versus Player, Skirmish (which pits a team of players against an AI team), and co-op (which allows a team of players to take on a handful of specific challenges, like getting a convoy to a destination). Players can use individual resources (separate from the army’s pool used by the commander) to customize their loadouts at various armories, either at their base or placed in the field by commanders. However, players can also save their resources to buy an advanced battlesuit that allows them to use a variety of special abilities, like cloaking, dropping special mines, or even calling down artillery strikes. Both armies, the more modern-day Global Security Force and the futuristic Axeron Industries, have unique arsenals and battlesuits, changing how the commanders and the officers may choose to engage the other side.

On paper, this is all very intriguing, and seems exciting to try out, but in execution, Eximius is an unfinished game with a steep learning curve that only the most hardcore strategy fans (with a simultaneous itch for a shooter) should spend their money on.

After several weeks on the market as a finished game, Eximius still has no functional matchmaking for any of its game modes. If you try to jump into any mode quickly, the game still informs you that the matchmaking isn’t ready yet and encourages you to use the server browser. Having a server browser is great, and every game should have them as a multiplayer option, but currently you are just as likely to enter a game full of new players who have no idea what they are doing, as you are to enter a game where you will spend the entire round being killed from half a kilometer away, by someone on an 89-kill streak, who is single-handedly defending all three capture points from your entire team.

Even with the matchmaking still not being functional, however, the bigger problem is the game’s learning curve and its complete absence of any sort of worthwhile training method. Now, I am by no means an RTS savant, but I am at least decent enough that I have been able to complete several campaigns across Blizzard’s RTS games, the Total Annihilation games, and the Halo Wars games, so I am not a complete novice, either. One of the many things Blizzard always did especially well in WarCraft and StarCraft was slowly introducing players to technology trees and units, and which scenarios to use them in, in manageable chunks. This gave you time to learn strategies and approaches that you just would not have learned if they had dumped an entire arsenal into your lap right from the get-go against an opponent that knew exactly what to do with that arsenal. This is exactly what Eximius does. While still clicking around to try to figure out which structures should be built first, or which units you should train, or which structures you even need in order to train the advanced units, your AI opponent has already started the exact production path it needs to spawn the units it wants to deploy for the scenario it anticipates.

Meanwhile, if you have a team of AI officers, they will immediately sprint off towards a capture point without any backup, die, and repeat this process indefinitely while you desperately try to assign a squad to them as they leave the base to go die again. In fact, the AI is so bizarrely extreme in its brilliance or stupidity it baffled me. One game where the AI beat the tar out of me and dropped me down to only four out of 500 points with 380 of its points remaining, I ended up winning, simply because I moved single tanks onto the streets right next to each capture point. For whatever reason, despite decimating every special unit and squad I sent out for ten minutes straight before that, suddenly the enemy just could not comprehend how to attack these lone tanks.

While the game does have a tutorial, the tutorial only covers the most basic movement and shooting for the first-person gameplay only, and the tutorial challenges similarly only teach you first-person gameplay mechanics. The “training” available to you as a commander is limited to a handful of videos which explain only the basics of clicking a unit to select it and move it to attack or capture a point and go into no depth regarding the technology tree or the strengths and weaknesses of the units. There is an “Intel” section in the game that explains information about each unit, and while that is interesting and fun to have as an extra, it is functionally useless for gameplay.

There are also features conspicuous by their absence, such as the ability to group mixed units together. Some units, including every vehicle, can only be individually selected and given orders one at a time, and cannot be assigned to officers. It makes using any of these units extremely tedious. There is no campaign or story at all either, something in stark contrast to its opening cinematic. Besides the absence of a campaign eliminating a reliable, controlled way of teaching the player how to play, it also eliminates any potential customers interested in the game but who do not have an interest in multiplayer only, or offline multiplayer matches against a schizophrenic AI. Despite this and its multiplayer focus, Eximius went to market with only five maps, and every game mode takes place on one of those five maps. Since launch, it has averaged 45 concurrent players. With such a niche target audience, how much will this multiplayer-only community really grow?

Yes, Eximius is very ambitious, but it is unfinished and should still be in early access instead of selling $5 DLC packs. It needs a campaign, a clear explanation of its technology trees, and comprehensible AI for both teams. Eventually, this game might be something, but as it is right now, I can only advise you to watch and wait.