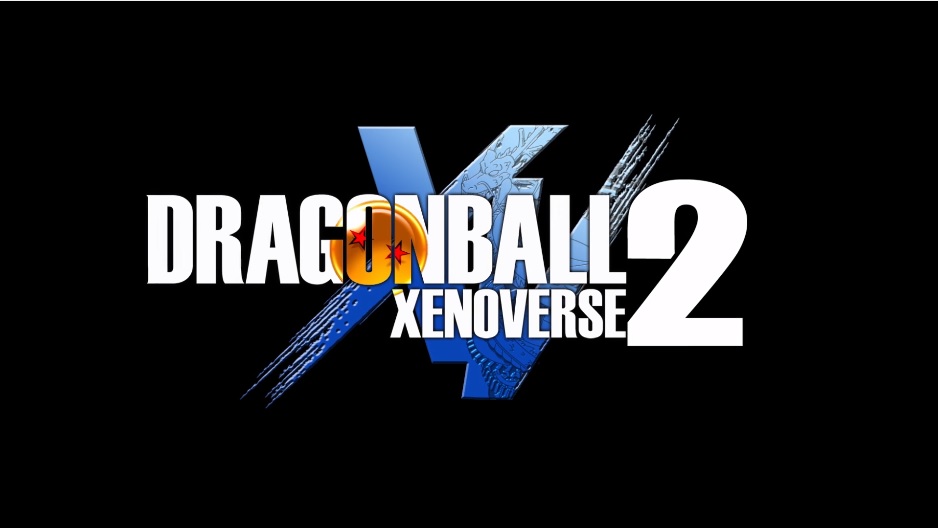 Having only been a fan for just over a year now, I can’t say that I’m the hardest hardcore Dragon Ball fan to ever live. Not to say that my fandom is half-baked. I jumped in with two feet and a few flips, like Goku getting ready to face-off against Radditz…and then die (spoiler alert). Nine seasons of Dragon Ball Z, fifteen Z movies, what’s available of Kai in English (I’m sorry, I just prefer Sean Schemmel to a Japanese grandmother, sue me), and as much of GT as I’ve been able to stand later, and I feel I am more than qualified to review a Dragon Ball game based primarily on Z.

It was more coincidence than timing that found me playing through Xenoverse 1 prior to the release of Xenoverse 2. Having watched the entire Z series and the films, I found myself wanting to dive more into the universe of Dragon Ball and felt that Xenoverse 1 was a great way to do that. Not only did it let you participate in iconic moments from the series, but it let you explore the incredibly fun Dragon Ball multiverse with a hero of your own creation. I invested weeks in the original game, and by the time I got the call to review 2, I had what I would consider an extremely good understanding of every aspect of what its predecessor had to offer. Not only that, but this let me carry aspects of my progress into Xenoverse 2, a feature of which too few games take advantage. 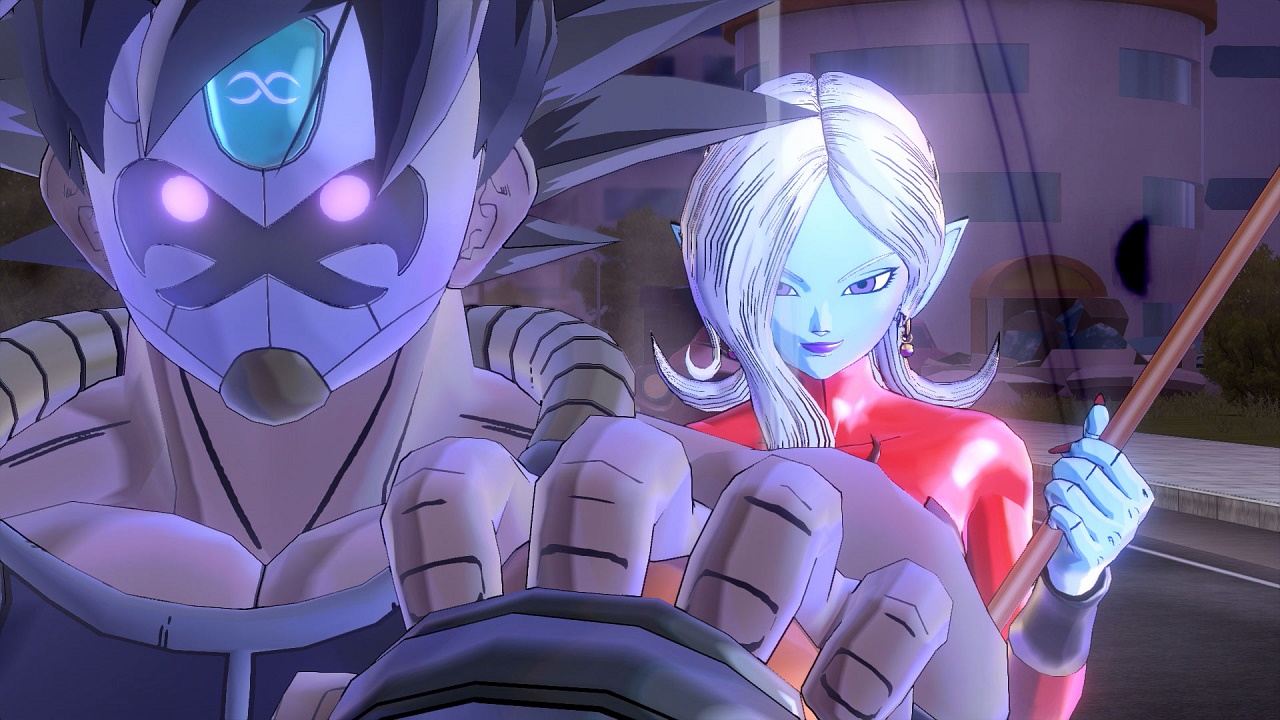 This brings me to a bit of an odd spot, though. You see, Xenoverse 1 and Xenoverse 2 – as far as storylines are concerned – are two totally different, separate games. In fact, if you import your hero from the first game into the second, she even appears as an NPC working alongside you and Trunks from time to time to stop some bad guys from the first game who haven’t quite gotten the message to go away yet. In that regard, if you’re a DBZ fan who somehow hasn’t played these games yet, I can’t really say that you should just ignore the first game and go right to the sequel.

However…mechanically, you should absolutely skip the first game and go right to the sequel.

Functionally, Xenoverse 2 is much the same as Xenoverse 1, just better and with more of everything. For the uninitiated, Xenoverse is an action RPG where you create your own character from one of the five available series mainstay races – earthlings, saiyans, namekians, majin, or…Frieza’s race, which is literally called “Frieza’s race.” You choose your equipment, your special techniques, and as you level up, your stat bonuses, increasing your health, stamina, ki, attacks, or super attacks as you see fit. Gameplay is largely divided into two parts, exploring the city hub and fighting. While in the hub, you can shop, talk to NPCs, train with characters from the DBZ series, and customize your character, and you can play solo or join a multiplayer lobby if you want to see other players roaming around doing various tasks like you are. 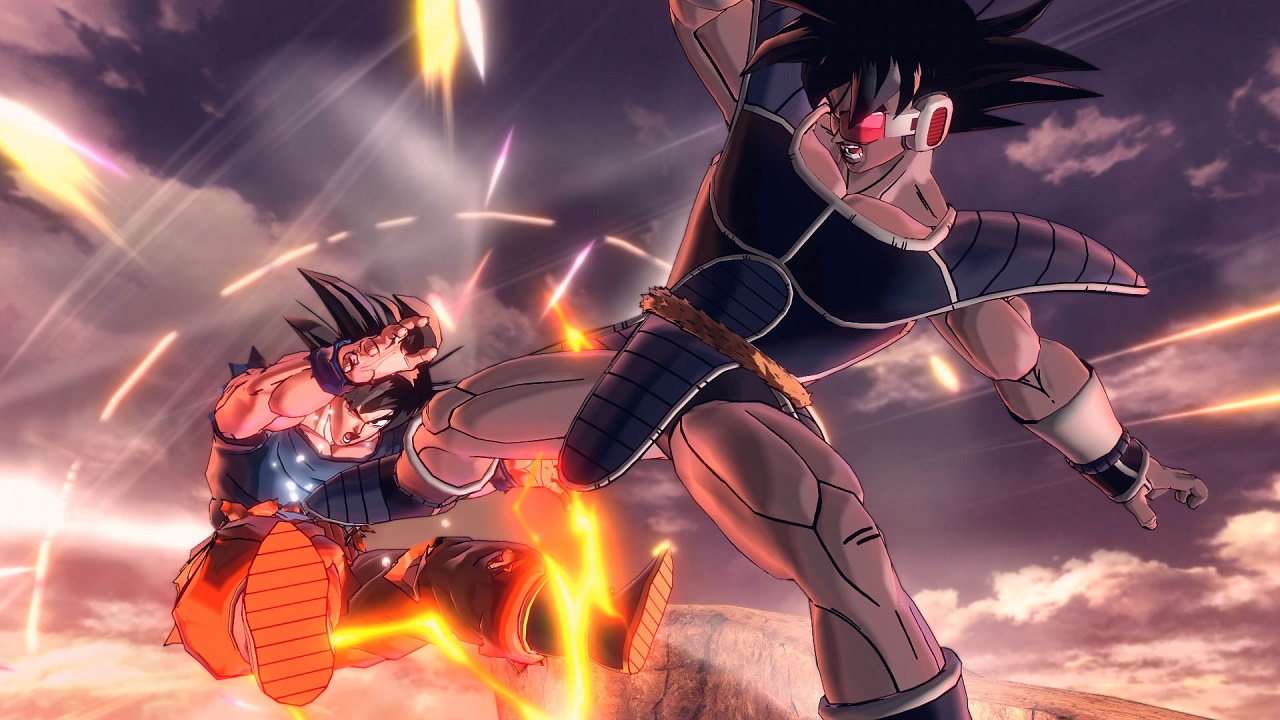 Once you select a story mission, you are transported into battle. For side quests, you can usually select your party first and fight alongside two of your favorite fighters from a huge roster of characters. The side quests are the bulk of the content, providing lots of fun “What if?” scenarios for you to experience, like Nappa deciding to overthrow Vegeta and become the King of All Saiyans.

Battles take place on a fully 3D field with flight playing a large factor, so just like in the series, you can expect your skirmishes to involve kamehamehas and kikohos from every direction. Basic attack strength and health are pretty self-explanatory, but stamina ties into your ability to block and evade, and ki ties into your ability to use super moves and ultimate moves. As you increase your ki and stamina stats, you earn “bars” of each, and in general it takes one bar of ki to perform a super (like a Galick Gun) and three bars of ki to perform an ultimate (like Final Flash). One bar of stamina can be used to push an attack when you get (or want to get) an edge on your opponent, while two bars will allow you to dodge when you’re trapped in a combo and three bars will allow you to use a special super evasion that can be anything from a ki deflecting shield to a hyper fast counter attack. Throw in dashes, ranged ki blasts, and guard breaks, and you actually end up with a pretty fun combat system that is easy to pick up and enjoy while still allowing a degree of growth and mastery beyond smashing light attack over and over again. 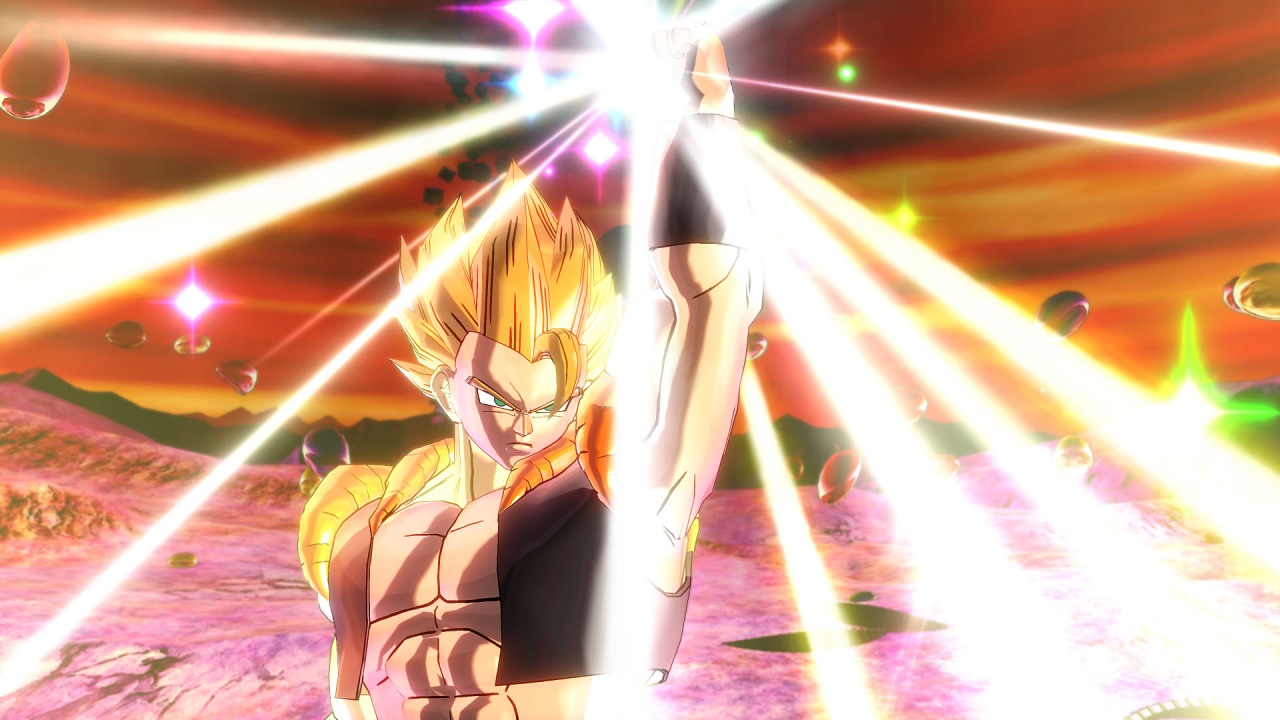 Now, these are all true of both Xenoverse 1 and Xenoverse 2, but what sets Xenoverse 2 apart is the vast increase in its scope and scale. Instead of walking through three tiny city districts, you now have about a dozen to explore with no loading screens in between. Instead of walking, you can travel on a capsule vehicle and – eventually – even fly just like you can in combat. There are more trainers, more quests, more skills, more equipment, more characters to play with, more challenges, more combos, and really just more of everything. It all feels more polished, too. While not much has changed for the core visual style of the game (which is obviously true to the series), the animation quality for the user interface is much more slick and stylish. There’s much better instruction as well. The training and tutorial system has seen a complete overhaul, and the game now does a fantastic job of instructing you on things that poor veterans of Xenoverse 1 had to learn the hard way. Multi-attacker battles are still a bit tricky, but it feels like you have a few more options at your disposal to give yourself a fighting chance even when you’re overwhelmed now, also. 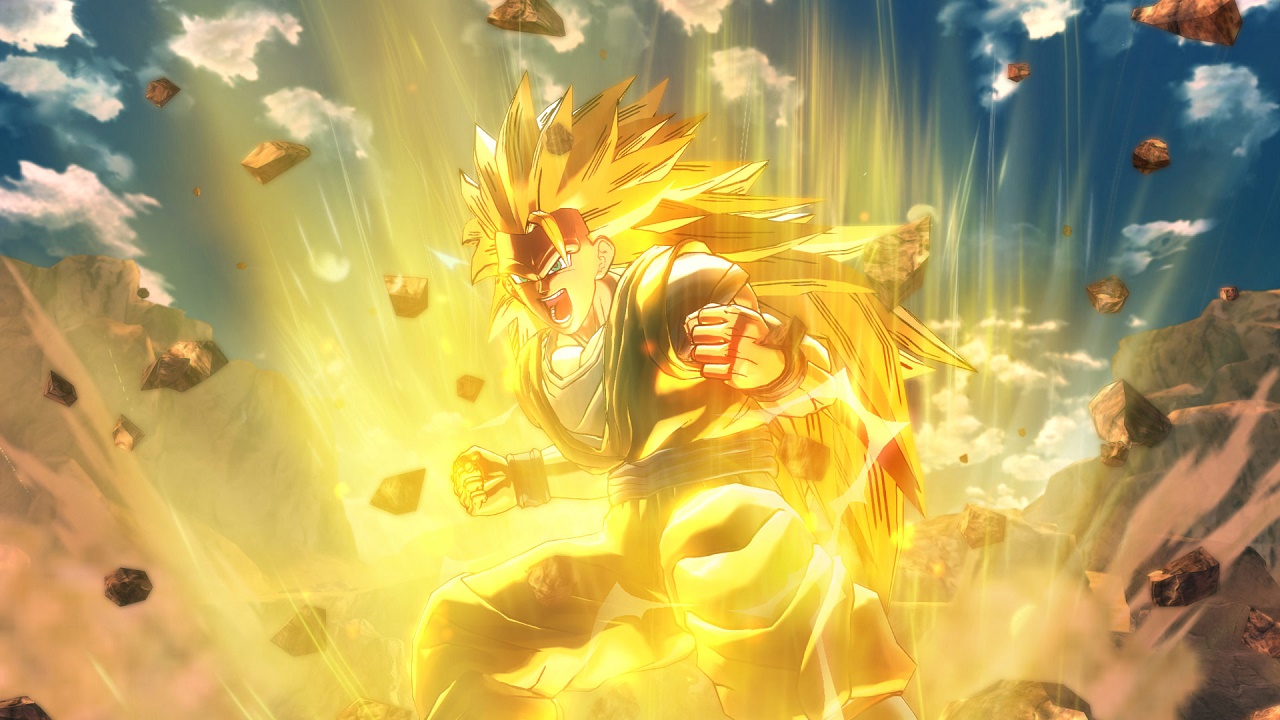 There’s also been a huge improvement to incentivizing players to try each race. It should come as no surprise that one of the most tantalizing things you could do in Xenoverse 1 was play as a saiyan and take on the iconic super saiyan form like the series’ protagonists. Poor earthlings, namekians, majin, and…uhm…Friezans?…were left out in the cold, but no longer. In Xenoverse 2, each race now has an “awoken” form they can enjoy, and they’re all pretty awesome, too, letting you feel like your character has achieved this amazing leap in power. While the majin are somewhat shafted in this regard, they’re still better off than they were in Xenoverse 1.

Another enormous improvement is the drop rate for skills earned in side quests, called parallel quests in the game. To elaborate a bit, in Xenoverse 1 and 2 both, skills can be earned from trainers teaching you the skill, earning the skill in a quest (which is “dropped” by the person who has the skill, with an opportunity for specific skills only available in certain quests), or buying the skill from the skill shop. Trainer skills are exclusive to the trainers, but every skill sold in the skill shop can be earned from quests…while not all quest skills are available in the skill shop. This means that in Xenoverse 1, if you really wanted Super Saiyan (the skill allowing the transformation) and didn’t want to grind for it, you could wait and purchase it in the shop. However, if you wanted, say Kaioken x20, you better get used to repeating the side quest that can drop it and pray for good luck, because the random number generator that decides whether you got the skill or not was a merciless task master who demanded equal parts repetition and devotion. 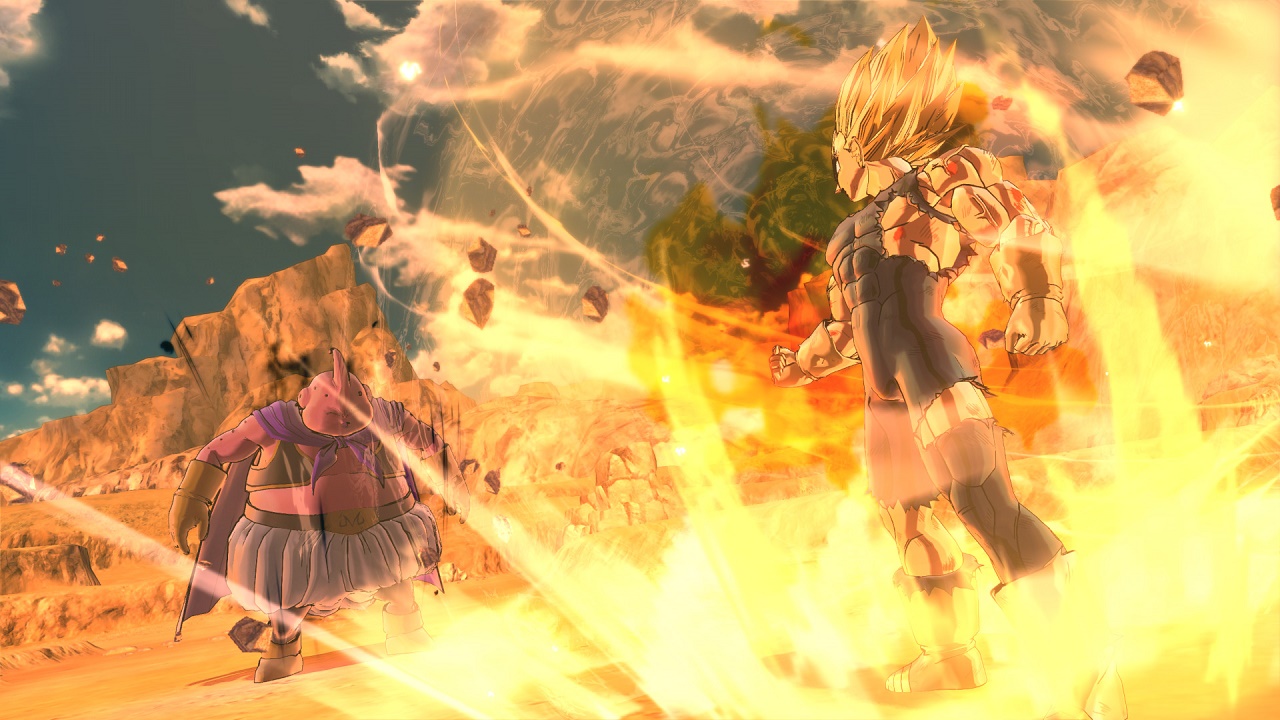 While the skill drops in Xenoverse 2 are still random, they are much, much, much more generous now and you usually won’t have to repeat a quest dozens of times for a skill to drop. This is a life saver for those who want to customize their characters with a particular skill set, or just those who want to have everything collected that’s collectible.

The only area where Xenoverse 2 doesn’t add much to the game is in multiplayer. There’s still the multiplayer hub, online battles for up to six players (in a three on three), and co-op quests, but that’s pretty much it. Not that it’s a complaint, just a surprise since so much of the game was beefed up. To be fair, though, I’m hard pressed to think of what else could reasonably be added. The transferal from Xenoverse 1 also isn’t anything spectacular. By importing your character from the first game, you gain his equipped outfit, super attacks, and ultimate attacks, along with a fraction of his money transferred into both zeni, the same currency as before and a series staple, and TP Medals, a new currency that can be used for a number of things, including a special weekend shop similar to Xur’s weekend appearances in Destiny. If you played the first game, you’ll be re-earning a lot of skills you had before, but on the plus side your old character gets a statue in his or her honor and gets to tag team with Trunks, so there’s that. 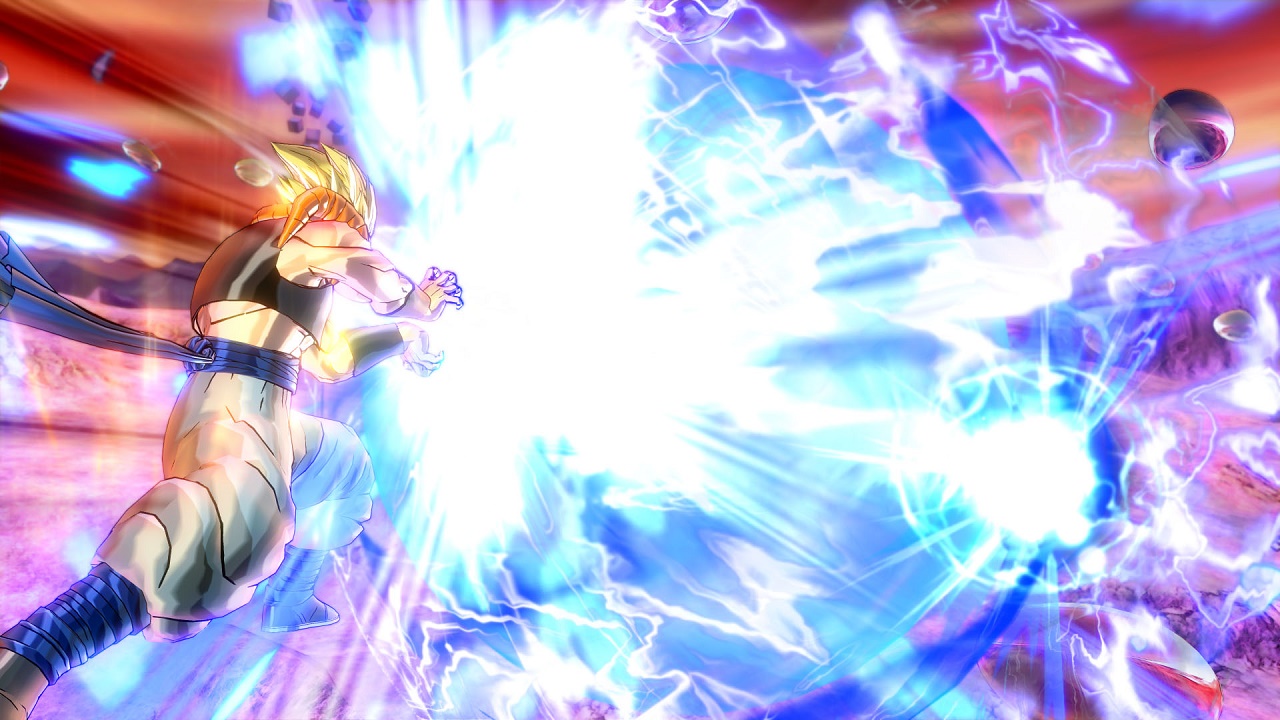 I can’t really stress enough how much fun I’m still having playing Xenoverse 2, strengthening my characters, trying to earn the best ratings I can on quests, and trying to unlock all of the skills I want to try out in battle. With all that being said though, scoring this game is a bit of a headache. If I’m to score it based strictly on this game as it is, standalone, then I want to give it a 9 because of all of the content that’s on offer, along with ongoing season pass support for those interested (as that’s apparently just a thing that we can expect from every game going forward). However, as the number at the end indicates, Xenoverse 2 is a sequel, and it’s impossible to ignore that much of this game is not just similar, but exactly the same down to the quests and their criteria for completion. There are a few changes here and there, but there still isn’t much truly new content to be found, just improved content. That makes me lean closer to giving the game a 7.

As I’ve said, I’ve had a tremendous amount of fun playing the game, and I think anyone who loves Dragon Ball will. Like me, fellow fans will probably love every second of Xenoverse 2, even with the overwhelming similarity between it and its predecessor. In the end, the only fair score I feel I can give is an 8, resting right between that 7 and 9 I mentioned earlier. Hopefully with all of the information available in this review, you’ll be able to decide if and when this is a buy for you as a fan of Dragon Ball and/or as someone who played Xenoverse 1. Until then, I’m going to get back to parallel quest nine and see if I can finally get Nappa to drop Meteor Blow for me, and wait to see if this game is even Xenoverse’s final form.