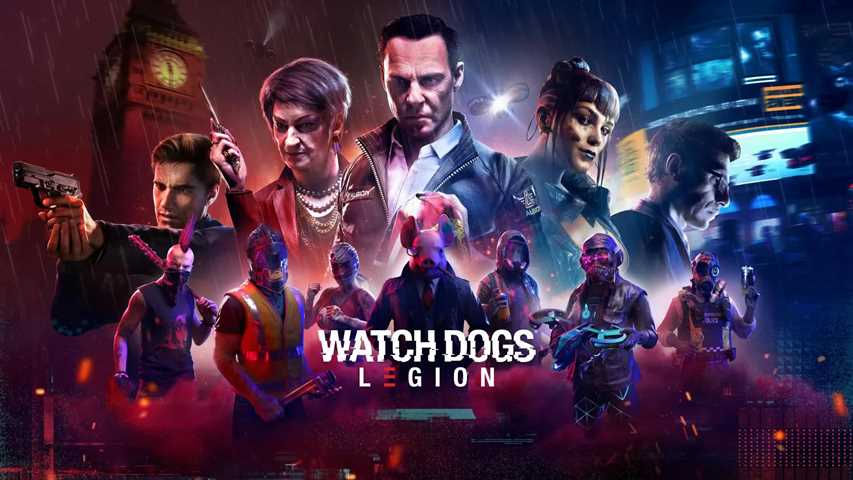 Almost four years ago, Ubisoft offered Watch Dogs 2 for fans of the series, set in San Francisco and offering an open-world action experience. Cue 2020 and the setting has changed to London, with the actions remaining firmly on familiar ground. Is there reason enough then to dive-in to Watch Dogs Legion? Take a look at our Watch Dogs Legion review for the full picture.

Today we’re taking a look at Ubisoft’s open-world action game Watch Dogs Legion, which comes almost four years after its predecessor. The game crosses the pond this time, and favours the watery London in the UK over the sunny climes of San Francisco. It’s a massive change considering the original game set itself in Chicago. Perhaps then, the change of scenery is a good thing, as London’s European vibes feel quite different from the American offerings of the past.

The story revolves around an amalgamation of layers resting on hacker group DedSec versus government employed PMC force Albion, a rogue underworld gangster, clan Kelley headed by Mary Kelley and anti-terrorist forces Signals Intelligence Response or SIRS. From the start of the game, DedSec becomes dismantled after being blamed for a major terrorist attack on London. Your job in a nutshell, is to rise from the ashes, bring DedSec back online and uncover the truth behind your fall from obscurity. The story, whilst always going to be quite predictable how it pans out in the end, is engaging and entertaining, with its larger than life characters. It’s certainly well thought-out as a means to driving players forwards, especially in a game where it’s quite easy to get lost in all the kerfuffle and forget what it is you’re supposed to be doing.

Everything works as it should which is great and totally helpful. A quick look at London’s map, highlights main-missions, who’s who, side-missions and fast-travel tube stations (that’s the London Underground network). You can also check all-manner of documents and information. All good then. The gameplay itself feels standard-fare for an open-world, third person action game, featuring the usual tropes. You can run around at will, hijack vehicles, get into fisticuffs with pedestrians or bring out the guns and cause mayhem. The combat offers pretty decent non-lethal or deadly approaches, alongside player choice of stealth or action-based play, both of which feel pretty polished despite some less-than-stellar opposition AI. You can idly watch the world go by if desired, or become involved and infiltrate restricted zones. For the record, aside from motorcycles (which handle very well), the driving seems a touch on the floaty side and a little too responsive, with no real inertia when easing off the gas. Driving is very much arcade like and a means to get from A to B. No midnight club street racing here which is a shame and a missed opportunity.

What the Watch Dogs series does well though, is its hacking, and here is no exception. At any time players can hack drones and pilot them for a closer look at things. Hack the CTOS camera network and gain valuable insights into the opposition without needing direct contact. It’s all pretty good, but hasn’t advanced much from the previous games. However, some new tools present themselves to players including the six legged spiderbot, which enables you to sneak into controlled zones and hack away or take care of patrolling guards. It’s a neat inclusion that makes sense with keeping your character out of harms way. There are actually some really cool missions with the spiderbots and drones throughout the game which adds some much needed variety in the absence of few side-activities in the grand scheme. That’s one complaint where the game seemingly falters quite hard. There’s an underlying sense that whilst mostly accomplished in what it offers, it could do so much more with the sandbox.

Watch Dogs Legion’s touted feature and unique selling point though is the player action of rebuilding London’s DedSec hacker base, by way of recruiting new members. It’s a fun metagame that can also serve as a massive distraction from the task at hand. At the start of the game (post-prologue) you choose from a selection of random characters (based on ordinary Londoners) and then head out into the wilds. A shame you can’t create a character from scratch, but at least you can change their clothing from the off. With your hacking phone you can highlight any pedestrian, worker or security person, and glean information about them. Whilst that’s nothing new for the series, this time you can actually recruit them into DedSec. Every character, including your enemies has a back-story and a set of skills which could prove useful to your cause, the only snag being you have to perform set actions to convince them to come on-board. Naturally, some require more effort than others, especially if they have a disliking for DedSec. What’s clever is how each character has a relationship with DedSec ranging from positive, neutral, disliked or hated. So for example, you might have accidentally hospitalized, or worse killed a particular person and then try to recruit a friend, acquaintance or family member of theirs . It’s going to be harder or impossible to do so depending on the severity of their relationship with Dedsec. If you manage to interact with an appealing character, then this usually involves an infiltration mission of sorts to gather Intel, and then another mission to resolve the problem the person has. It’s an novel mechanic and works very well in context of the sandbox.

There’s perhaps two ways to approach recruiting new members. You either tag people you see that look interesting from a visual point of view, but they might not possess any meaningful skills, or tag people that offer skillsets that prove useful in certain situations. For example, a brawler type character will be good in fisticuffs should your infiltration into restricted zones screw-up. Or a spy character’s weapons proficiency might prove handy if you’re gunning down tough opposition. Hacking experts might make your snooping a lot easier. You get the point. That said, whilst this is a cool feature it’s also the game’s biggest let-down.

It’s pretty easy to ignore the fact there’s no identifiable “main character” here to gel with as a player. DedSec and its supporting cast itself fulfils that role. You can get over that quickly once you’ve spent time with your team. However, the team becomes somewhat dispensable and easily replaced, especially as there is no progression system for individual characters. Instead, the game employs upgrades for the entire team via collecting tech points which you spend on new skills. The game offers a permadeath option (which we highly recommend you play it this way from the off) which means if an operative dies they are gone for good. Problem is, regardless of their skillset, it’s not too-hard to find a replacement. The other problem is, it’s quite possible to play the game with characters that possess no skills, making the whole process of hunting down those with extra skills somewhat redundant. A far better system would have employed individual skill progression, giving players a greater sense of investment and loss should they fall along the wayside. As already mentioned, there’s a lack of side-activities to suit the skills of the people you recruit. You might find a get-away driver, but with no racing events means their skills are wasted. Same for professional hitmen and women. It would have been great to have specific missions for these characters. It seems, Watch Dogs Legion has this wonderful recruiting system but then doesn’t fully exploit the potential of it.

Gameplay aside, visually Watch Dogs Legion looks fantastic on PC, what with real time reflections when using ray tracing options and high resolution alongside optional HD textures. This is certainly a glimpse into next-gen visuals and does a grand job of making open-world city based games look more realistic. London looks faithfully recreated with its unique post-modern and classic architecture fused with a neon-soaked fantasy vision of the near future, making it a joy to play around in (especially during rainy moments). Character models looks great and animate well too with a nice variation of models, although after extensive play you will start to see clones in different clothing. Unfortunately, the pretty visuals come with quite a high GPU cost to get it looking at its best where even the most powerful consumer GPU the RTX 3090 struggles to maintain high frame rates running at max settings and 4K even 1440p. Thankfully, Nvidia’s DLSS helps considerably to bring the cost down, but even then when driving or walking around London’s streets the frames dip considerably. Some improved optimization could be used here to improve things.

Audio comes in as a mixed bag here, and will no doubt be subjective. Some voice over accents are comical at best, whereas others simply don’t fit the game or are too stereotypical or fantastical to command any merit. Whilst the dialogue feels strained at times, there are moments when you’ll either scratch you head bemused or laugh-out-loud. It’s good there is variety, but sadly some voices might grate and ruin what could be a decent character to have on the team.

In terms of longevity, the side-missions when recruiting new DedSec members follow the same pattern after a while, but there’s quite a bit of variation. The main missions also offer some neat moments, especially when taking over one of the boroughs. So there’s enough here to keep you entertained for 20+ hours or much more including the main story arcs. We’re on hour 40 and not quite done yet building our dream-team of femme fatales. However as mentioned, there is a lack of things to do in London which could have expanded the sandbox gameplay more with additional activities to partake in. In this regard London feels a bit empty.

Watch Dogs Legion then is a fun game and one that should keep you hooked for many hours. That’s despite a lack of true inventiveness with its unique recruitment system. With a little more tweaking to the formula, there’s potential for some really amazing stuff. As of now though, it’s a sneak peek into the future and whilst it’s fun and distracting at the same time, it does let the game down despite being its USP. The game does feature its fair share of performance issues on PC alongside a lack of things to do in London, despite being a real looker. If you can handle the lack of one lead character and enjoy the Dedsec movement, you’ll have an entertaining romp into the darker, yet colourful side of London’s underbelly. Cor Blimey!