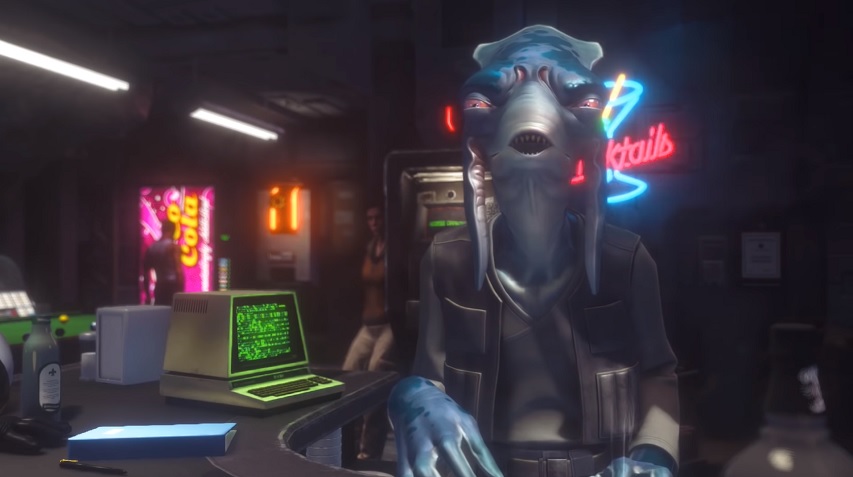 When I first started playing Double Damages’ prequel to Rebel Galaxy I was a little perplexed with the initial choices. Right from the beginning a pool table for a fully fledged game of pool presented itself. Slot machine to while away the minutes, and a dice based poker game. Not only that, I could talk to the bartender for some information and advice. Rebel Galaxy Outlaw doesn’t hold back then , and rather than wait until several hours of gameplay passing, the options laid-bare are ripe for the taking. All good then right?

After so many hours play I can’t help but feel a more structured opening might have fared better for my tastes. I kind of feel like I’ve seen and done most of what the game offers with hours left to play. Let’s rewind a little though first.

In Rebel Galaxy Outlaw you play the female character and general hard nut Juno Markev, an ambiguous and perhaps androgynous looking character if there ever was one. Getting into debt and chasing after a deranged nutter is the order of opening proceedings. Once the opening pleasantries pass it’s grab a low-level ship and become the gun-for-hire type character. Actually it’s not just shooting and looting I was able to path an early career as a courier – such is standard in these space sim type games. But ultimately whatever you do shooting down other ships or talking your way out of trouble is unavoidable.

With enough cash I was able to spend my earnings on ship upgrades so I could fare better in combat situations or defend myself with a greater effectiveness. Whilst not plentiful, I had a nice choice of parts to add to my ship, and that’s before gaining enough cash to buy a new one from the assortment of craft on offer.

Here’s the thing that got me though once you reach a certain point in the story. Rebel Galaxy Outlaw follows a pretty basic gameplay loop. Take on combat or courier jobs at the outpost (or follow the campaign), head into space and jump across the galaxy to reach your destination. Each jump you’ll get interrupted from pirates or a distress beacon. The former resulting in forced combat unless you talk your way out of it. I found the beacons a royal pain in the arse because I just wanted to reach my destination. Perhaps there was an option to not stop each time in the menu, but I didn’t look for it. The point here is these stoppages offer some bonus rewards depending on what the distress is. So why complain about them? Well as I said it happens each jump pretty much and just gets annoying. Call me a bitch but I mostly ignored the poor blighters. Oops sorry guys!

Combat is a large focus of the game which I enjoyed immensely. There’s an easy lock-on function for ease of play and depending on your load-out, kicking serious tail (not without consequences) is fairly easy. Sometimes I got outclassed though which put me back at the last save-point automatically from the main menu upon death. I thought that was pretty forgiving seeing as the game saved quite frequently. A tougher game awaits those brave enough to try a harder less forgiving difficulty though.

I tried my hand at being a peaceful merchant and general do-gooder as well which netted various results. On one hand the constant scanning of my ship from the police slowed things down, but on the other I avoided combat with them. On the flip-side my reasonable behaviour with the law meant the pirate factions attacked at every opportunity. It’s really hard to avoid combat in this game by way of design it seems. I guess this is the point and just making jump after jump to deliver goods etc. would get old if nothing happened in-between.

Moving away from the gameplay for a moment. The audio and visuals impressed me greatly. Alternate ship views, the option to paint your ships with a really in-depth editor, cool docking scenes (which you can skip thank God) and great ship interiors . Juno comes across as you would expect with a decent voice actress. Her counterparts in radio chatter and story based characters do a decent job too. It’s a wild west style approach so take that as you will with the accents. I have to mention the music though. There’s a lot here across various stations to tune in to. I can’t even comprehend the amount here. At least I wasn’t’ bored with the varied audio as I conquered the shipping routes even if most of it was alien to me.

To wrap-up this review. Rebel Galaxy Outlaw is a solid game but does get repetitive quite quickly. It features some likeable characters and great combat but in my opinion puts all its cards on the table a little too readily early-on. I enjoyed the game but can see others struggle once they get passed the first hours or so. I think in its defence though, it’s a pick-up-and-play game which you can dip in and out of at will without losing too much. I am going to assume fans of the Rebel Galaxy will love this prequel and the new cockpit system it introduces. Elite players might find it too simplistic though because for me it wasn’t as much a sim, rather an arcade type game.

For the low-price Double Damage ask for, this I have to recommend for anyone who likes space shooters. The galaxy offers plentiful work and an endless number of AI opponents to test you skills against. A cool game then perhaps lacking overall depth but well worth the ride. And the music, holy shit!