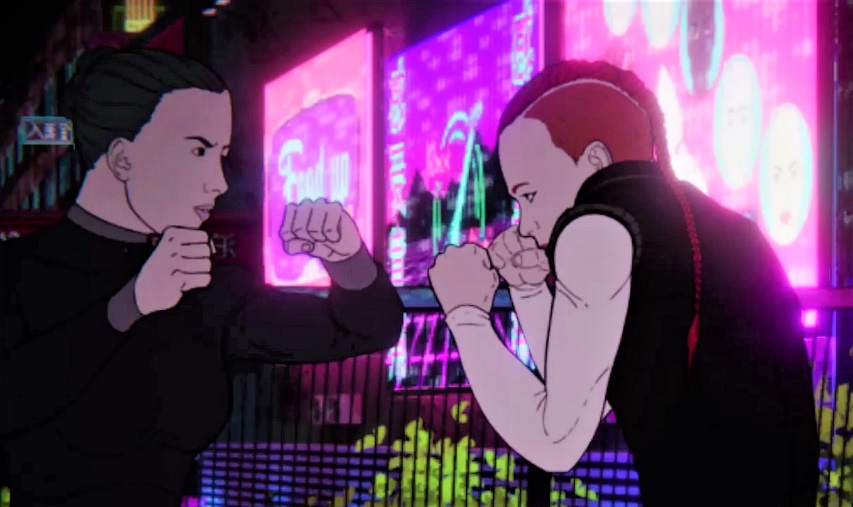 Today we’re taking a look at the rather cool cyberpunk themed adventure game Evolutis. This is the first game from Portuguese developer Poke Life Studios and aims to release this year on consoles and PC under the wings of publisher PM Studios. Poke Life Studios developed Evolutis in Unity and features some incredibly vibrant hand-drawn visual elements as you can see. Think Akira, Ghost in the Shell with a touch of the 80s as inspiration here.

So what is the game about? Evolutis takes place within the confines of Fenghai, a bustling Neon-Noir city set within the future. Players assume the roles of three characters which include, Damon Reed, Chelsea Williams and Derick Warren. Each character has their own agenda and as you play, their stories will intertwine with each other.

Derick Warren’s story sees him as a drug addict searching for the person who killed his cousin. Whereas Chelsea’s story is vastly different as she is a well-known wrestler trying to keep her non-biological father alive. We’re assuming here her fight payments afford to pay for his treatment. Finally, Damon Reed (the person you see in the demo) a tough-as-nails chap looking for his dead wife who apparent was pregnant. So that’s three very different motivations for the playable characters with you at the centre to uncover the mysteries surrounding them.

So what of the gameplay? To be clear, this isn’t a game where you just walk and talk like a point-and-click adventure, it’s much more involving than that from what we’ve seen. Players need to complete set objectives before they can progress to the next area. However, within these areas side-objectives present themselves where the player has a direct connection and can influence the outcome depending on how they play. It’s not clear how your interactions with NPCs affect the overall story but given the options available we’re going to assume you won’t get the info you require if you act like a jerk.

Aside from the navigation, talking to NPCs, gaining leads and moving across different zones, players engage in hand-to-hand or weapons based combat. These moments aren’t QTE but full-on real-time fighting complete with combo attacks and finishers. The hand-drawn animations really shine here and look spectacular. Interesting to note the different styles for each character as you would expect, with Chelsea’s wrestling background factoring in with her moves. During the demo, we see hand-to-hand, an axe and pistol used to take out the opposition. How prevalent these action sequences are we don’t know yet, but given the dark themes surrounding each character we suspect there will be ample opportunity to dish out some punishment.

During the demo which features the Damon Reed character in action, we see him ride a motorbike driving the wrong way along the freeway. An explanation for this madness will reveal during the story. It’s not only a quick way to visit the main zones, it’s also a mini-game of sorts where players avoid oncoming traffic. It’s an interesting cinematic viewpoint to use here and hopefully not too hard to complete.

Whilst we’re on the subject of cinematics and visuals, the game just oozes atmosphere and captures the neon-soaked cyberpunk theme perfectly. Lots of neat touches such as scanning the homeless guy’s arm to pay him. Animated back-grounds sweeten the deal and the overall ambience is quality. We’re told the game will have a fully voiced cast of characters which sadly is absent in the demo.

Evolutis has peaked our interested immensely. With limited game specific details at this time, expect more info closer to launch. If you’re a fan of Cyberpunk themed games with a touch of anime tossed-in then this is well worth keeping on your radar. If you like a bit of mystery and intrigue then be sure to keep an eye on it. In the meantime, take a look at the full demo play-through although be warned, none of it is final and is subject to change. There will be improvements especially in terms of voice-overs for the characters. We’re going to be covering Evolutis more in the near future, so stay tuned.