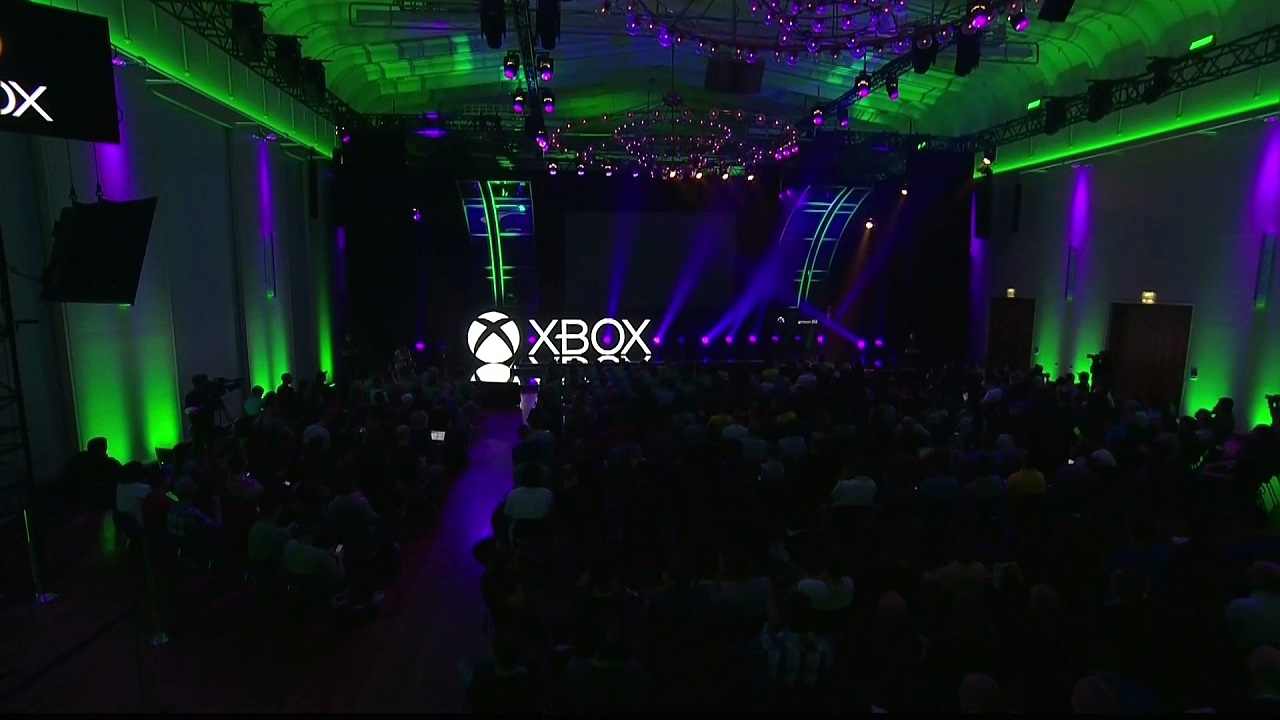 For those who missed the live stream which can still be viewed on Xbox 360/One or in the video below, here’s a quick overview of Xbox Gamescom 2015 announcements and what was presented and discussed by Team Xbox making the future very bright for Xbox One gamers.

Today saw the launch of “Rare Replay” which kicks off the 2015 Xbox games line-up, which was the most awarded line-up in Xbox history at E3 2015. Today at gamescom, the company revealed more 2015 games news and gave fans an in-depth look at the blockbuster games available this year:

· 343 Industries signaled the return of Halo eSports with the Halo World Championship, kicking off this Autumn with the biggest investment in Halo eSports history — a $1 million prize pool.

· Crystal Dynamics gave fans their first look at one of the expansive hubs gamers will be able to explore in the highly anticipated “Rise of the Tomb Raider,” before showing off Lara’s new guerilla combat skills and the awe-inspiring Prophets Tomb, filled with secrets to be discovered when the game releases this November, exclusively on Xbox. A pre-order only Limited Edition Apex Predator Pack, available exclusively at GAME UK, comes complete with a Special Edition Rise of the Tomb Raider Steelbook, as well as the exclusive “Apex Predator Skin”, “Python Hand Cannon”, and “Holy Fire Card Pack” digital content, priced at £59.99 ERP.

· Electronic Arts shared a look at “FIFA 16,” detailing the full roster and new features coming to FIFA Ultimate Team Legends, and reminded fans that EA Access members3 will get exclusive early access to the game beginning 17th September, only on Xbox One.

· Gamers who purchase Square Enix and Avalanche Studios’ upcoming open-world action adventure “Just Cause 3” on Xbox One will exclusively receive “Just Cause 2. 4”

· Ubisoft provided a look at the German CTU featured in its upcoming multiplayer shooter “Tom Clancy’s Rainbow Six Siege.” Gamers who purchase the game on Xbox One will exclusively receive both “Rainbow Six Vegas” and “Rainbow Six Vegas 2. 4”

· ID@Xbox showed several innovative titles at gamescom, including “Worms WMD,” “Thimbleweed Park,” “Train Simulator,” “Ark : Survival Evolved,” “Sheltered,” “We Happy Few,” “Bloodstained” and more than 30 independent games coming to Windows 10. Fans have a lot more to look forward to, as more than 150 new ID@Xbox titles are coming in the next 12 months.

· Mojang announced that since the launch of “Minecraft: Windows 10 Edition” beta less than a week ago, players have travelled more than 826 million metres in-game; the equivalent of circling the earth 20 times.

· Since the announcement of Xbox One Backward Compatibility at E3 2015, fans have cast over three million total votes on Xbox Feedback for the Xbox 360 titles they’d like to play on Xbox One.

· Xbox One preview members have logged more than 83 years playing Xbox 360 backward-compatible titles on Xbox One.

· “Gears of War” and “Shadow Complex” are the newest titles playable on Xbox One today through Backward Compatibility.

· Xbox One will be the only next-generation console to offer backward compatibility for free this November. With more than 100 Xbox 360 titles and hundreds more to follow.

· All future Xbox 360 Games with Gold titles will be playable on Xbox One, meaning Xbox Live Gold members will have more free games to play each month on Xbox One.

Building on the greatest games line-up in Xbox history announced at E3 2015, including games like “ReCore,” “Sea of Thieves” and “Gears of War 4,” Microsoft revealed additional details on the exciting line-up of titles coming to Xbox One and Windows 10 in 2016:

· “Crackdown 3” (XBOX ONE EXCLUSIVE). Stop crime as a super-powered agent of justice in this hyper-powered sandbox of mayhem and destruction. Developed by original creator Dave Jones, “Crackdown 3” delivers cooperative mayhem and an all-new multiplayer mode2 where destruction is your ultimate weapon, powered by the Microsoft Cloud. Multiplayer beta beginning in 2016.

· “Dark Souls III.” Known for delivering a high level of unrelenting challenge to gamers, the next chapter of the “Dark Souls” saga returns with “Dark Souls III.” Developer FromSoftware returns to create a new blighted world for players to explore. The embers of a once-proud kingdom set the stage for this new adventure. Players will battle against fearsome enemies and bosses with a variety of weapons and magic through a mysterious land riddled with secrets.

· “Halo Wars 2” (XBOX ONE AND WINDOWS 10 EXCLUSIVE). An exciting new strategy game packed with fast-paced action, massive battles and an all-new Halo story, “Halo Wars 2” is coming to Xbox One and Windows 10 in Autumn 2016. Developed by Creative Assembly, a SEGA company and the creators of the popular “Total War” series, in partnership with 343 Industries, “Halo Wars 2” is the sequel to the game that redefined real-time strategy on consoles.

· “Quantum Break” (XBOX ONE EXCLUSIVE). From the makers of “Max Payne” and “Alan Wake,” Remedy Entertainment showcased new gameplay and footage of “Quantum Break,” the studio’s latest blockbuster game with time-amplified action and a suspenseful storyline brought to life in a way never done before in the gaming world. “Quantum Break” will be available on 5th April, 2016.

DVR for Over-the-Air TV Coming to Xbox One

With DVR for Over-the-Air TV, you can stream shows to other devices, schedule recordings and take your shows with you on-the-go.

· Stream recorded TV shows to other devices in your home and schedule recordings while on-the-go, either via the Xbox app on Windows 10, or through Xbox SmartGlass for iOS and Android.

· Add, review and edit your scheduled recordings from your Windows 10, iOS or Android PC, tablet or phone while you are away from home with ease.

· Download shows to your Windows 10 phone, PC or tablet so you can watch them on an aeroplane, on a bus – really anywhere – even without an internet connection.

In addition to the previously announced “Forza Motorsport 6” Limited Edition Console and Xbox One “Gears of War: Ultimate Edition” Bundle, Microsoft offers even more options for bringing home Xbox One at a great value this Autumn.

· Xbox One “Halo 5: Guardians” Limited Edition Bundle. Featuring a 1TB custom-designed console and controller, a full game download of “Halo 5: Guardians,” the Warzone REQ Bundle that includes 14 premium Requisition Packs, access to “Halo: The Fall of Reach” animated series, and more. The bundle is available starting 20th October for an estimated retail price of 399 pounds, so fans will have the benefit of pre-downloading “Halo 5: Guardians” to be ready for launch day.6

· The Xbox Chatpad. A new Xbox Chatpad for all Xbox One controllers will let you type messages to friends, enter codes and search apps in seconds. Two new programmable buttons8 available mid-2016 on Xbox One only will give you access to your favourite features like Game DVR, screenshots or apps at the touch of a button. The Xbox Chatpad is coming this November for £29.99 ERP.

· Xbox One Limited Edition “Halo 5: Guardians” Wireless Controller. Featuring a unique laser-etched design inspired by Spartan Locke and UNSC technology, the controller includes metallic blue accents, UNSC military insignias and a bonus Requisition Pack including the Resolute visor. The controller will be available starting in early October for £59.99 ERP, as a GAME UK (and Microsoft) exclusive.

· Xbox One Limited Edition “Halo 5: Guardians” “The Master Chief” Wireless Controller. Featuring the signature green and metallic orange accents of the Master Chief’s armour, the controller includes laser-etched designs and a bonus Requisition Pack including the Dauntless visor. The controller will be available starting in early October for £59.99 ERP.