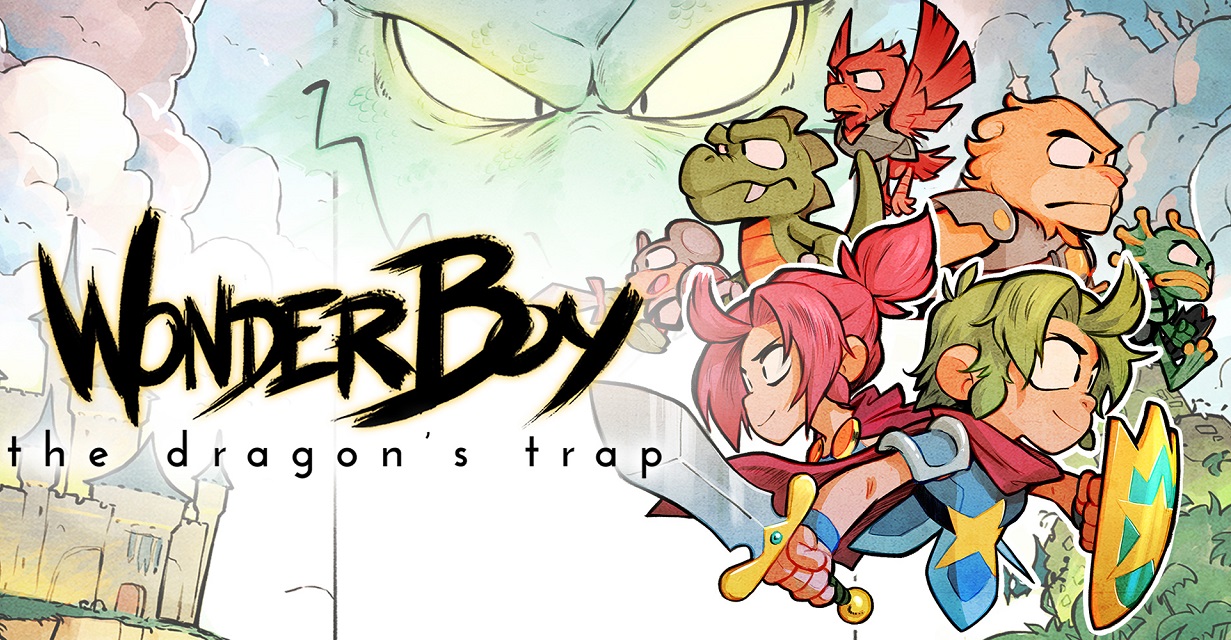 Classic entertainment is constantly being mimicked, remade, or remastered with the end result depending on the care and love put in to breathe life back into the original. There will always be pros & cons when expanding on the original content, but there is usually a positive outcome when it pertains to videogames. Lizardcube has slapped a fresh coat of paint on an almost 30 year old adventure platformer title from Sega, originally called Wonder Boy III. Their focus was to stay true to the original, besides the name change and aesthetics. So, if you’re a Wonder Boy veteran or if this is your first encounter you’ll experience why this was a cult classic back in 1989.

While the entire story of Wonder Boy may seem cliché, it was unique in its own right giving players at that time and even today a fresh twist to the age-old story of the knight slaying the dragon after traversing through dungeons and castles. The initial quest has a young boy setting out to fulfill his quest, but after beating the look-a-like Mechagodzilla you become cursed by the Mecha Dragon’s spirit and are transformed into Lizard-man. While breathing fire may seem like a sweet deal there is no way he is getting a prom date looking like baby Godzilla, so his journey continues to slay the next dragon. With each subsequent dragon defeated you are transformed into a new animal with a unique ability to help you push forward through a variety of enemies and landscapes. 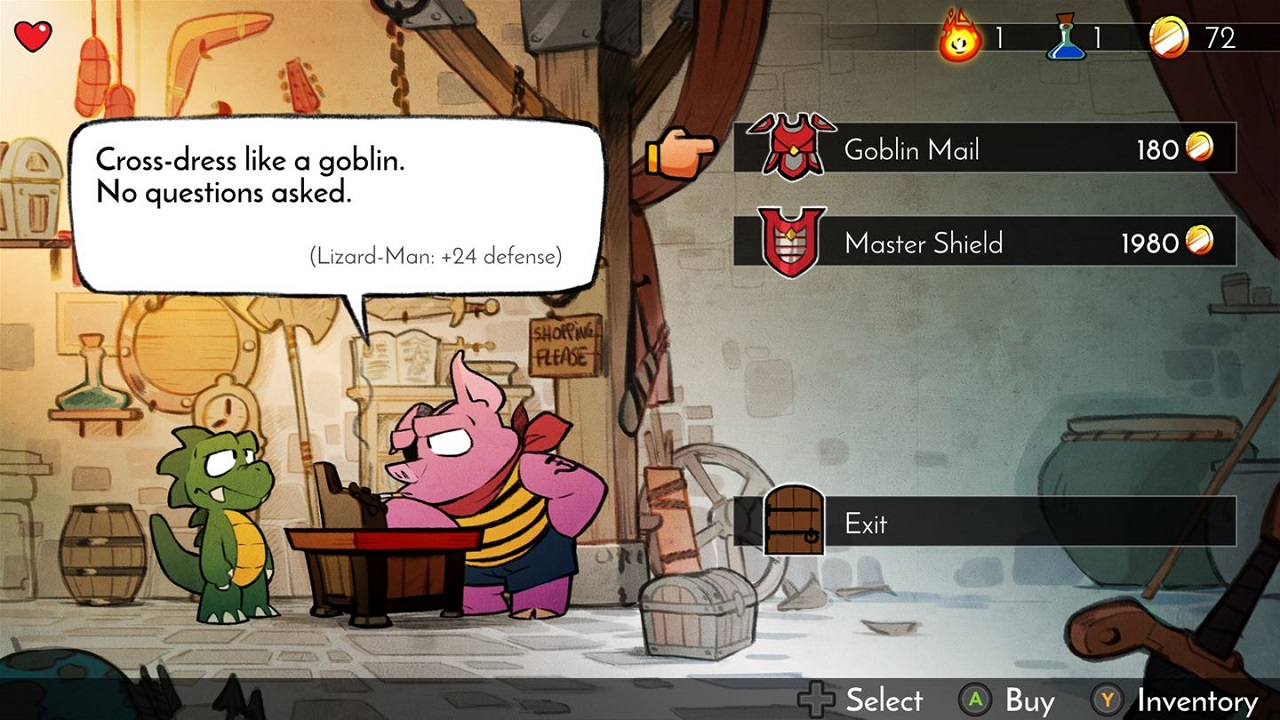 Wonder Boy wasn’t, or should I say isn’t your typical linear platformer like Mario Brothers or Mega Man, but was way ahead of its time making the player return to areas previously beaten to obtain new armor or weapon pieces and even change to the animal form needed to complete your quest. There is a central village that is basically home base where you can access different areas and has a few village folks to help you along the way. There is a Pig-man shop keeper you’ll encounter in various areas of the world who upgrades your sword, shield and armor and allows you to trade in special stones for special loot (I’ll hit on this a bit later). If your health is low there is your stereotypical hot nurse willing to heal you for a small fee and if you are unsure of what to do next there is a Pig-priest who offers hints that don’t help a whole hell of a lot. At times, you’ll struggle with were to go next or what to do now, so if you’re not into exploring and trial & errors this will feel tedious. 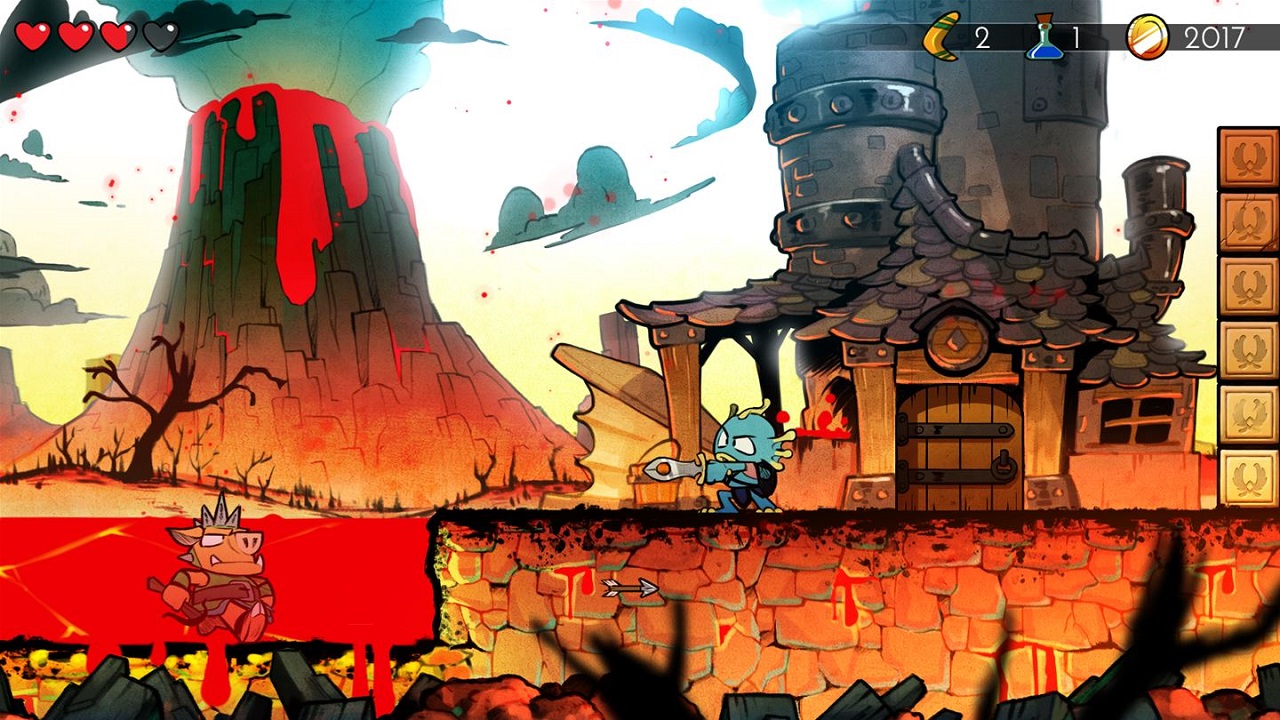 Gameplay has been reverse engineered from the original Wonder Boy III, but all the graphics have been gloriously hand drawn and the music has been re-orchestrated to bring it up to speed for 2017. If you happen to be a fan of the original pixelated graphics or retro soundtrack or just want to compare the differences, you’ll be pleased to know you can switch between each with the touch of a button on the fly. The changes are amazing and the characters’ morph with elegance into the way they were always envisioned to be, but the nostalgic appeal of the original has that charm only 16 bit visuals can produce. As you progress through the game you unlock new concept art which is nothing new, but some of the stills become animated and show all the love put into the recreation. There are also small clips of the live recordings for the soundtrack and something artists or music lovers will thoroughly enjoy. 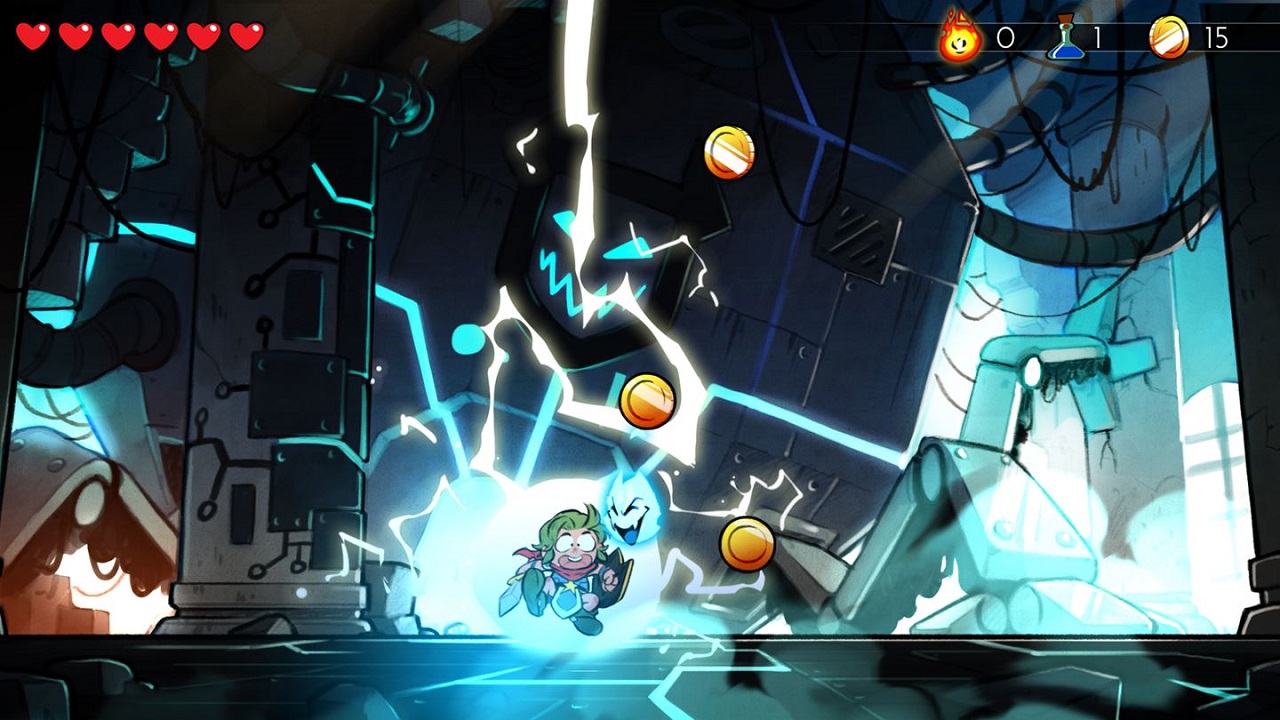 Those with fond memories of playing for hours on end with their genesis controller will (they only had wired controllers back then….unbelievable I know, but you can google it) or those who never knew the game existed will be completely absorbed into the remastered Wonder Boy. It is a solid platformer that takes exploration and pushes the player to keep an eye out for areas to return to or how they can tackle the obstacle in front of them. Repetitive gameplay and basic enemy encounters may knock this game down a notch, but things are changed up enough with animal morphing to keep you interested. Hand drawn images and the unique soundtrack are better than most indie/mini-arcade games available on the marketplace. If you’re wondering if you should buy or skip don’t second guess yourself and give this adventurous little title a try, you won’t be disappointed.