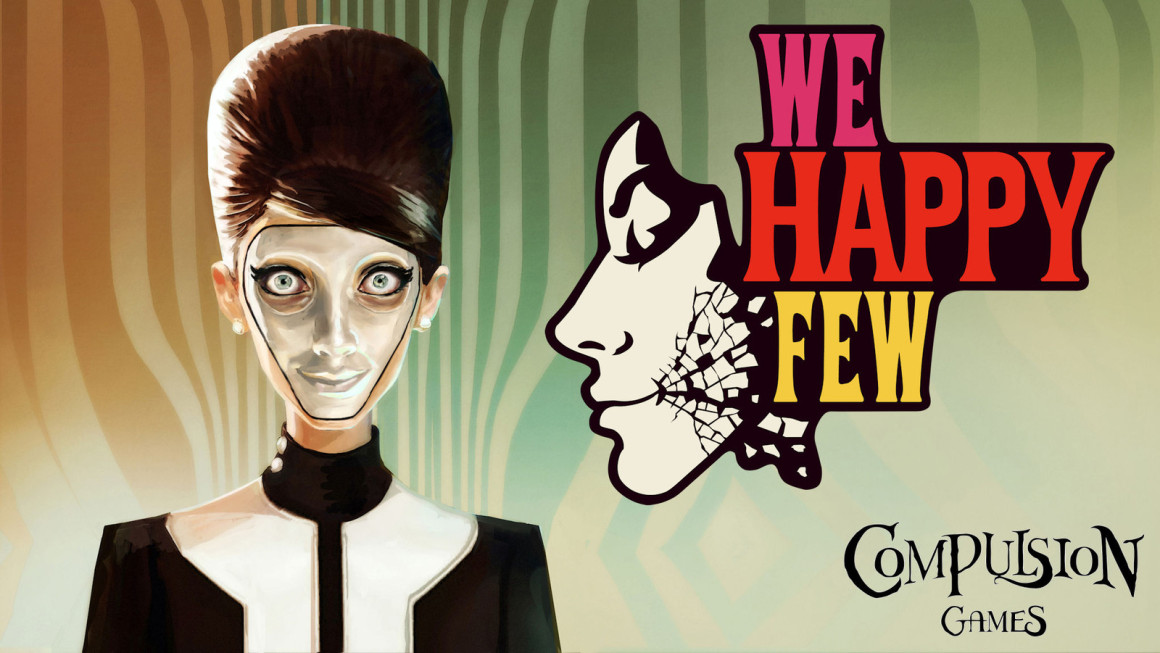 Compulsion Games’ We Happy Few has been in development for quite some time and has finally released on Xbox One, PS4 and PC outside of its early access roots. The game tells the tale of an alternate 1960s England under the rule of the Germans after they win the world war and ship everyone under the age of 13 away to Germany. Set within the town of Wellington Wells, players assume the role initially of Arthur Hastings in his bid to escape and track down his sibling. However, Wellington Wells in under the grip of a population controlling drug called Joy which turns citizens into Joy dependent idiots who see the world with rose-tinted vision and who without question follow the new status quo. Having not taken his Joy, Arthur begins to see the truth and that is when trouble begins.

We Happy Few boasts a procedural generated world where each play is somewhat different, although the basic premise remains the same which is to follow the story and survive at any cost. To begin, there are a number of play options to choose from depending on how difficult you want the game to be. On the default settings players will get a fairly easy journey through Arthur’s starting campaign and once bested can then tackle the Sally and Ollie stories.

The gameplay consists of a fusion of stealth, exploration, survival elements and combat. The survival is the most pivotal because you are pretty much free to explore at your own leisure except, the underlying health, hunger, thirst and tiredness can have an impact on your character’s ability to function effectively. It’s not as impacting as it sounds though, and aside from health and crafting items to keep it suitably topped up, the other factors can largely be ignored (on default settings that is). Players can find plentiful items to eat and drink, and a mixture of bits and bobs to craft other items from. It kind of all works together although in some instances feels a bit tacked-on. The default story could have easily just focused on stealth, health and combat without the need for additional elements to bog the player down. However, granted the additional elements are more important when the difficulty is raised. 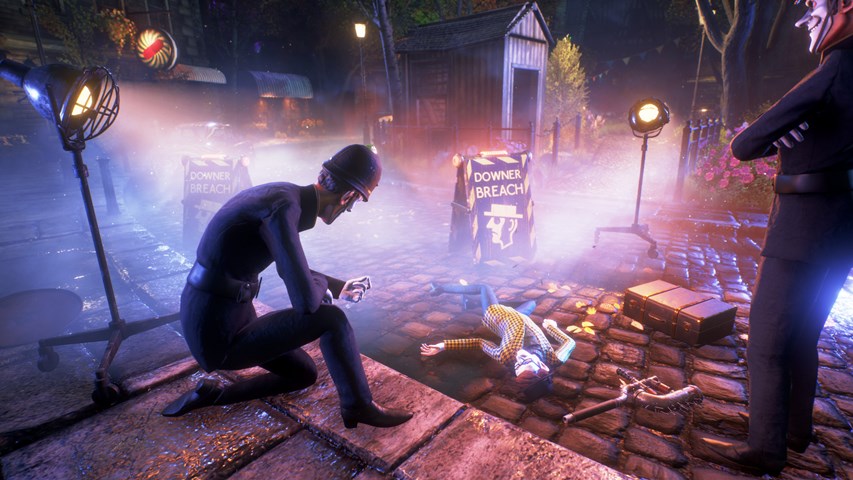 The stealth is a bit of a mixed bag and not really warranting any mastery. Due to the procedural nature of the game, patrolling policemen at night for example, can often be in mass groups all following a similar path making any kind of sneaking impossible. Whilst players can sneak attack and hide bodies, it is far easier to just run as fast as possible, don’t look back, then dive into a side-alley or dustbin or sit down and evade a ruckus until things calm down. It’s all a bit silly and not something purists are going to want to explore despite the promise of better things.

The combat too is very basic with a set of swing attacks with various makeshift weapons, blocking, pushing and charge attacks. There comes a point where once busted, players are public enemy number one and everyone attacks, including the docile citizens who suddenly sport melee weapons. Again, running away and hiding are the best options here negating combat entirely. 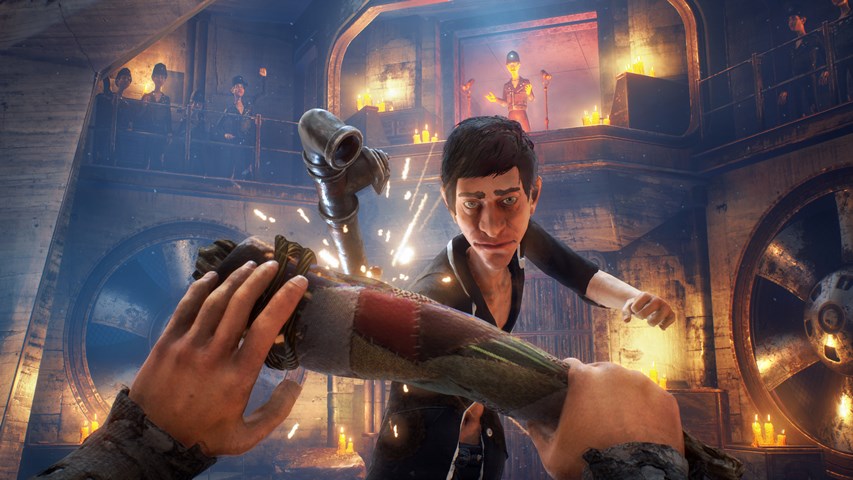 Perhaps the biggest issue with We Happy Few gameplay is the tedium of the quests themselves which mostly revolve around “go here, push that, collect this and get that for me”. It’s an errand boy simulator which after a while begins to grate. It becomes more tedious if players ignore the fast travel options and have to navigate the lands on foot. Whilst the missions remain interesting, the back-tracking and movement just becomes too tiresome. More so, in town areas where the objectives require you to walk (not run) through similar looking streets, out of the way and then back again due to odd building placement.

There are some neat ideas here though such as being forced to choose whether to take Joy or not to progress, some game-show like puzzles, a bit of free-form ways of approaching scenarios and the distinction between upper and lower classes. However, the execution is not as good as it could be which is a shame. 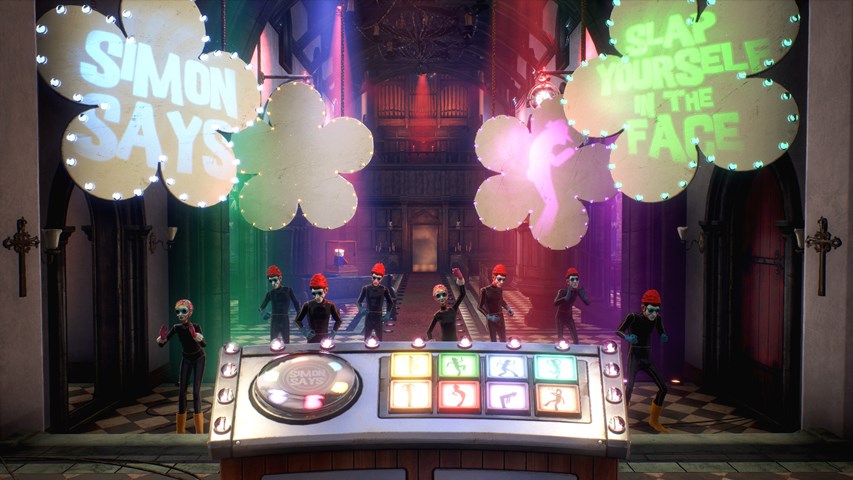 In terms of visuals, there is a dark and moody game on offer here with distinctive characters and interesting locations. If you look at the brightness setting in the options, the developers actually want you to play with low lighting which adds to the mood greatly. It is actually very cool seeing the difference between areas and how things look when Joy is taken, but there is quite a lot of repeated assets which are easily spotted. There are also a number of glitches as well which in some ways fit the odd nature of the overall experience – but perhaps this is subjective. On PC at least using top end hardware the game runs relatively smoothly in 1440p for solid 60 fps and less if you want to the full 4K experience. There are plenty of options to tinker with to suit your PC setup.

Audio is also worthy of noting as the characters are pretty well fleshed-out with decent performances throughout. You get a real sense of Arthur’s bumbling delivery as an unwitting hero in the making. Lots of first person actions during conversations and then seeing him during flashback sequences paint a solid picture of a troubled soul. The secondary characters are also typically British sounding and amusing to listen to even if somewhat deliberately stereotypical. The game opts for a dark humour approach rather than sheer horror which actually works well in context of the game’s premise and the effect of the Joy drug.

Players will get their monies worth here despite the high price tag, with an abundance of replay options and plentiful things to do within the main stories. Expect the hours to reach well into double figures and beyond if you really explore all the game has to offer. 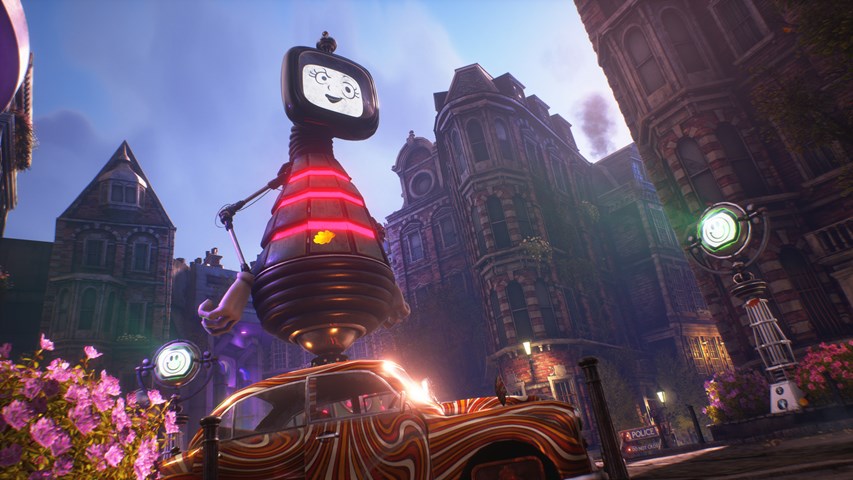 We Happy Few is a likeable game despite some oddities with the gameplay that could do with a little more refinement to make them better suited to the game Compulsion Games are clearly trying to create here. It has come a long way from its early access roots as a more direct experience and is all the better for it. It’s good there are options for a tailored experience, but the mix and match of styles just doesn’t really fit. It does mean players can choose their approach, the end result means those who do want to explore alternate means are unjustly penalised and unrewarded which is a shame. The mission back-tracking is a bone of contention, but that said, the characters and their stories interesting enough to keep pressing-on regardless. It’s not a perfect game but is fun to play and hopefully has room for further improvement now that it has released proper.