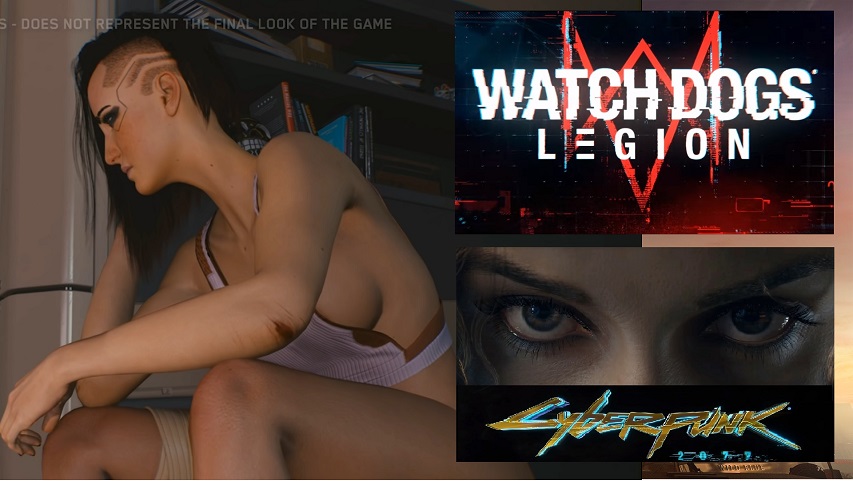 But, before we get into arguments over the fact the two games have many differences plus the fact both games can be enjoyed when they release. It’s interesting to draw comparisons and look at the similarities between the two games raising questions which appeals more or whether they are comparable at all. First up though, a small disclaimer. We’ve not played either game and base our opinions on the gameplay footage we’ve seen thus far which to be frank is enough to at least form an opinion of sorts.

We live in London and really like the near-future look Ubisoft have created with London’s famous landmarks all jazzed-up. Obviously looking at places we’ve visited such as London’s tallest landmark, The Shard and Camden market feels great to see in video game form. That’s a big plus for us even though it’s not the first time we’ve whizzed around London’s streets in the video game – looking at The Getaway…

Night City on the other hand reminds us so much of 2000ADs or Judge Dread’s MEGA City One in many ways. We can’t comprehend how such a metropolis would be like to live in despite visiting Tokyo and seeing the masses of people there. CDPR are going for a very different vibe and obviously a lot more science fiction focused with the Cyberpunk visual theme. So it really boils down to fantasy vs fantastical recreation of reality. Which one is more interesting? Well, you decide for yourselves.

This one is a little different because on one-side in Cyberpunk 2077 you play as ‘V’ as either a male or female avatar. A singular character where the player forges how that character interacts with the world with the choices you make in conversations and the upgrades used in creating the character as you progress. A tried-and-trusted system that works in many role playing experiences. You’re a mercenary for hire looking for the big break in a world where it’s survival of the fittest. If you hit rock bottom, then is life even worth living, but if you make it big, then it’s party time and a life of luxury with all the trimmings.

In Watch Dogs Legion, it’s a different scale altogether where it’s the people against the oppressive new rulers of the land. Ubisoft build on their past idea of tagging characters and turn it into the main gameplay hook. You are not one character but an organization – Ded Sec comprising of multiple characters each with their own traits. However, and here’s the big deal. Players have a choice in which characters they recruit to form their version of the Ded Sec organization. Want a group of highly skilled female assassins then that’s possible. Old lady killers, yep that too. Hipsters, crackheads errr maybe not crackheads, punks or secret agents, then yes the choice is yours. Anyone who knows our preferences then it’s got to be highly skilled fem-fatales for us all the way!

The two games are worlds apart with some ideas and exactly the same in others. Obviously players adopt which approach to use given the situation they are in, a shared theme in both games. However, it is possible to pacifist your way through the entire Cyberpunk 2077 game. Not sure how a pacifist approach might work with Watch Dogs though as it’s been said despite non-lethal weapons might not mean a complete pacifist playthrough. That said, both games employ Stealth, Action, Guns, Sneaking, Hacking and Upgrades! Watch Dogs hook of recruitment gives it a slightly different angle here because the players characters aren’t permanent. Finding and recruiting your crew is an entirely different mechanic that offers its own gameplay quirks in itself.

Early next year is going to be a fantastic time for fans of open-world experiences. Cyberpunk 2077 has been years in the making and leaves players, (us included) reaching fever pitch for its release. It’s original and in a genre that hasn’t been explored fully so far, although today there are some great games that use the theme. Watch Dogs Legion on the other hand comes off the back of two previous games so there’s a bit of familiarity . However, the recruitment aspect has us stoked and we can’t wait to see how the gang-team-building mentality works in such a game. Exciting times ahead indeed and if we’re to be honest, Watch Dogs Legion seems like the perfect game to be playing leading up the release of Cyberpunk 2077. In this regard and with their differences, the two games compliment each other. Stroll on 2020.