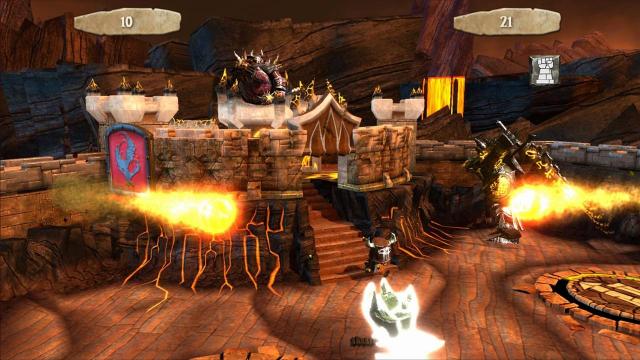 Atari’s action packed multiplayer game Warlords hits the XBLA and PSN with a dose of dragon thrown in for good measure. The game is all about defense whilst keeping an eye on your fellow opponents and is available now for 800 MSP/$9.99. Take a look at some screenshots and game info, and of course, there’s a trial version to download to see what it’s all about.

Warlords is a one-to-four player arcade action game in which players will defend their castles from a maniacal dragon, unleashing a torrent of fireballs and crafty minions against their strongholds. In this whimsical reinvention of the beloved classic, players will face the ultimate battle of speed, strategy and survival. In addition, the game will increasingly challenge players to multitask as they strive to shield the castle walls and simultaneously rally troops to capture control points, collect power-ups and destroy the other warring factions – either alone or alongside three other players.