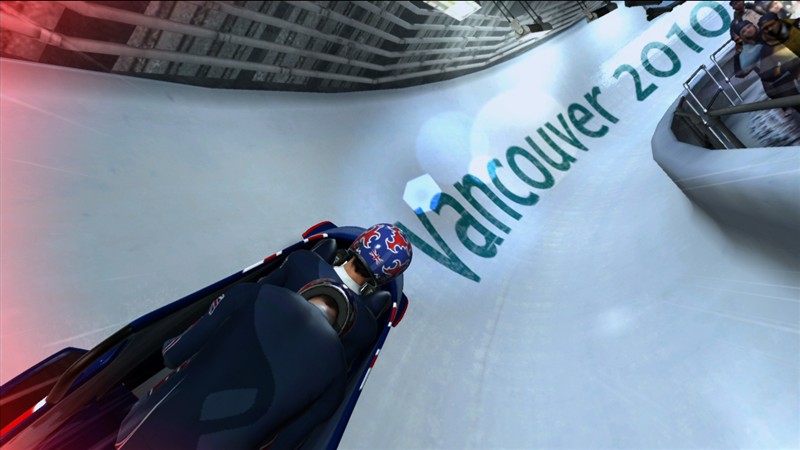 The Winter Olympics begin in February 2010 in Canada and to keep up with the snowy momentum, SEGA have embarked on publishing the official tie-in video-game of the event. From the warmth of your armchairs and possibly without a speck of snow in sight, the game allows you to take part in a number of events for that perfect recreation of wintry sports. However, not all of the events are crammed onto the disc, but there’s enough to keep the competitive entertained. So, without further ado, is Vancouver 2010 the video-game worth picking up?

The game offers some 14 events to take part in where you’re able to train and try and reach personal best times or compete with online scores. You can jump right in to the actual Olympic games and try single events or go the whole hog and tackle the entire 14 in sequence. There’s a lot to initially take in, although some events do share similarities in how they are set up. Things like the Giant Slalom or Super G downhill skiing events require navigation down the wintry slopes with the onus on setting the fastest time. Controls are precise and the general flavour is captured well. Although sometimes it’s quite hard to see where you can shave off those 100ths of seconds to best the top scores and potentially grab a gold medal. There’s a bit of trial and error and with one circuit per event means you can learn the lie of the land and improve that way. The skiing/snowboarding are perhaps the most engaging of the events on offer as the control feels more open. Events such as the Ski Jumping feel much more constrained with fewer inputs. In this case, hit a button when the wind is at its lowest tap a button to launch then press another to build power, release for the jump at the optimum point, then use the L and R triggers to steady whilst in flight, before tapping a button once more to land. Very simple and very easy to master within a few moments.

The freestyle skiing offers a slightly different approach where you’ll need to select which type of move you’re going to perform, and then rotate the two thumb-sticks within areas of a circular dial that appears on screen before landing. It’s simple and again once mastered offers very little challenge. Speed Skating seems to offer more traditional button mashing where quick fingers will see you reach the gold quite easily. The long distance 1500m speed skating event changes things up a little where there’s an onus on timed presses to keep speed going. Not the most engaging of events to feature and not good when the 500m event is so similar. In fact this is the main problem with the game, there are lots of events in the Winter Olympics but the developers whilst may have chosen the most popular, in game terms leads to a lack of variation. where’s the Ice Hockey, or the Biathlon, where’s the curling or Ice Skating – cross country anyone? It’s a shame and ultimately leads to a game that’s going to be placed back on the shelf sooner rather than later.

To counter this, the game offers some challenges which are variants on the events. Things like downhill skiing whilst avoiding snowmen, or beating a developer’s time and such like. These are perhaps more interesting than the main events and are required to flesh out the game.

The game looks pretty slick in most areas where it counts, and you’ll feel the Olympic glow as you stand on the podium to accept your rewards. The recreation of the events is very authentic with official venues being used, and there’s no denying the research was thorough and the ease of play tailored to suit the events. In this regard, the developers have done a good job. As expected, there’s a lot of white on screen but this is broken up by some rather well designed character models sporting their nation’s colourful outfits. Some of the background scenery is also of a high standard and helps to draw you into the scale events.

The sound is a bit of a let down as someone decided that Indie rock tracks would suit the nature of the game. In fact the music does nothing to capture the grandeur of the games and is possibly going to annoy some players. A little more thought could have gone into the music to be more fitting, but this is perhaps down to personal taste. That said, the option to mute the music and have the ambience of skis on snow bellow from your speakers is perhaps a more welcome one in this game than most.

It’s not going to take long to suss out the majority of the events and win gold medals versus the AI, who at first seems to be quite challenging until you figure out what needs to be done. The only other challenges come from going head to head with three others on or offline, or tackling the challenges. In all, it won’t take too long to complete these and then once done there’s little incentive to keep on playing, unless you really do want to continue to shave of those 100ths of a second.

Vancouver 2010 the video game isn’t a bad game as it does capture the essence of the winter Olympics. However, a lack of variety with the events makes for a game that’s not going to hold interest for too long, especially once mastered. The challenges are a welcome addition to the package, but do little, other than offer similar distraction from the main events. If you’re looking to take home a slice of winter Olympic action then perhaps renting this game would be a better option – or better yet, just watch the games live on TV.