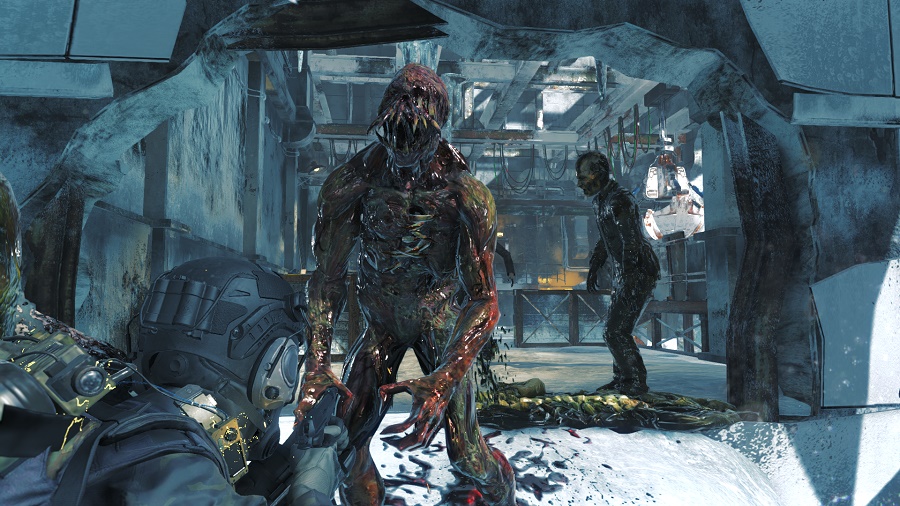 Capcom released a new trailer showcasing a rather familiar antartic map base(from Resident Evil Code Veronica) which will feature in the upcoming multiplayer shooter Umbrella Corps. You can also take a look at a newly revealed mutated zombie in the image above which players will encounter in the single player Experiment Mode Umbrella Corps is coming to PS4 and PC on June 21st.

The Antarctic Base, set within the Umbrella research facility, was never repaired after the deadly T-virus incident witnessed in Resident Evil Code: Veronica. The base remains in its heavily destroyed state, featuring a vertically expansive play area covering three floors that allow players to endure a thrilling fast-paced round of hide and seek gameplay. Perhaps the most tactical map in the game, players can utilise cover points, interwoven ventilation ducts, and ladders to unleash deadly surprise attacks on their foes.

Also being added into the shooting mayhem are the special “Mutated Zombies” that can be found in the single player Experiment Mode’s Antarctic Base map and in the Multi-Mission Mode’s SP DNA Hunter ruleset. Featuring advanced states of mutation, there are many viruses spreading across the infected zones in Umbrella Corps and it’s unclear whether the T-virus or C-virus is responsible for these blood thirsty enemies. Harder to defeat than normal zombies, not only are they unaffected by the Zombie Jammer, but they are also able to render the Zombie Jammer temporarily ineffective against other creatures near the player.