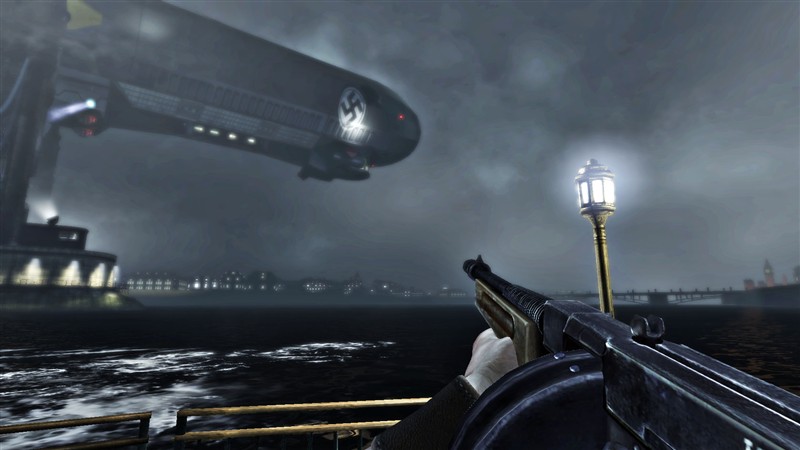 World War II games have been fairly commonplace over the last few years with few notable games to make a huge impact on us gamers. Activision’s Call of Duty series and EA’s Medal of Honor are probably the most well known and have provided a wide range of missions versus the German/Nazi onslaught. Whilst the games have to a degree been historically correct in terms of locations, the general idea of killing Germans during this period of our history has been the recurring theme and one you can’t really deviate from.

Codemasters and Spark obviously felt that gamers aren’t tired of shooting Germans and rather than provide a WWII game by numbers type experience, have tried to re-write history by adding a little fiction thrown into the mix like a well placed cooked grenade. Most people interested in WWII history will have heard of Sir Winston Churchill’s visit to New York in which trying to cross a busy road, looks the wrong way and is almost killed. Well Spark have taken this concept and changed things a little, where Churchill doesn’t survive, resulting in the coalition forces being left in disarray as Germany takes over Britain and begins its full scale attack on the US mainland in 1952. It’s an interesting idea, yet at it’s heart the game is still a WWII first person shooter.

Players control lowly construction worker Dan Carson, who witnesses the destruction of NYC as the Germans begin their invasion. Somehow, as if God is looking after him, Dan survives the attack and has to make his way down from the skyscraper he is working on to help join a resistance movement that aims to push back the German tyranny. From the offset you are thrust into a chaotic situation where obviously you are unarmed. The opening moments act as a minor tutorial and highlight the game’s minor platforming element. Once Dan reaches ground level, the game becomes more standard fare as he equips himself with a German made MP40 and starts dishing out punishment like a pro, kind of.

The first thing most gamers are going to notice is the aiming, which feels way too over sensitive. You can change the sensitivity in the menu options, but with only low, medium and high settings to toggle rather than the usual sliders, means you may end up not finding a calibration that suits your play style. Therefore, as a gamer, you are expected to adapt! I left it on the medium setting as I found Low easy to aim, but turning speed to be extremely sluggish. Dan can aim using the iron sights, which offers a little more precision but somewhat slows down the action. I’m not sure whether Spark have deliberately made the aiming to be so poor to realistically mimic Dan’s lack of weapons training, but either way as a game mechanic it really does let the game down to begin with. After a while and upon finding more accurate weaponry, I got used to the aiming, but even at the end of the game it never really felt comfortable. There’s definitely some horrid hit detection at work in this game as well, which most certainly rubs painful salt into an already open and bleeding wound.

Dan is thrust into a wide range of situations as he follows the resistance movement across NYC, then onto Washington DC. It’s nice to be able to visit these locales in a WWII game, but the over familiarity of shooting at Germans dampens the whole experience. Typically you are able to carry two guns at a time and several grenades and you’ll often be presented with situations where you’ll have to try different tactics, such as using mounted gun emplacements, sniping dug in targets, shooting boats with a RPG or getting underneath tanks to set charges. There’s certainly enough scope and variety but there’s really nothing new other than the locales.

What is new are some minor gameplay features that will really annoy you or you’ll love. I’m still on the fence as I found them to be rather inconsistent. For starters, you’ll be able to grab enemies in close quarters and use them as human shields, or if you are feeling tough, you can instant kill them. A neat touch is being able to perform environmental kills, such as smashing a soldier through a TV set amongst other gruesome actions. It seems the character Dan Carson, reached breaking point and becomes this stone cold sadistic killer, making his character even more unbelievable. As I said, there’s a distinct level of inconsistency here and at times you’ll try and grab a solider, but because the on screen prompt doesn’t display means you can’t, it’s frustrating at best.

Dan can also climb objects to reach his objectives, such as ladders, boxes and such like. There’s also a shimmy move and the option to grab ropes to move across wide gaps. Rather than present the player with a more free form approach, the route is totally linear and makes these actions feel tacked on with no redeeming sense of purpose other than to break up the action unnecessarily.

Turning Point uses the Unreal Engine 3 which I really don’t need to remind you is the same game engine that powers the graphical showcase of Gears of War. It just seems to me that either Epic Games are hiding something, or really not offering third party developers the tech support they should be. Turning Point looks average at best and features some horrible glitches and graphical hiccups that are embarrassing to say the least. There’s some incredibly rubbish running animations, dodgy AI and some bland scenery that will make you wonder what the developers were thinking. Admittedly there are some moments that look better than others, but the generally dark nature of the game offers very little variety for the most part.

The sound is actually pretty decent in terms of sound effects and music. I can’t really say much about the voice acting, as it felt standard fare to me. The music in particular is an orchestral soundtrack that suits the mood of the game and seems to drive the gameplay forward at the right moments. It’s just a shame you really feel detached from the emotion the score provides due to the basic and numbing gameplay.

Turning Point isn’t going to last very long and can be beaten in a rental period if you stick at it. There are what feels like, some very frustrating checkpoint distances at times, but nothing competent gamers will have come across before in other games. There’s some interesting achievements to be gained from the single player, and if you are feeling compelled you can replay the game on harder difficulty settings for added challenge. For the competitive gamer there are online multiplayer modes to mess around with, but with so many better first person shooters available, you’ll be hard pressed to find loads of players to compete with. For me, playing through the single player once was enough and once beaten I had no compulsion to start the over again. The game just didn’t draw me in enough.

Turning Point: Fall of Liberty is a novel idea on paper, but is ultimately let down by its shooter by numbers gameplay and under par presentation. When there have been lots of WWII shooters in the past and a general vibe that gamers are somewhat tired of the theme, then you’d think as a developer you’d really try and make something memorable and special. Sadly Spark have failed to do so, and with all the hype they made prior to the game’s release, it seems they are somewhat out of touch as to what makes a compelling and amazing gaming experience. For the most part, I gleaned as much fun a I could from the game, but with no real redeeming features to keep me hooked, everything felt lifeless and dull.

I would only recommend renting Turning Point and that’s if you are bored of the current crop of shooters available. There’s a minor amount of fun to be had here, but with so many things that could have been better realized, the whole idea has been a wasted opportunity in my eyes.