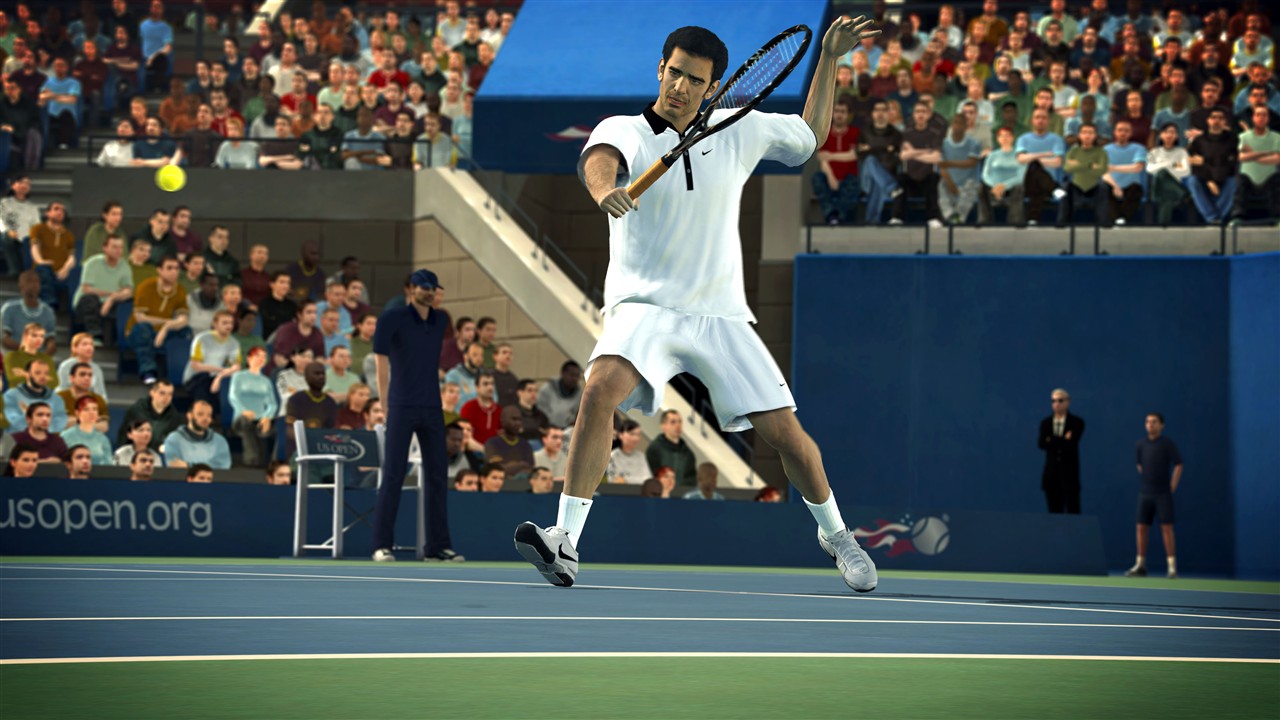 Hot on the heels of Top Spin 3 which released in June 2008 and was met with mixed reaction comes Top Spin 4 from 2K Czech where the game has seen some improvements alongside the inclusion of an all star roster. Offering similar court antics to its predecessor does it present itself as a game worth picking up or are tennis fans better off sticking with what they already have?

The biggest draw for tennis fans aside from how well the gameplay recreates the game of tennis, are the players in the roster. On this occasion 2K have really pushed the boat out to include a wide range of popular tennis heroes from both the past right up to the present. Gamers jumping into the exhibition option can get stuck in choosing perhaps Pistol Pete Sampras or going back further and gunning for Boris Becker. There’s a decent selection of modern players such as Andy Murray and Roger Federa to name but a few So that everyone’s covered.

The gameplay remains similar to its predecessor whereby you still have to charge slice,lob, normal and top spin shots by holding down the face buttons, then releasing with the right timing to get the perfect return ball or serve. It works, but makes for a challenging entry for those more used to simply hitting a button when a ball comes near. This mechanic is still present, but are a limited fraction from your repertoire of moves. Holding direction in multiple directions determines the width or length of shot and there are also further tweaks you can make by holding one of the bumper buttons. It is all a bit too much to digest for newcomers and so a handy tutorial option is available to take you through the basics and advanced stuff as well. In fact, the best place to really learn the ropes is to jump in to the Career mode. It’s here where you’re able to create a character with some fairly time consuming and precise options should you choose. Once done, you’re then tasked with rising up the Top Spin ranks versus AI starting in basic exhibition matches working your way up to flamboyant and grandiose grand-slams.

The journey isn’t an easy one and from the offset the AI will probably knock you down a few pegs or two, and it’s here where you’ll begin to appreciate that there’s an element of learning involved. Luckily your efforts aren’t ever in vain as the game uses a comprehensive XP system for levelling up your character and ultimately assigning points into various aspects of your physical and skilled game. There’s a level 20 cap, but the differences are noticeable and worth the time investment. What’s neat is any XP gained in other modes will transfer to your career mode character, meaning you’ve got some sort of control over how the progression is paced.

The matches are realized very well with some tense and invigorating bouts, furious rallies and some close call moments to keep you hooked. You’ll notice the stark contrast between private matches with few spectators to the bigger events with 1000s of people cheering you or your opponent on and it’s when things get big the atmosphere reflect that perfectly. However, there is a lot of fluff, and whilst tennis might be exhausting for the players in real life, conveying the same pace in a game, whilst realistic, is sloth like and very dull to watch. Thankfully you can skip all those moments where there’s no actual tennis being played when it’s the camera focused on a pensive looking player, or players taking a break between games that begins to get tiresome after about half an hour’s play.

The career mode offers interesting parameters to break up the games of tennis whereby off the court you can gain additional skills by employing a coach. Once under your employment you’re then tasked with performing specific moves during your games to unlock their associated skill for your usage. It’s a decent system and means you can tweak your stats slightly for a bit of an edge. You’ll also have to do all of you PR work – such is the life of a rising tennis superstar – which means checking through emails and then deciding on partaking in extra activities to gain fans and XP. Career progression is linked to how many fans and XP you have, so it’s an integral part of the character development process. Unusually it’s perhaps here where some graphical showcase of the characters could have been employed, yet unfortunately this is merely a text based routine that offers no bells and whistles.

There’s a pleasant sense of capturing the essence that is tennis within the core gameplay, this much evident once the controls ‘click’ with you, however, the overall look of the game is rather hit and miss. On one hand you’ve got some excellent recreations of the real life Tennis superstars who sweat, show emotion and generally look very much the part. On the other hand you’ve got some horrendous looking filler players who look better suited to the leading bad guy roles in a horror game. Some are simply poor, ugly to look at and generally haven’t had the same attention to detail added to them as their pro counterparts. Perhaps it’s a minor niggle but with a game that focuses a lot on the players, is more noticeable.

The stadiums have been well created with a lot of the main arenas such as London’s grass courts in Wimbledon, but we still have stiff looking audiences and all the extras around the court that don’t actually do anything. For example, you have ball boys at last, but other than just looking like they are doing their job, you’ll never see them move simply because the game loves to switch camera view to a close up of the player as often as possible. Another minor issue that will no doubt cost you a point or two is on some courts the yellow coloured balls blend in a bit too well with the court, making some fast balls hard to spot. Yes, you can change the camera angles using a few preset views, but this doesn’t always alleviate the issue. The option to perhaps change the ball colour would have helped matters.

Top Spin 4 offers stereoscopic 3D support which is an added bonus for those who have 3D compatible equipment, however, the game style doesn’t really lend itself well to 3D simply due to the static camera. If you do watch the various scenes between points then the effect is more profound, but not really a showcase for the technology, and not really adding much to the core game on a visual level.

Top Spin 4 does get the sound right, and it’s probably safe to say that any game which features an option to tweak how often and when players are likely to grunt is up there with the best of them. The biggest positive garnered from the Top Spin 4 experience is the almost faultless atmosphere. The last game was criticised for not being realistic enough, and it appears 2K have taken those on board. The audience feel so much more a part of the matches now as they cheer, jeer and comment at the right times, the umpire even uttering those words “quiet please” on occasion. The improved audio does make for a more believable competition all round and it’s good to see the grunts in full effect, simply because it’s part of the intensity and determination of the players that you’ll see in real life.

Sadly there’s no commentators but you will be pleased at localized umpires to kind of make up for it. With the relatively slow pacing should you not skip all the cut scenes during play, it makes sense for a bit of commentary. So it’s surprising it’s not included and simply highlights that those cut scene moments more unbearable to watch. A bit of commentary would have spiced them up considerably and with facetious dialogue could have added a bit more immersion for those wanting to create a TV like experience.

You’ll find plenty of tennis games to wade through in the game’s career mode, offering lots of items to collect such as clothing and accessories. With the option to tweak some of the settings means you can create quick fix games or go the whole hog with four set, six game matches. There’s a super tie break option which is a first player to 10 points setting if you’re after more speedier matches. Aside from taking the game online and seeing how you fare against others in singles or doubles matches, or sticking with localized play with friends there’s the option to choose one of the showcase superstars and match them up against a worthy opponent to create dream match up scenarios. This is fun to mess around with in the exhibition mode and something that multiplayers will enjoy collectively. Like all sports, there’s only so much you can play before monotony sets in, which is perhaps a given. So, as a game to dip in and out of from time to time is very much accessible in this regard.

Top Spin 4 gets a number of things right with its impressive roster of superstars for dream matches, a comprehensive gameplay system that puts you into the game very well, excellent audio and some fiery attitude when it comes to presentation. It’s an improvement over its predecessor and one that’s worth picking up if you’re a fan of the sport, or simply looking to exercise your thumbs in other ways. However, the dodgy character models, a reliance on snails pace tennis between points/ games, and a lack of commentary knocks it down a few notches.

Top Spin 4 isn’t the most accessible game for newcomers as there’s a bit of a steep learning curve to begin with. However, stick with it, learn the strokes,start winning matches and you’ll be rewarded with a deeply atmospheric, precise tennis game that’s actually pretty darn good to play.