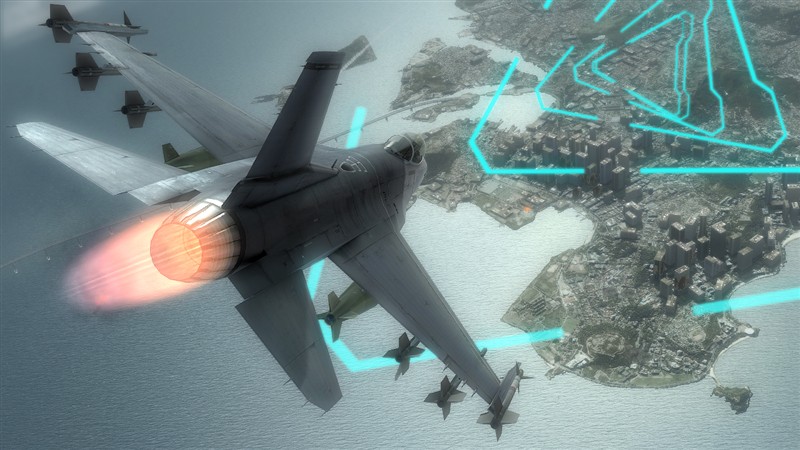 Flying games seem to come in a variety of forms but are less in number than the more ground based shooters. We’ve had plenty of first person shooters, and third person action games, but it seems aerial combat is an area that appeals more to a specific gaming demographic. You either love fighter craft, or you’re quite content keeping your feet firmly on the ground and looking at a weapon in hand as opposed to a HUD and cockpit view of an aircraft.

Ubisoft has attempted to offer an aerial shooting experience that isn’t dipped in a WWII setting, and instead has the famous Tom Clancy name plastered all over it. Which in turn means gamers get to experience a flying game that thrusts a modern day/future setting upon you. You’ll see a lot of cross referencing from the other Tom Clancy games, such as Ghost Recon and Splinter Cell, but the main propulsion of the gameplay revolves around the element of high tech gadgetry which is a synonymous trait of the Clancy franchises.

H.A.W.X allows you to pilot the fastest and most combat efficient fighter jets of our time and with a new ERS system means that even those who are less familiar with aerial shooters, can perhaps learn a little from this game. The question that is raised, is whether the inclusive nature of the game has made the experience a little too tailored towards mass appeal at the expense of keeping veterans well and truly challenged.

HAWX is pretty much as you would expect from an aerial shooter, and from a Clancy endorsed game from Ubisoft. You’ll have an interwoven story line, which can largely be embraced or ignored, a mission briefing, and finally a craft and weapons selection before heading off into the skies. There are some nuances that lend uniqueness to the overall game, but quintessentially the art of dog-fighting and taking out ground targets remains the same. Lock-on and fire missiles, or bank hard and evade incoming missiles, oh and avoid flying too low to avert your expensive craft smashing in to a building or the ground.

Now what HAWX throws into the mix, that is a little different from other games, is the ERS or newbie system as I like to call it. This basically is similar to the sat imaging the Ghosts have in Ghost Recon, you know, enemies being marked on your screen, and thus making your job far more easier than previous games. HAWX uses the same idea, but this time its use is reserved for mapping out an optional flight path for various situations. So for example, a ‘bogey’ is circling you, a simple tap of the X button will reveal an optimal flight path which if followed, should have you placed in the most tactical position for taking out your opponent. This is very useful for gamers who aren’t so clued up on how to perform special dog-fighting maneuvers and effectively teaches you how to adjust your flight speed and angle. It’s a welcome addition for newcomers, but for the most part seasoned vets will find the feature pretty much redundant.

The other element that is thrown into the mix is being able to turn off the hi-tech control system and fly freely without aid from the CPU. The game switches to a more distant viewpoint, and effectively allows you more maneuverability, but offers some fiendish controls to get to grips with. You’ll easily be able to dart around multiple targets, laugh at incoming missiles and general look pretty shit hot as an ace pilot (unless of course you lose your bearings and decide to paint the ground a shady red and black colour). However lining up the lock-on becomes a lot more tricky to keep steady, due to the viewpoint requiring slightly more refined inputs from the controller. It’s neat, and can be toggled on the fly, which ultimately means the player makes the choice. I like the feature as it offers a very cinematic view on dog-fighting, but it’s still pretty cumbersome to the point where I found it quicker to use the standard mode to take out enemies.

HAWX pushes all the right buttons by offering real world aircraft and well suited missions for each one. There are some 50 aircraft which you’ll unlock more as you play through the campaign and level up you character (by gaining rank). This is quite an interesting feature for a flying game, as the whole ranking system is another Clancy endorsed game trait. We’ve seen it in all of them on Xbox 360 – more so for multiplayer. So, it’s nice to be able to work towards an overall objective outside of the story. You’ll be awarded EXP for each kill and for completing any bonus objectives. A result screen at the end of the mission informs you what rank you’ve achieved and if you’ve unlocked any bonus craft and weapons load-outs.

The missions themselves I found to not only be standard fare, shoot, protect, shoot some more etc etc. But very arcade like, to the point where I felt somewhat detached from the overall campaign. All 19 missions are quite short, and I was almost expecting some radio chatter to cut in on a number of occasions, informing me that the mission was far from over, but alas it was. The game offers a number of checkpoints mid-mission and this somewhat aids in making a game that is more on the easy side than challenging. I started playing on the game’s Hard setting, but this for my skills, was a cakewalk and offered little to no challenge whatsoever – somewhat undermining the definition of the word ‘Hard’.

So I was left somewhat underwhelmed by the whole experience and tried a mission on Elite setting, and even this wasn’t as I would have expected. I shall have to return and play through the entire game on Elite and hope that the game steps up a gear in the later missions.

HAWX looks very authentic indeed, it has some excellent presentation via the menus and HUD, a joyous sense of speed and an overall level of polish not to be scoffed at. The combat whilst rather un-challenging, still felt very solid and looked as satisfying as you’d expect. The aircraft models are perfect recreations of their real life counterparts, and it’s always nice to be able to switch viewpoints on the fly to suit personal tastes. Your missions take you all over the world from L.A. to Rio De Janeiro, with sorties during the day, dusk and night. So you’ll get to experience a real visual treat looking at the game’s obvious use of satellite images to create the lush and populated landscapes. I didn’t encounter any issues at all with the graphics, which points to some very high production values being employed.

To be honest, I felt the inclusion of a dramatic soundtrack not only felt a little contrived, but intrusive as well. There’s something about having an authentic looking game, and some musical score pumping out like a movie that detracts from the experience. Especially as the soundtrack offered nothing memorable or unique. There’s a lot going on with the radio chatter and that seems to be the main focus of the audio. You don’t really have any space to focus on the music that’s idly blaring out in the background. That said, the voice performances are as you would expect and offer the same high production values that rest of the game has in abundance. The sound effects are also well realized and if it wasn’t for the music you’d appreciate them a lot more. I assume most purists will mute the music in the options.

The game offers a slightly lacking campaign when it comes to game length, with most gamers being able to complete it in a very short space of time I would assume. The addition of drop in, drop out co-op play for four players is welcome and means you’ll add a lot more life to playing through the missions. With the game’s EXP system you’ll probably have to play through the campaign at least twice to reach the level 40 maximum, and unlock all of the game’s extras. However for those who get bored easily then you’ll probably spend a lot of your time jumping in and out of Co-op games or the adversarial modes. If you can imagine the sorts of antics associated with first person shooters such as TDM, DM etc, but instead in the skies, you’ll get a picture of what’s on offer here.

I’ve enjoyed playing HAWX, and can appreciate what the developers have tried to do here. They’ve created a game which is highly accessible for newcomers, not overly long to reduce you to boredom or for reviewers to throw the word ‘repetition’ around freely – which is often the case with games of this nature. The EXP system is welcome, and the online additions add more longevity for those who desire it. However, in terms of challenge, the game is severely lacking as far as I could tell and so fans of the genre might feel a little disappointed. Sure, purists can set the game to Elite difficulty on their first play, but then what’s left after that has been completed other than online play?

If you like aerial shooters, then you’ll probably rush out and buy HAWX regardless of what anyone else says, and to be fair you’ll certainly get your monies worth if you delve into all modes on offer. If you’re a newcomer looking to branch out from your usual haunts, then you would do well to give HAWX a look in, as it will offer a game which you’ll instantly learn the ropes and act all top gun after an hour’s play. With some high production values, the classic Clancy name plastered over it, the oh-so familiar plot, and some very solid gameplay, HAWX is a worthy addition to the Xbox 360 line-up of shooters.