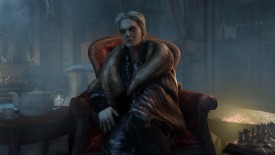 Eidos Interactive’s Thief has been met with unadulterated praise from some quarters, and scepticism from others and yet there’s a solid game here that captures well the element of sneaking around in the shadows and nicking other peoples belongings ad infinitum. However, there have been a number of reported issues with the game which have caused frustration, and in our case  when the following happened (see video), the rosy  love affair quickly turned sour. Like giving a cheating lover a second chance after catcher her with a neighbour in our bed, this moment was perhaps the final nail in the coffin. Joking aside, it does raise some serious questions as to how the game has been released  in such a poor unstable state and seems to highlight a growing trend with today’s games which seemingly get rushed out for release with the mentality that any problems can be fixed via a patch at a later date – after money has changed hands. Thief.