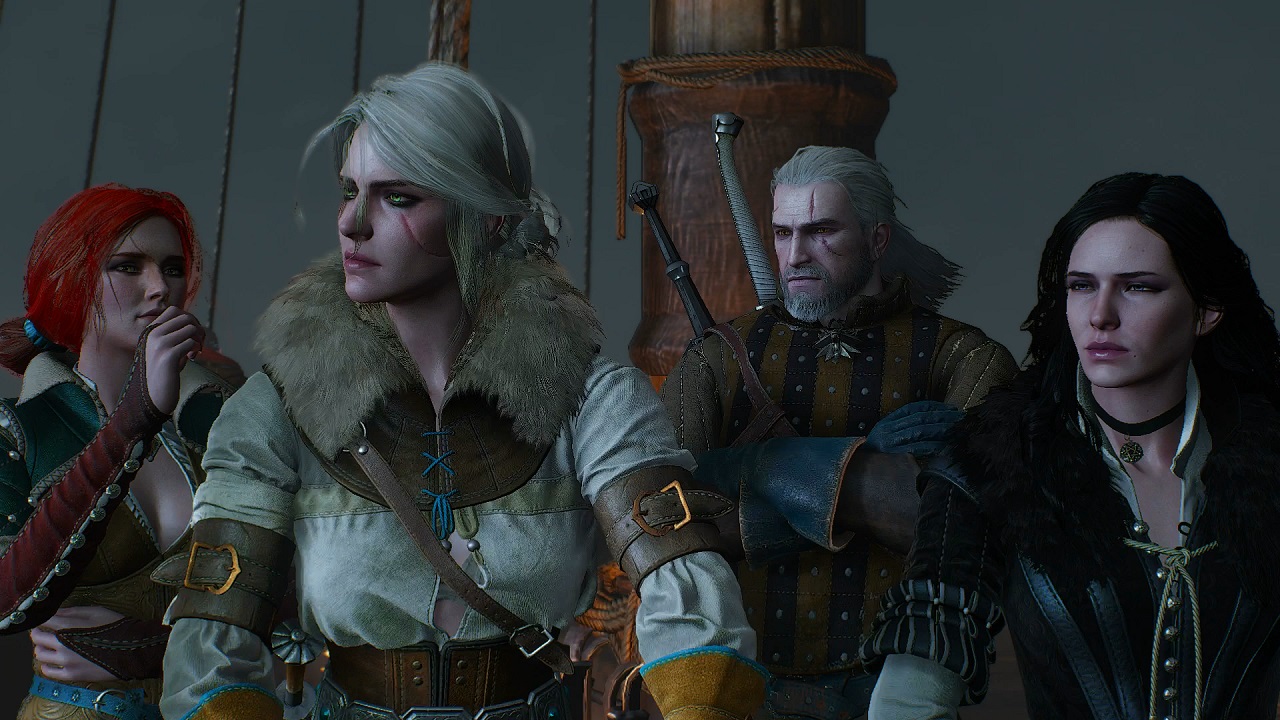 Having spent the obligatory last three weeks solidly playing CD Projekt Red’s magnum opus The Witcher 3 Wild Hunt before passing judgement I can truly say I’ve perhaps had enough of character Geralt of Rivia and his femme fatale entourage amidst the racist, sexist and mumbling charms of the game’s NPC populace. It’s been a wonderful journey of discovery and pleasure to be let loose in world free of restriction and being able to delve as deep as I wanted to go, or skim across the surface of events if they were deemed less interesting. Such is the greatness of the The Witcher 3 which allows novices and experts alike to jump into its welcoming arms without much hindrance.

To begin, there’s the all important difficulty setting which separates too easy for a cinematic story telling experience to something far more challenging for would be vets or those wanting to replay the game again once bested. It’s an easy choice to make out of all that’s on offer, and once the tutorial section is passed one is charged with making a decision to up the ante or leave it were it is. Such is the life of a witcher and the decisions he has to make. 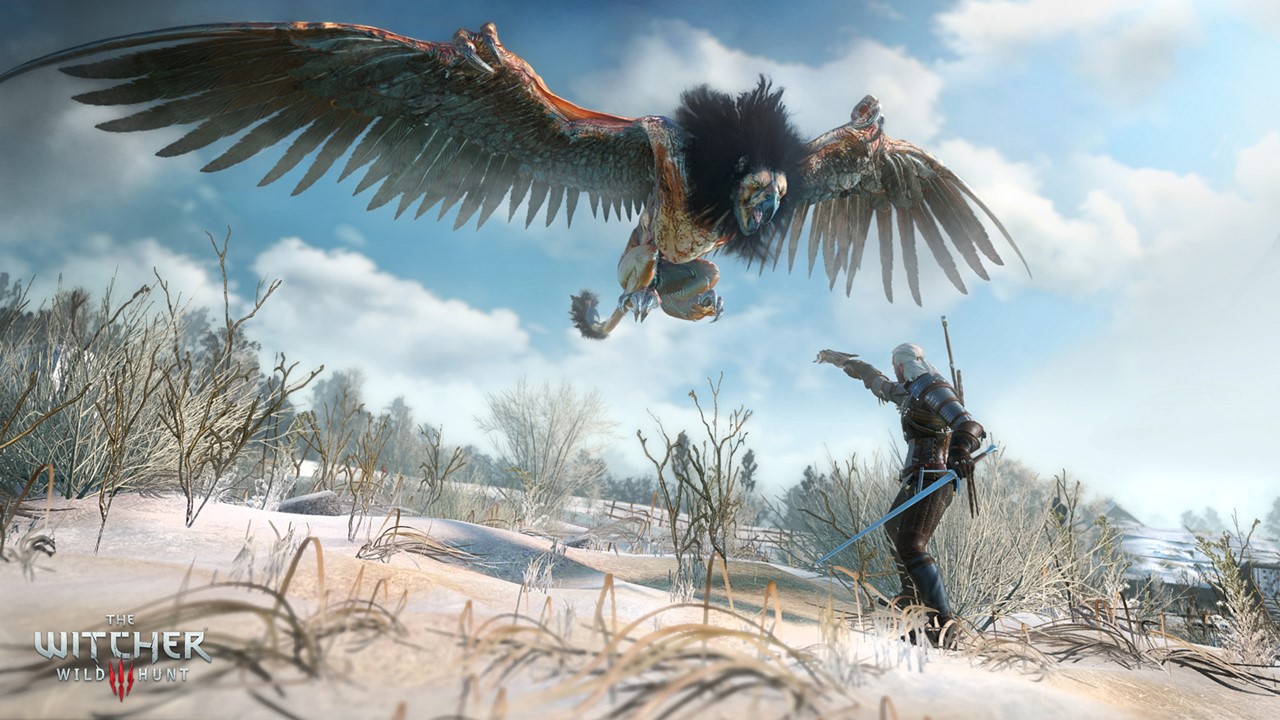 Without going too deeply into the story, The Witcher 3 is a continuation of past glories, although it has to be said, you’ll have a far greater understanding of the familiar faces that appear if you’ve played the previous two games or read up on the deeper side of events through the books the game is based on. However, it’s not a requirement, and to be fair the game provides enough of the basics to make newcomers feel welcomed and not left out in the cold. Players assume the role of Geralt of Rivia, a witcher character who is a special mutated human with superior powers and skills. The role of a witcher is one who can track, maim and kill monsters which roam the lands and cause havoc on the not so innocent populace. It’s essentially the perfect role for a video game character let loose in an expansive open world. Hired by the game’s emperor to seek out his daughter Ciri who happens to be one very significant character due to the elven blood coursing through her veins, Geralt sets off on a journey that would make Batman or Sherlock Holmes feel proud. There’s enough digging here and tracking down various people to uncover more of Ciri’s whereabouts to shake a stick at. Geralt is the medieval detective here and although he has a personal vested interest in Ciri (taking on a father figure type role) the determination has greater ramifications which I won’t spoil for you here.

So, in a nutshell The Witcher 3 has an overarching storyline that can be tackled at will but is surrounded by a plethora of side quests or should I say distractions which pander to the witcher ideal. A witcher is no good if he can’t use those skills he’s honed to help the less fortunate and it appears in this instance they are everywhere. In fact you really have to be an ignorant bastard to shun the pleas of those who litter the game world as side quests, treasure, monster hunts and unknown areas beckon you at every turn, to the point where you’ll often lose track of your ultimate goal having gone off on a tangent for merely speaking to a seemingly innocuous bystander. It has to be said, as side quests go these are the most well thought out and accomplished I’ve seen in a long time to the point where being labelled “side-quest” is a disservice due to how complex they can turn out. It’s obvious a lot of time and energy has been spent on optional activities on offer but does mean if you’re inclined to stray a little you’re not going to be lumbered with something that wasn’t worthwhile. 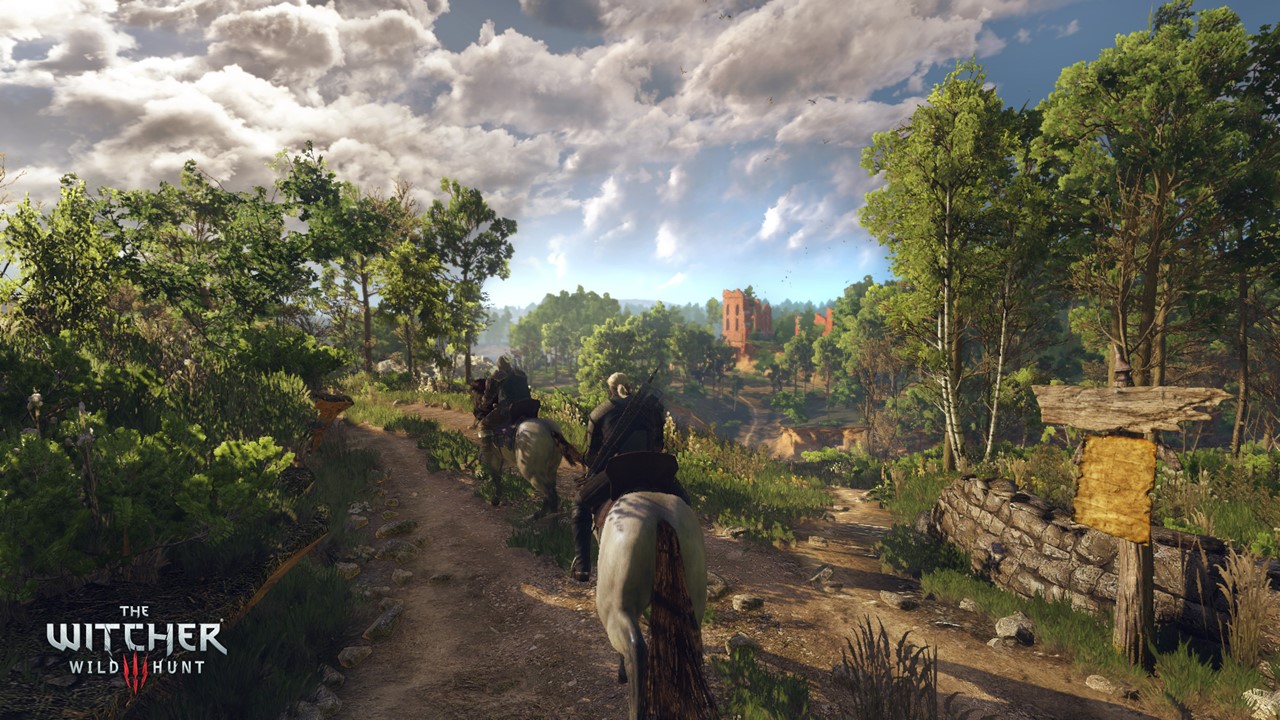 Underlying everything that happens is an RPG skill tree system as Geralt levels up with experience points gained from defeating foes and completing quests. Here players can tailor their witcher build to be proficient with magic attacks or more of a swordsman, even ranged character. There’s a bit of experimentation to be had here using a simple interface and acts as reason enough to take on as many side activities as possible to see how far you can develop the character. Toss in alchemy for making battle hardening potions, crafting of weapons and armor and there’s quite a bit behind the scenes players can get familiar with. Although again, going deep is optional and not a requirement for success on the default difficulty at least. This is another gold star for the game in that players can pick and choose how far they want to go. If you’re not inclined to spend the time in menus then you really don’t have to and can just get on with riding through the world on your horse picking up quests as you go. The handy tracking system also means you will be hard pressed getting lost and fast travel options also pander to the impatient. The Witcher 3 has got every base covered it seems and for this reason alone is what makes the game great.

So, aside from the wide range of voiced characters, dimwits and brazen babes to interact with the game’s combat is something of a hit and miss affair and perhaps is less universal than the rest of the game. Over time, it does get better, but there’s a real lack of fluidity about it even after the 100th battle and beyond. There’s obviously some dice rolling going on behind the scenes as sword strikes seemingly hit with no effect but what is most jarring is how the movements and locked animations play out making for stiff encounters that don’t empower the player as well as it could. The combat whilst marginally better than the previous games is still the weakest link here in my view, not because it requires a bit more tactical thinking but simply due to its unresponsiveness and execution. Other third person action games simply do a better job in my view and here what’s on offer is course and dare I say a bit behind the times even if it’s manageable once you understand what inputs are expected. 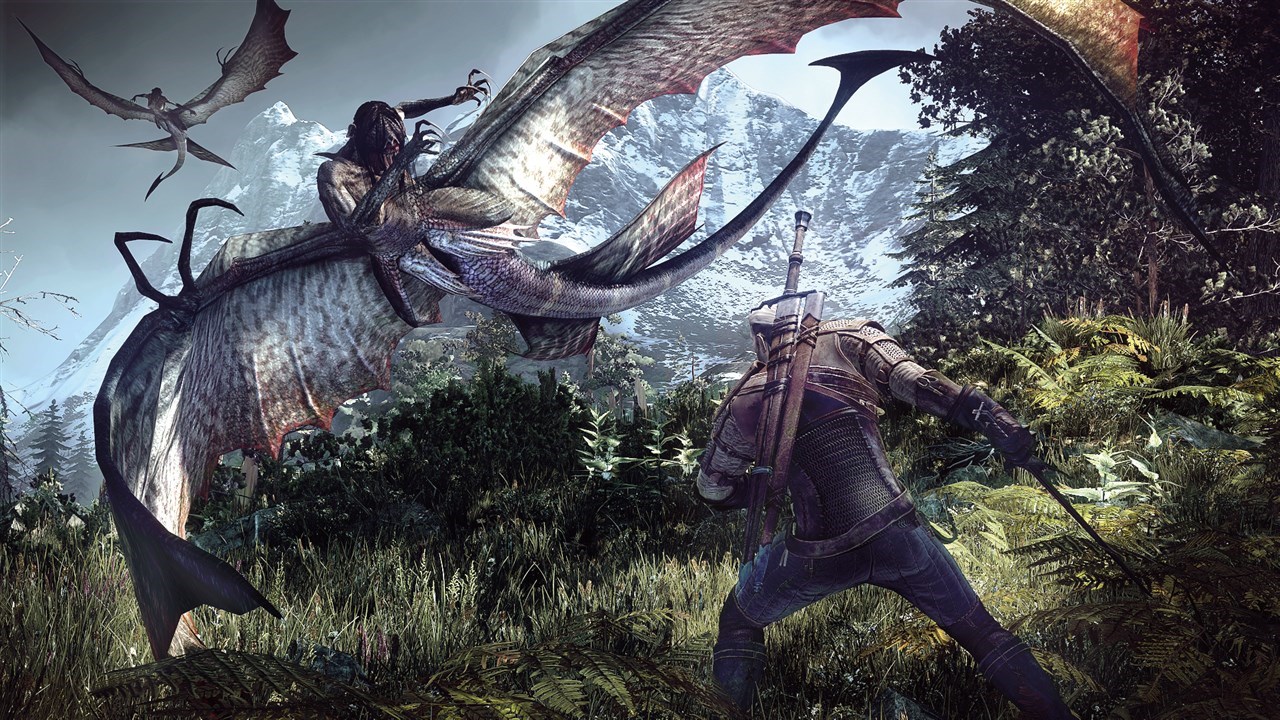 In terms of visuals the game exudes a vibrant and lush open world to explore with fantastic character design and environmental details such as swaying trees in the wild winds, night and day cycles and even a touch of rain here and there. It looks fantastic regardless of the platform being played, although visually the PC version comes out on top with far crisper visuals after a couple of updates separated it from its consoles peers which sport a less sharp looking game overall. Despite the performance issues on either platform, the game offers enough variety to keep players well hooked and engaged with the leading characters and NPC population – although if there’s any complaint is seeing the same faces being used for different characters which becomes more apparent the further into the story you go. The leading cast though are unique and well detailed offering some excellent facial expressions and animations when in conversation.

Audio is also of a high quality with a fantastic soundtrack and top quality voice acting. However, it’s the script that has to be praised as Geralt’s lines and choices he can make come across deliberately wooden, sullen and often sarcastic at the best of times. There’s a distinct level of dark humour on offer here which certainly brought plentiful smiles to my face during the most unexpected of scenes. It’s not only reserved for Geralt either, as there’s an abundance of spot effects used whilst walking about the populated areas that peak the interest and point to a lot of time and energy put in to making the audio feel as accomplished as the visuals. 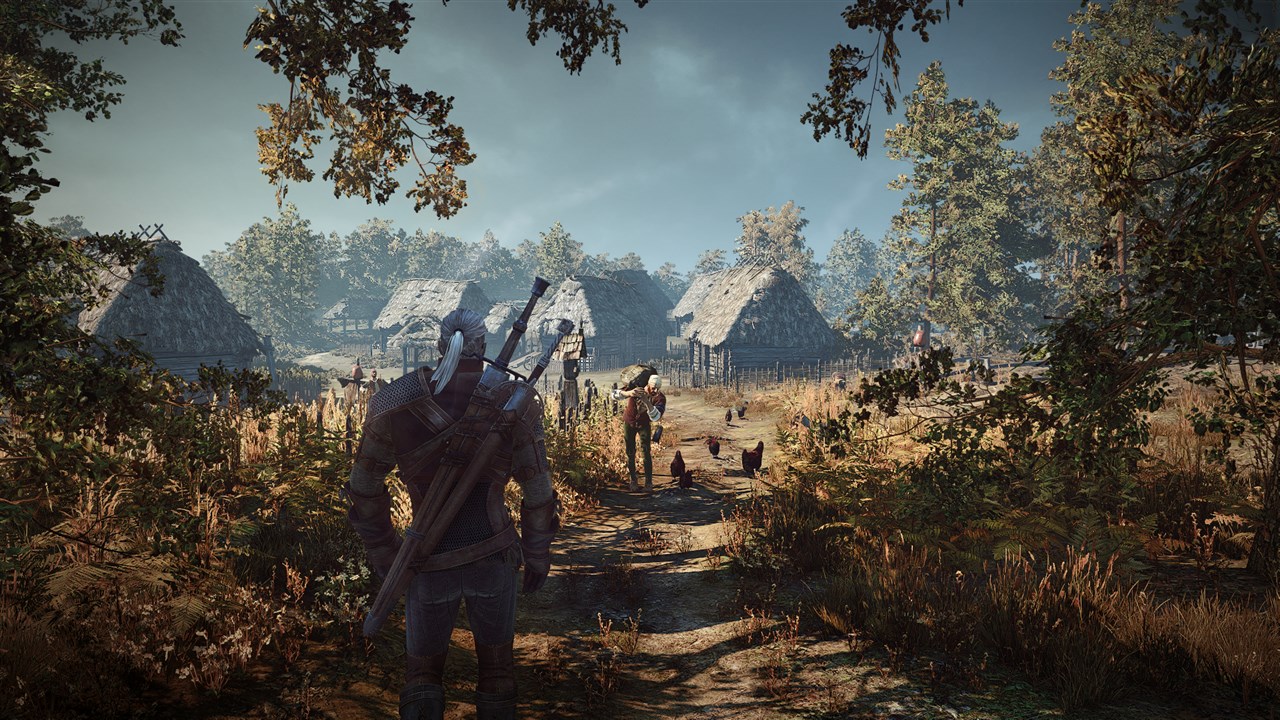 The Witcher 3 is a long game, and not something to race through with the aim of finishing the story as quickly as possible. Taking one’s time and exploring the lands is recommended and means you’ll easily sink days and weeks into the experience depending on how many hours a day you can spare and how thorough you want to be. For its price, you’ll get your monies worth and then some and that’s just with the core game as it is. For those wanting to take things further, there’s no new game plus unfortunately but starting over for a different ending or finishing off quests once the main credits roll means there’s still much more for the witcher to do post ending.

The Witcher 3 Wild Hunt is an impressive game and perhaps raises the bar for other role playing games of this generation. It’s clear CD Projekt Red have passionately spent the time crafting a game that can be player by anyone and have left no stone unturned in terms of RPG features. As a story and adventure, the game can’t be faulted where Geralt’s exploits remain interesting throughout thanks to some excellent secondary characters and game design. As mentioned, the only criticism is with the combat, but even this negative cannot fully depreciate the value of what’s on offer here as an overall experience to be savoured and enjoyed. The Witcher 3 is very much a must have game although the only caveat is having enough time to play it as it’s certainly a game that rewards those who fully invest rather than dip their toes in on occasion.