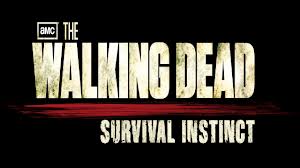 We take a look at Terminal Reality’s zombie entry on Xbox and see how it fares, even with a big name brand behind it. The Walking Dead Survival Instinct is out now, but before you rush out and purchase, take a look at our video review and perhaps think again.

Today we’re taking a look at the Terminal Reality developed first person adventure game, The Walking Dead: Survival Instinct. Based on the popular TV series and not to be confused with TellTale games’ point and click adventure, Survival Instinct is a prequel to the events of the TV show and is based on the comics. The game is set in Georgia and follows the actions of the character Daryl and Merle Dixon who are bikers caught up in all the zombie madness.

From the offset, the game throws players into a tutorial which highlights the basics of the gameplay which revolves squarely around sneaking past zombies, or sneaking behind them to perform one hit stealth take downs – something you’ll be doing a lot of – and finding items to progress the story. Aside from sneaking, players can get into scrapes with groups of zombies and it’s here were players can attempt to run away, or stand ground and fight using melee or firearms such as a pistol, shotgun or rifle. There’s even grenades thrown in for good measure, and items which cause distractions. For the most part, the game is more stealth based as often or not, getting attacked by more than one zombie is likely to result in death. A rather silly mini game can sometimes get you out of trouble as you painstakingly trying and stab zombies in the head in succession, but when overwhelmed, this simply delays the inevitable – so the idea is to move slowly, stealth kill zombies from behind, not use any guns as these attract more zombies, and collect things like fuel and car parts so you can move to the next location.

In a nutshell, it becomes pretty dull after an hour or so play where effectively, you’re repeating the same menial survival tasks over and over with little variation. Throughout your travels, you’ll come across survivors who might task you with an side objective, and once complete, might even join you on your journey. However, your vehicle can’t house too many passengers and so there’s a little bit of management thrown in. Savvy gamers will look at the extras tab on the main menu to see which passengers offer the best rewards once the game is completed and make a point of leaving behind those who don’t fit in. Prior to  the driving sections (which are handled via a non interactive scene) players are asked to choose a route, and then determine whether to stick to the highways, the streets or the off roads. Each choice offers the chance for supply stop offs en route, with the highways being less favourable for supply stop offs, and risky for car breakdowns. Basically, players stop off at various points on the journey to gather more fuel, or parts and supplies. The whole process is simply repeated for the entire game. When players eventually reach their destination, they can then send any passengers off to forage for food, fuel and other items. They can be equipped with weapons and have their health topped up to increase their success rate, also bearing in mind their preferences whether that be blunt weapons, or stealth.

Survival Instinct is pretty dull in terms of graphics where most of the environments look the same and offer little variation especially in the inhabited areas. The zombie AI is a little off, and generally the game looks like a budget offering with no real bells and whistles. Compared to some of the other games making strides at the moment, the game simply looks and feels dated with no expense spared in giving it some detail. There’s too much to dislike, such as invisible walls, not being able to enter rooms due to a small objects blocking the path and a distinct lack of believability in the samey  looking environments.

Audio is also pretty tame with expected performances from the zombies and the main cast. There’s some ambient sound effects and some music, but nothing that captures the imagination. Like the rest of the game it’s all rather dull.

If you have the patience to plough through the game the first time, then replaying allows players to take different routes, collect different passengers  and unlock their relics once the game is completed. These are added bonuses which can up the odds on subsequent plays.

The Walking Dead Survival Instinct is a rather poor attempt at a zombie game which has some neat ideas but simply degenerates into a snooze fest due to a lack of ambition and overall polish. It’s far too repetitive, although there is some tension created when sneaking around which might please some gamers. The game never really excels in any particular area and as it’s a survival game, simply ends up not being as fun as it could have been. Some fans might get enjoyment from what’s on offer, but anyone else might feel it a wasted purchase.