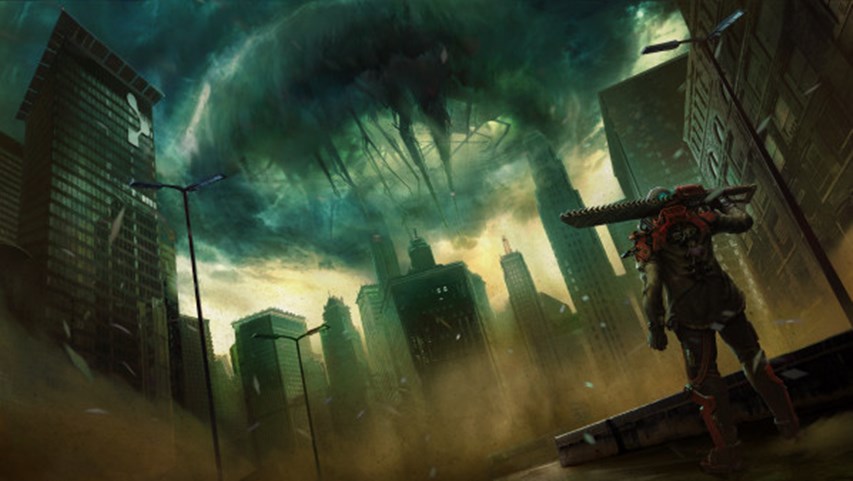 Deck 13 returns with their sci-fi themed The Surge 2 which follows on from the 2017 first game. Set within the fictitious post-apocalyptic city of Jericho, players assume the role of either a male or female escaped prisoner following a mysterious plane crash into the city which leaves our hero with no recollection of past events. The city plays host to a free-for-all mentality where it’s every person for themselves and a good excuse to kick serious tail.

The Surge 2’s story perhaps isn’t a strong point or a driving force in the game. Sure, you’ll come across various people who offer quests and enlightenment as you progress deeper into the city, but the reality rests with exploring each district at leisure. Once you’ve decided on character looks (which you’ll see during conversations or menus) you’re pretty much free to explore. However, you will generally come to a halt by the difficulty of the opposition.

Starting off in a prison then, the enemies offer weak-resistance including the first taster boss character – (although you might actually die during this encounter). The enemies appear unarmoured to match your own status making them easy fodder for the horizontal or vertical attacks on offer. As a unique combat feature, players target head, arms, legs or body making for a tactical approach to encounters. Obviously an exposed head will lose energy quicker than an armoured body part. Holding down either attack button charges up the attack which is handy for breaking tougher parts such as shields. It’s hardly very original but works all the same.

As a gameplay hook, the idea is players target specific body parts to aid in levelling up their own gear from the subsequent loot-drop, or gain a new weapon or armour piece to construct. It’s a interesting loop which does have some merit making it less random than simple random loot drops. The customization offers players the chance to choose a weapon and armour combo that suits their play style. You want a quick but weak build, then that’s an option. You want a slower but tougher tank, that’s easily accomplished too. A few hours in and it’s clear players take Jericho at their own pace and farm areas for tech points (the game’s main currency), level-up their character and push ever-forwards when the time-is-right. It’s refreshing to move forwards without any particular pace.

Combat is visceral with the choice of storing energy via batteries to help recoup health, lopping-off body parts for extra items or just bullying your way through because you can. The health system might be divisive for some players where you gain energy from attacks which once a battery fills, you either use immediately as a health top-up, or store for later use. As you upgrade the character more batteries become available and additional health charges to use in combat. This does make the game somewhat easier. Through the choice of which load-out you use (you have the option of three) you can ignore implants which offer these boons for a tougher challenge.

This review wouldn’t be complete without a mention of the Dark Souls series of which this game borrows heavily from. Your tech-points drop if you fall to the wayside during combat. However, from the last medical point (bonfire) you have a time limit to retrieve the lost points. The medical points also serve as the only area to spend said points and tinker with all the upgrading and construction of parts. As with Dark Souls, each time you activate the medical point all the enemies respawn the area.

Going back to the combat and later bosses and it becomes apparent that the game isn’t all plain-sailing. Probably what is most irksome are the status effects enemies employ further into the story. Aside from plentiful stage hazards, enemies will hit with attacks that disable all your moves for example. Frustrating is perhaps an understatement. Whilst you’re able to dodge and counter-attack it’s not always possible when it’s a three or more versus one encounter. Interestingly some attacks don’t seem to phase enemies at crucial moments allowing them to rain down attacks on you mid combo. Then there are other times when enemies will super-lock on to you regardless of how well you time your dodging. It all seems a bit like AI cheating, made even more frustrating when bosses use the same tactics. Expect to die cheaply and often which is a shame. User error and dying is fair-play but being on the receiving end of cheap isn’t fun at all.

In terms of visuals, Jericho city offers some colourful moments amongst all the drab and dreary. It’s certainly visually more appealing than the first game although that might be subjective. However, the game offers the post-apocalyptic industrial setting in spades and doesn’t shy away from that much. Whilst the city is easier to navigate and offers handy pointers as to where to go next it’s still a maze of specific colour pallets. It works well in context but isn’t the prettiest game on the eyes. Enemies come in various forms and look good throughout. There is a genuine distinction between the lowly and hardened wanderers. Audio comes across somewhat muted though favouring action-based sound effects rather than a raging soundtrack blasting out. What little voice acting there is, rests on the side of functional rather than outstanding.

Players can expect to rack-up many hours playing the game, dying often, upgrading their character and searching through all the nooks. Once bested a new game plus option reveals itself to get more bang-for-your-buck. However, the long-haul isn’t going to appeal to all types of gamer.

The Surge 2 is a likeable game despite some oddities with its cheating AI and lack of diversity with its locations. Once you get a feel for its combat beats, it’s a fun game that keeps you coming back for more. Gamers honed on hack-n-slash type experiences will probably find this too-focused and unforgiving to be appealing. Souls-like fans might enjoy what is on offer here despite the way some actions are perhaps too easy in one-direction and too-tough in the other. Either way, if you can reside somewhere in the middle of these elements you’ll find an enjoyable post-apocalyptic romp.