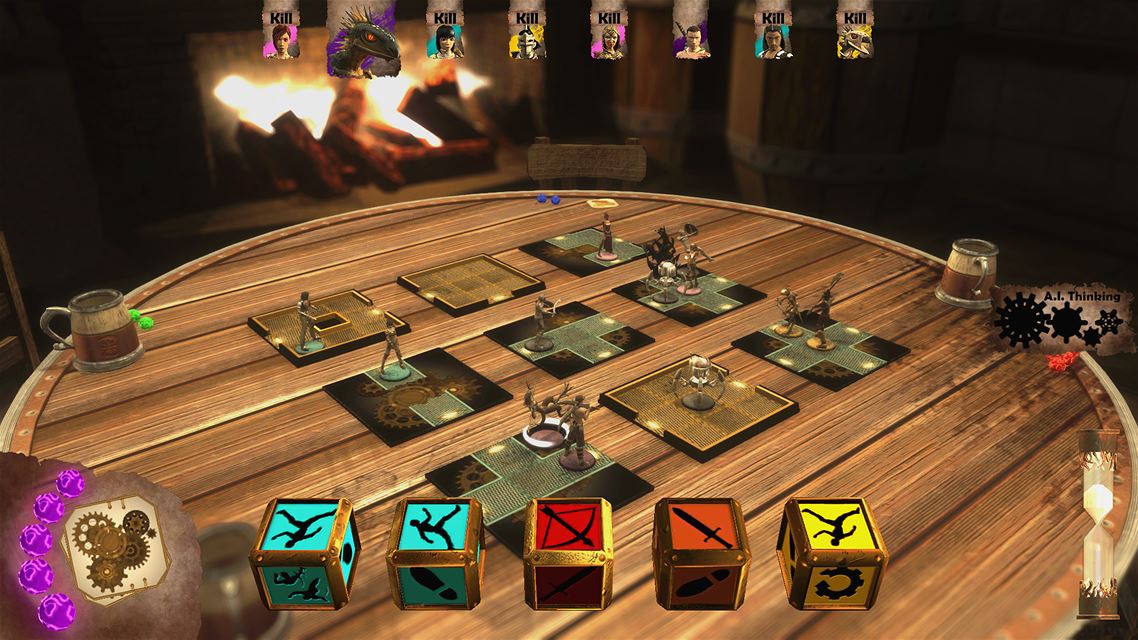 Table top games aren’t readily available across the board for Xbox and with the scarce amount that have made it to the console there is an even more limited amount that have been worth playing with a controller. Radiationburn hopes to change that by combining a dice rolling table top game with a dungeon crawling adventure for gamers to test their strategic proficiency. Can this newcomer compete for your time against the myriad of other titles in the marketplace or is it just a waste of time? 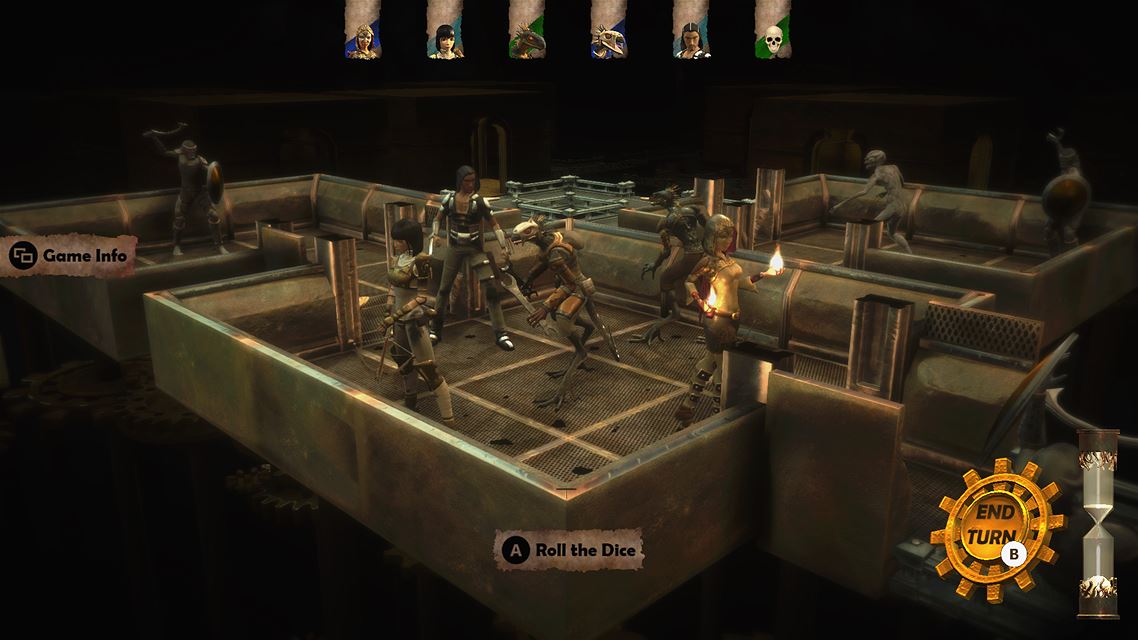 The Living Dungeon has an ever changing world filled with traps, monsters, and conniving players. There are 9 tiles that fill the playing field and each consists of 3×3 grids that can be viewed as floating over an abyss in the dungeon or a tavern view that has it sitting on top of table. Players are tasked with killing the opposition or reach the exit to win the game. Sounds simple, but the game relies on cunning, strategy, and a little bit of luck with the roll of the die.

Gameplay is turn-based and has the player roll 5 dice that will be used to perform the basics needed to traverse the board and battle adversaries trying to stop you. There are the fundamental moves like walking a space or running across a few, but the game also mixes in die that allow you to dodge, change places with an opponent, and attack at close range or from afar. Doesn’t sound like anything special until you throw in a key component of the Living Dungeon, the ability to rotate or flip one of the 9 tiles that make the rooms. By doing this you have a chance to leave enemies suspended over the abyss or left inside a wall where they will perish at the end of your turn, but this works both ways so be careful you are not the one left without a tile to stand upon. Players essentially have to stay on their toes at all times and plan out each die to work to their benefit and their foes demise.

There are 2 basic game modes in The Living Dungeon that allow the player to either pit themselves against the AI in the single player campaign or a multiplayer mode that allows you to test your wits against real flesh and blood opponents. The story mode is where you get a feel of the gameplay and learn the in’s and out’s of how each roll of the dice ultimately holds your fate. The Living Dungeon actually has a pretty deep back story for a table top inspired game and as you progress through the levels you’ll be introduced to key characters you’ll play as with their own specific skill sets that allow you attack and move in new ways. Eventually you learn that a malevolent being called “The Darkness” or The Dungeon Master is trying to stop you from ever leaving the dungeon by twisting the set rules in its favor. It can spawn a plethora of monsters and manipulate the rooms in ways the player cannot giving you just one more reason to hate the computer.

Even though there seems to be a fleshed out story it doesn’t really flow well as you proceed to the “end game.” In between levels the narrative is told through rudimentary hand-drawn stills and terrible voice acting that will make you wonder why Radiationburn didn’t add a little more polish to both visuals (in-game and cut scenes) and audio. 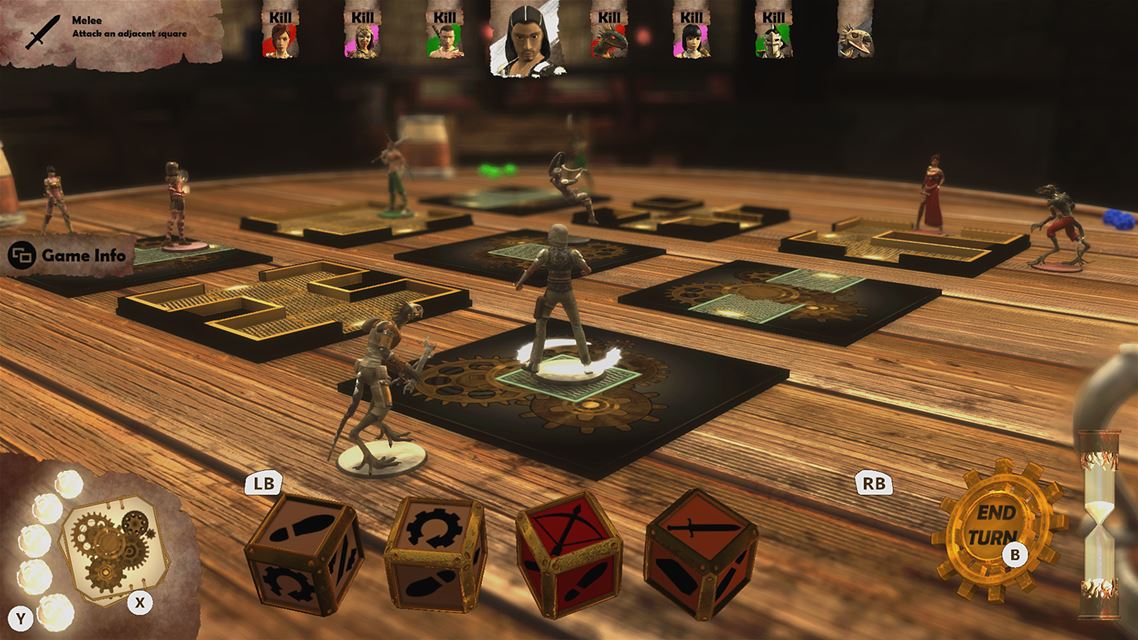 While the game boasts “multiplayer” it is actually only available at the time for local multiplayer with up to 9 players. There is a nice mix of game modes to choose from, but if you’re like the rest of the world your time with friends and videogames comes in the online form. The developer is working on the addition of online capabilities and this is the only way to help the game generate a following to keep the players coming back to test their skills against human opponents. Hopefully this comes sooner than later because the single player becomes stale after finishing the skimpy campaign. 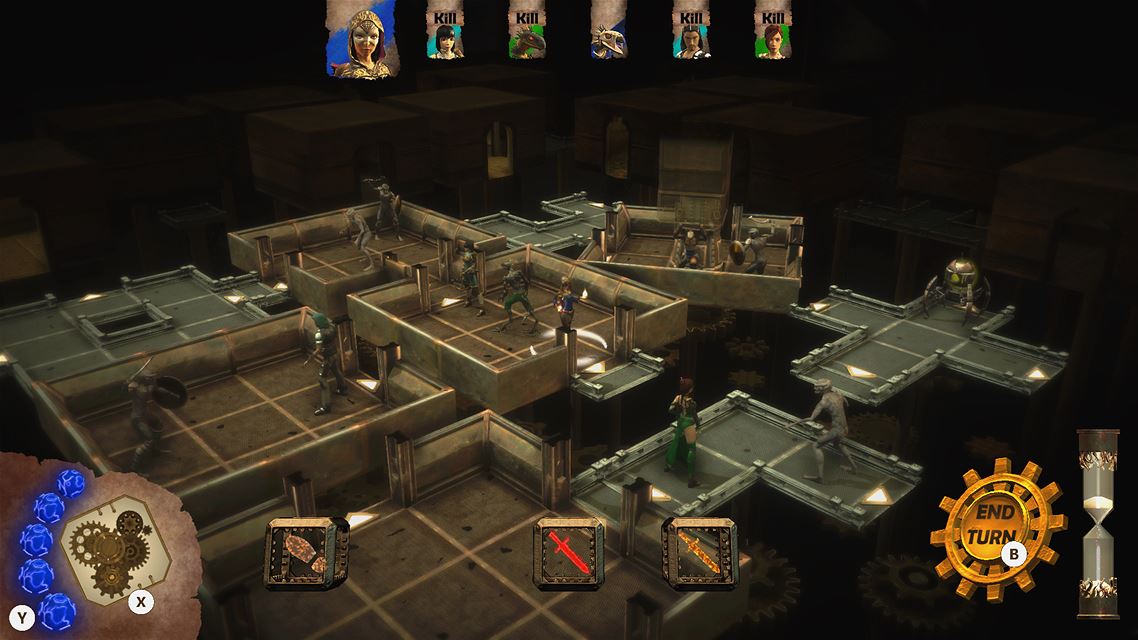 Radiationburn showed a lot of potential with The Living Dungeon and with a few minor tweaks they could have had a cult following like Catan or Carcassone did back in the day. While I loved the strategy and chance the gameplay offered the actual lack of content left me thirsting for more than what the game had to offer. The single player campaign was a great tutorial and introduction to characters , but it really felt repetitive towards the end and didn’t have the polish so many other games that flood the market do. If you have a roommate, friends who come over regularly to game, or are a family of gamers in one house then this will definitely appeal to you, but if you were looking for something with online capabilities you may want to steer towards something that is offering what you’re looking for at the moment.