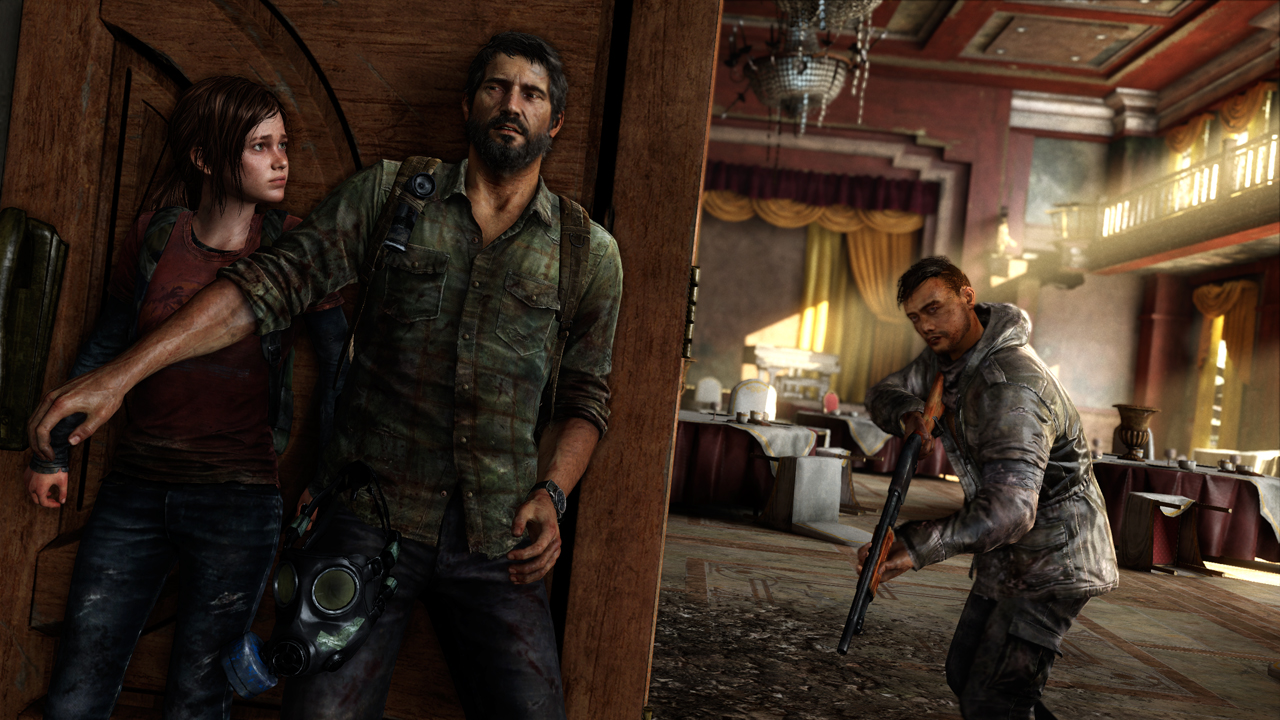 Naughty Dog’s eagerly awaited viral outbreak game The Last of Us is finally in the hands of gamers, telling the tale of viral outbreak survivors Joel and Ellie as they cross hazardous planes through the wreckage of a destroyed Boston. There’s a decent story on offer, not that it travels far, and some excellent stealth based gameplay all wrapped up with some tangible interplay with the NPC Ellie as the duo navigate lateral puzzles and take on the human and infected hordes.

At its core, The Last of of Us offers a comprehensive and well married coupling of survival horror gameplay elements with stealth gameplay. For those expecting to bring out the shotguns on plentiful hordes will be disappointed. It’s not that type of game, as it commands methodical and well timed movements through the dimly lit interiors and fully exposed daylight areas. Whilst the path is perhaps a little too linear, there are moments to look around every nook and cranny for items which can be used to craft weapons and health packs. The slow pace of the game, and the fact that most often Joel is with up to two AI companions draws players into a most dangerous environment. The AI adds a group aspect to the game which is exercised during combat, and the scripted moments where navigating a puzzle is a requirement – and boy do you feel every moment no matter how slow the execution. The AI on occasion do get in the way, but never blow your cover which is handy, but does take you out of the game a little when their presence is more in spirit than flesh. That said, the AI can and does save the player throughout the game in perhaps non scripted moments. Their power and aim is naturally reduced to keep the pressure on the player, but at times it’s the one crucial bullet that gets Joel out of a scrape. Death isn’t so bad considering the rather generous checkpoints at times, although the slow pace and having to restart entire areas does make for a painfully slow process depending on where you restart.

The Last of Us does feature its fare share of weapons, which range from simple sticks for up close encounters, and rifles and pistols for longer ranged attacks which works well with the auto cover system. Not that the onus is on shooting. The idea – which works perfectly here – is the fine balance between playing stealthy, and only using the limited supply of ammo as back up. There are scripted moments where weapons have to be used, but it’s nice to know that there’s no punishment for being brutal and killing a few opponents when needed. This isn’t a game for pacifists, although purists can lessen the death toll if they’re sneaky enough.

The game’s story meanders around a central theme of transportation and survival. It’s a continuous journey to strive for completion, yet along the way, the bond between Ellie and Joel grows to the point where there’s a genuine feeling of camaraderie with the two characters. The plot itself remains consistent but lacking any real depths, but the characterization is top quality and makes the pre-rendered cut scenes more palatable and welcome breaks from the sheer moments of tension that shroud the gameplay.

Graphically, the game sports some excellent visuals of a fallen city, with the remnants of normal life still evident and yet so far away from where our travelers are.  There are some muddy textures in some instances and dips in frames, and most notably the player models are lacking clarity during gameplay – especially when compared to their in-engine pre rendered versions. That said, the faults cannot overshadow what is essentially a fantastic looking game overflowing with moodiness and contrast between light and dark.

Audio is equally of a high standard with all performances being of a exceptionally high standard. The game’s use of pocketed sound adds to the tension, and music only kicks in when needed. There’s a very realistic flavour to the audio which comes as a pleasant surprise, especially when many games tend to over saturate the audio spectrum with music and sound effects.

The Last of Us single player story will take some hours to best, and then there’s the challenge of hunting down all the collectibles or upping the difficulty, to the brutally challenging survivor difficulty. Players can also take the battles online and play various game modes with their avatar for hours of endless entertainment. However, the reality is, the game’s single player offering is the main event here.

In closing The Last of US proves that stealth and survival horror games can work well together, despite a few niggles here and there which can be easily overlooked. If you’re a fan of stealth, then this is definitely worth adding to the collection – although there is a lot of fluff to get through if one is less inclined to follow the story and just play.  For fans of survival horror there’s a genuinely tense and thrilling offering here that keeps some of the old school mechanics and brings them into the here and now with ease of use and non intrusive management. The last of Us therefore is a must play game for the PS3 and a testament that Naughty Dog are more than the Uncharted series.