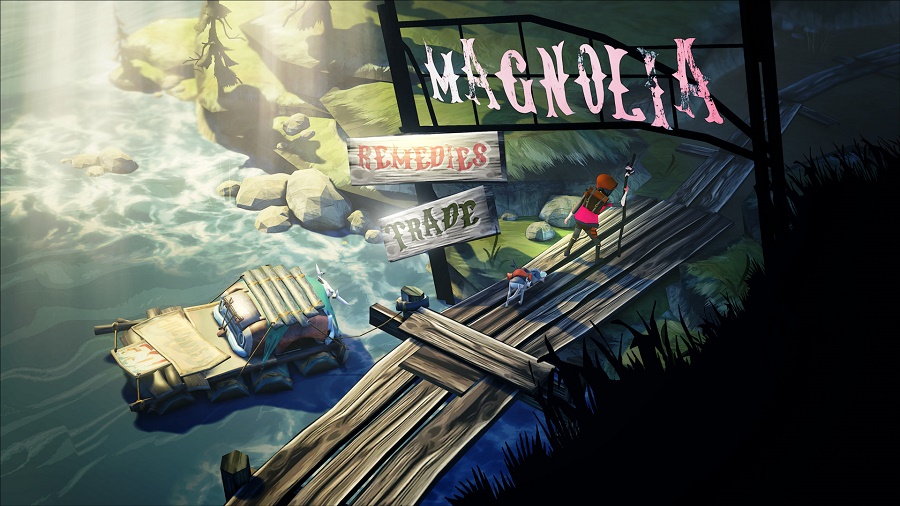 The Molasses Flood released its rogue like survival game The Flame in the Flood on consoles and PC and whilst it’s a colourful, vibrant looking game it joins a long stream of similar survival games which have become quite popular over the last few years. Aside from the rather fantastic visuals and an new twist where players have to travel down a hazardous river is this worth checking out?

In a nutshell, you play as a female survivor cum explorer and her canine companion who are washed up after some serious flooding. Humanity has seemingly gone to pot and it’s just you and the elements battling it out for survival. What this means is you’ve got to keep on top of the character’s hunger levels by grabbing food from whatever you can, drink plenty of “clean” water – yes there’s lots of it about but as you are aware, drinking dirty water can have a detrimental effect on one’s health. Then there’s the overall well being of the character in relation to body temperature and any injuries sustained from wild animal attacks or microscopic bugs which can put an end to your survival if lacking antibiotics for example. There’s a lot to think about as you would expect but it’s pretty easily digestible as the game provides various collectible items which have a purpose or can be crafted to create new items.

It’s a comprehensive system with plenty to ponder as you spend your days and nights searching for new items in themed sections or making headway down river in your rickety raft (which can also be upgraded/repaired if you find the right parts). There’s a neat balance here of deciding where to go as often you’ll have to make a choice based on what essential items you need. Each themed area has specific items so it’s easy making the choice once you’re familiar with the game’s system. 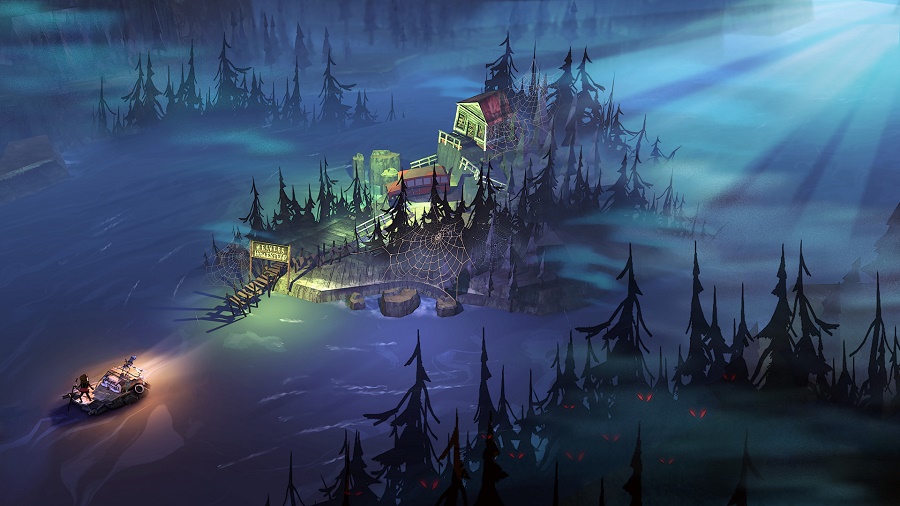 The Flame in the Flood is not an easy game with its story mode which offers objective based play and the endless mode which has you survive for as long as possible. Often it seems the game deliberately sets you up for a quick death no matter how well prepared you might think you are. For example, you might be suffering from the cold and not able to craft new clothing so you set up a fire to warm up your character as the next and only thing left to do in the absence of no building to sleep in. However, just as you settle down to your cosy fire and see the warmth meter rise, the game decides it’s going to chuck it down with rain which extinguishes the fire. In your desperation you venture further into the wilderness to find shelter only to be attacked by a wolf and horribly killed from the injuries. Yeah that’s really fair isn’t it and this is not long into the game. In fact, the wild animals are pretty overpowered and even if you can craft defensive measures they attack and gang up on you relentlessly making for dangerous foes. The quick item selection menu is way too problematic/fiddly to use in the heat of escape, so whilst it’s a nice idea to stop you going to the menu and get savagely attacked, you can watch yourself get scratched and clawed fumbling with the selection. The reality is, it’s often better to just run away as soon as you hear or see any wild beasts, but sadly this isn’t always possible when it’s too late. BAM! Broken bones and lacerations and nothing to use to heal. Cue a slow and painful death…again. It’s a rogue-like game so these moments are to be expected but it still hurts when you’re making headway only to have your plans scuppered by a rogue wild boar who’d rather run you down than avoid human contact. 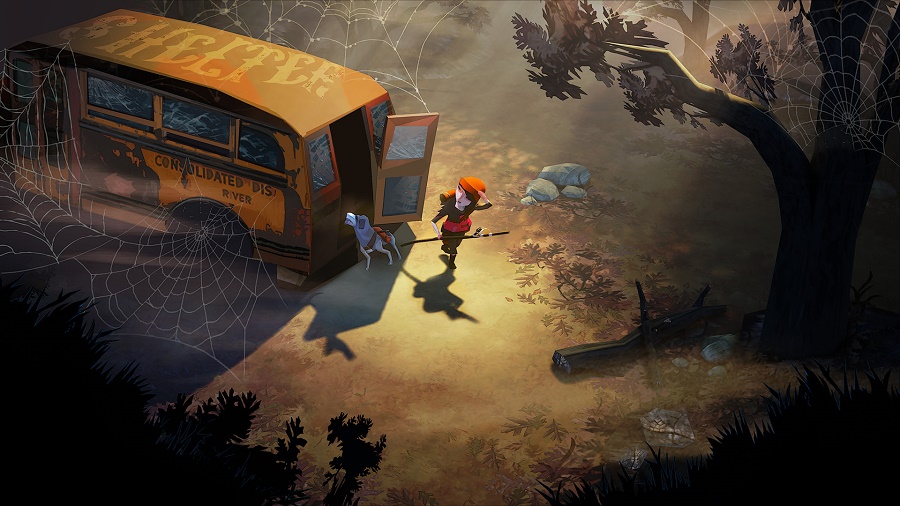 The game does look great with its simplistic animated visuals and impressive lighting and shadow effects. You can’t fault the ambient sounds and often cheerful but pensive sound track which accompanies you every step of the way. It’s a lovely looking game and draws you in with its colour and artistic creativity.

Gamers will get quite a bit of time out of the two modes and because of the rogue-like nature no two games play the same so you’ve got bags of replay value here amongst some difficulty modifiers if that’s your calling. For £15.99 it’s worth the asking price although be warned if you’re not into making progress and then getting killed in a seemingly cheap way then this might cause some frustration – there are checkpoints in the story mode though if you can reach them before an untimely demise. 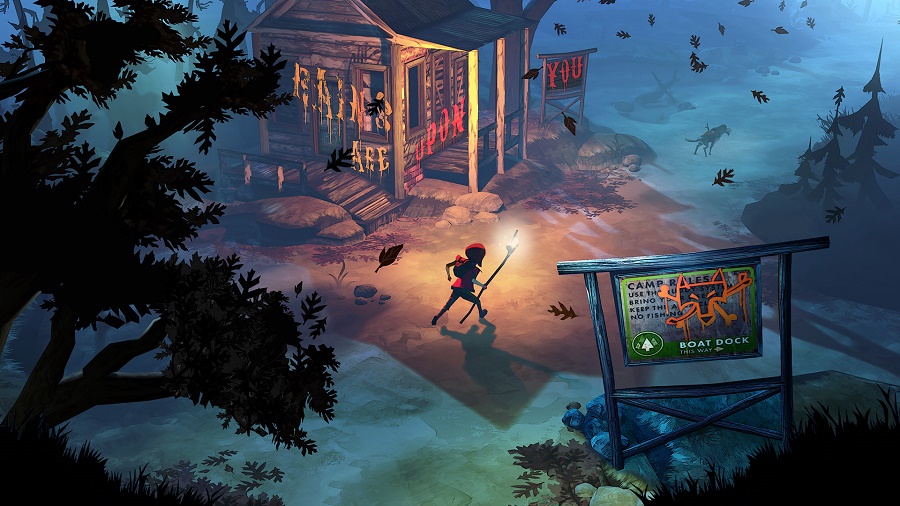 The Flame in the Flood offers a neat take on the survival genre with its white water rafting and item management. There’s a neat sense of adventure every time you start the game. However, it’s not an easy ride and with some unforgiving elements to contend with makes it quite the challenge – which for some is actually what’s needed. Sadly there’s no softly softly approach for newcomers and this means you learn how to play the hard way. If you’ve got the patience to endure then you’ll likely get well hooked on such a cool game. If not, then you’ll probably delete it from your storage never to see the light of day again after so many hours time investment. Yes, The Flame in the Flood is one of those divisive games you’ll either get right away or refuse to be overcome by its undulating challenge.