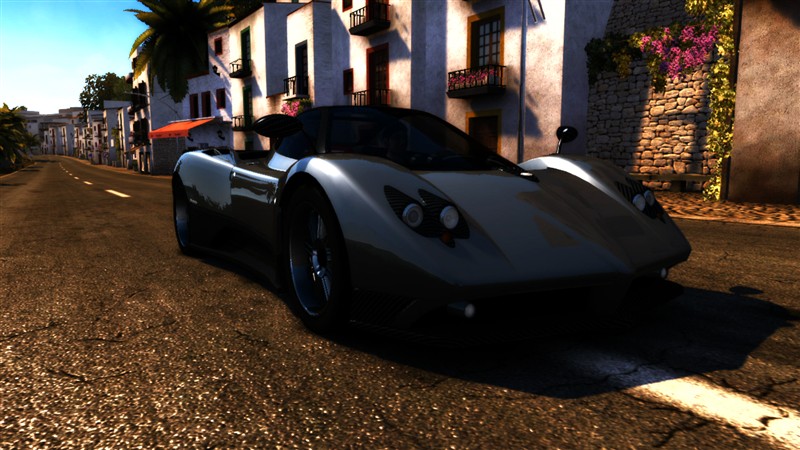 The original Test Drive Unlimited was a breath of fresh air, offering its own take on the racing driving genre. With its open world flavour and jump in and out multiplayer despite some niggling issues was a very good game but simply falling short against games like PGR 4 and Burnout Paradise which offered similar thrills. Cue 2011 and to start the year Eden Games’ racer has hit the shelves and is ready for more open world action. The question is, has Eden fixed the flaws and fleshed out the gameplay, and more importantly do the changes work well enough within the framework of the open world idea.

Featuring two islands to drive around and adding the diversity of off-road driving and you’ve got some neat tweaks right from the start. The game begins with you creating an avatar, the person that’s you in the TDU 2 (Test Drive Unlimited 2) world. You can choose from a variety of skins, and more importantly later in the game head to a plastic surgeon and properly rearrange you face to your liking. There’s a storyline this time as your character wakes up from a dream and realises the best way to move up in the world and adopt the lavish lifestyle of the rich and famous is to win races. It’s a good motivation if ever there was one, and after taking some tests to gain licences, you’re ready to start racing.

You’ll be introduced to the cast of other racers on the circuit via cut scene when you grab those licences and before and after races. There’s some personality here but not really enough to offer any sort of interesting distraction. In some ways, the story can jar into the meat of the gameplay, sometimes slowing down the pace when you want to get cracking on, but this is a minor quibble. So, you’ll endure silly arguments, a bit of gloating and some predictable scenes throughout the structure of gaining the relevant licence, entering a championship restricted to the class denoted by the licence you just earned, and so on, until you’ve conquered all and earned a fat pay cheque along the way. It’s a simple progression path but to add a bit of expansion to the core gameplay there are plenty of distractions on offer.

There’s an underlying theme with your character and although money is a big part of the motive in terms of the story, for the gamer, there’s a levelling up system where you can increase your fame in the game world. There are four areas to level up in which relate to winning championships, exploring the two islands (Ibiza and Hawaii), and their own set of challenges as you cruise the roads, purchasing cars and other goods, and interacting with the online community. The latter cannot be levelled up for those playing offline. There’s a global tally with a cap of 60, but as mentioned, offline players will fall short of that. There’s a lot to do to get the 15 points in each category and so expect to do a lot of driving around.

The driving mechanic does seemed to be improved from the original game and sits in the middle of arcade and simulation. There are some annoyances though, but these stem from the race structures more than anything. To expand, there’s some tight races to navigate and depending on luck sometimes you’ll find that one mistake can cost you the race and force a restart. Perhaps this is the way it should be because that’s how it works in real life – minus the restart – however, in a game it can become a bit too punishing and to a point, frustrating. The problem lies in the length of some races and the unpredictability kicking in. Being nudged off the track deliberately by the AI can tend to grate especially when the competition is already fierce. clipping a solid bush during a time trial and then spinning widely out of control can also become frustrating. The controls could have been a bit tighter, especially at the faster speeds, where they become a bit too floaty making crashing very much a reality.

There are some good moments amongst the niggles though, where a great sense of speed is realised during racing, often being exhilarating when weaving past the regular traffic. There’s some interesting environments to drive through which dynamically change as you drive, night turns to day and sunshine turns to rain, creating a sense of being in a real world and also changing the challenges you partake in. There’s a sense of satisfaction when you’re holding the gold cup in your hands as some of the tasks are pretty tough and thus we have a challenging game.

This is an open world game, so it’s perhaps wrong to expect the same level of detail as more confined racers. That said, TDU 2’s graphics whilst pleasant aren’t perfect and have a number of issues. The most noticeable is the pop in, something which seemingly has been eliminated from many games but appears prevalent here. You’ll see distant objects such as trees suddenly appear into view as you near them and whilst not really game breaking does take away some of the immersion. There are also issues of invisible AI cars blocking you which can prove annoying if racing or doing a timed run. A major annoyance is with your cars at the start of a race sometimes not switching gears when using the Automatic setting, resulting in the AI getting a 3 or more second head start. This is a known bug and one that should hopefully be fixed, but is not good to ship with the finished product considering such an obvious fault should have been fixed prior to release. Finally there’s some frame rate problems where at speed not only does the handling but the steadiness takes a hit. Regardless, the game is highly playable but the frame rate drops do impede on the overall smoothness.

The islands themselves are well crafted featuring a number of differing road types, settlements and stunning vistas to keep you hooked – there are no pedestrians other than AI related to the story and other online players you meet inside the various showrooms etc. Jumping out into the game’s first person view when controlling your avatar showcases a simple ‘The sims’ like [in appearance] world to interact with and adjust to your limited liking. You can buy lots of clothes from various stores, homes from the estate agent and of course the cars to show off in your garages. Whilst the game isn’t amazing graphically, the culmination of its parts makes for an impressive game even if some parts are underwhelming or aren’t as necessary as others. That said, the extras all fit in nicely within the open world nature on offer, providing a constant stream of items to obtain.

The audio is reasonable and depending on what your preferences are you’ll be hearing an abundance of quality engine sounds, a bit of ambience or the thumping dance or rock radio stations on offer. It’s a shame there are only two stations which seems limited compared to other open world games, but as always the option to mute or use your own is a good one, especially if you’re sinking many hours in. The voice acting for the characters is a bit flat and you’ll probably not warm to any of them including your own. You’ll often hear the bleating of the wandering as part of the numerous timed side driving missions you can optionally partake in and several missions later they still don’t ever ignite any passions especially when told, “you’re a cutie.”

For many, the main appeal of the TDU universe is playing in an open playground and teaming up with randoms or friends and collectively have a good time. Well this ideal is back although right now there are a number of components simply not functioning properly and are in the process of being fixed. Anywhere in the game you can bring up the map view and then select local players and jump right to them. It’s here where you can team up and challenge each other or co-op drive about the islands. The interface is easy to use and throughout the island there are numerous online ranked and unranked races to jump into – sadly these are also not working properly at present. You’re able to flash your lights at any passing players and enter the same instant challenges presets for competitive play. Beyond this there are car clubs which can be created where a team/clan spirit can be exercised, user created challenges that can created or entered for cash rewards and even friendship forming antics with your avatars should you meet up in any of the buildings that can be explored.

Test Drive Unlimited 2 seems to follow on nicely from its predecessor but despite some new mechanics like the off-roading, feels essentially like the same game. The story is largely forgettable, making its inclusion a bit moot. The driving, whilst improved, is still a bit twitchy overall. The numerous graphical imperfections unfortunately let the game down. When you add a multiplaying component that does not work properly, and you might wonder if this is a game worth recommending. Issues aside there’s a decent driving/ racing game under the surface, and once things are working properly there’s an unmatched level of things to do in a driving game and one that will take many hours of your time. In this regard TDU 2 is good value for money, but comes across as still being a little unpolished in places. In terms of the series, it’s a very small step in a positive direction, but the blemishes on the surface continue to smoulder the game’s potential.