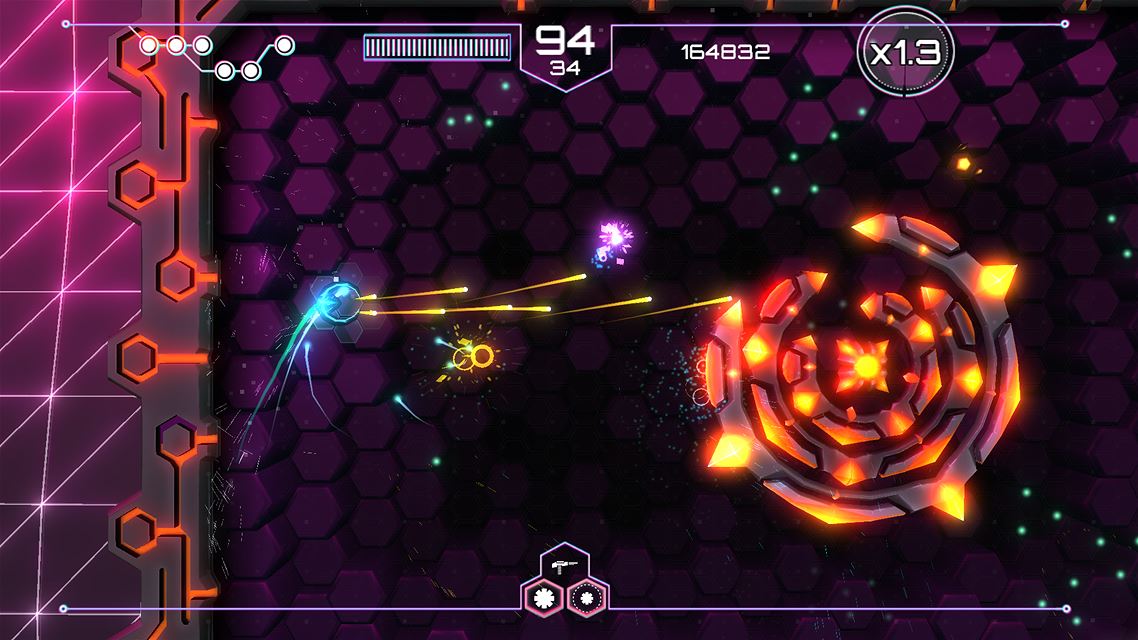 Dual stick shooters used to be a dime a dozen, but with the evolution of video games these games have been few and far between. And if you’re looking for one that is even with your time the search is narrowed substantially. Back when the Xbox 360 was fresh and new I became hooked on Geometry Wars, the simple controls and addicting gameplay sucked away more hours than I’ve spent binge watching Netflix. Since then there have been a few decent dual stick shooters, but there is a definite drought on the Xbox One. Fortunately Eclipse Games has brought forth Tachyon Project for those in need of a little dual stick fix, but does this really stack up to be a worthy purchase or is it just a waste of time and money? 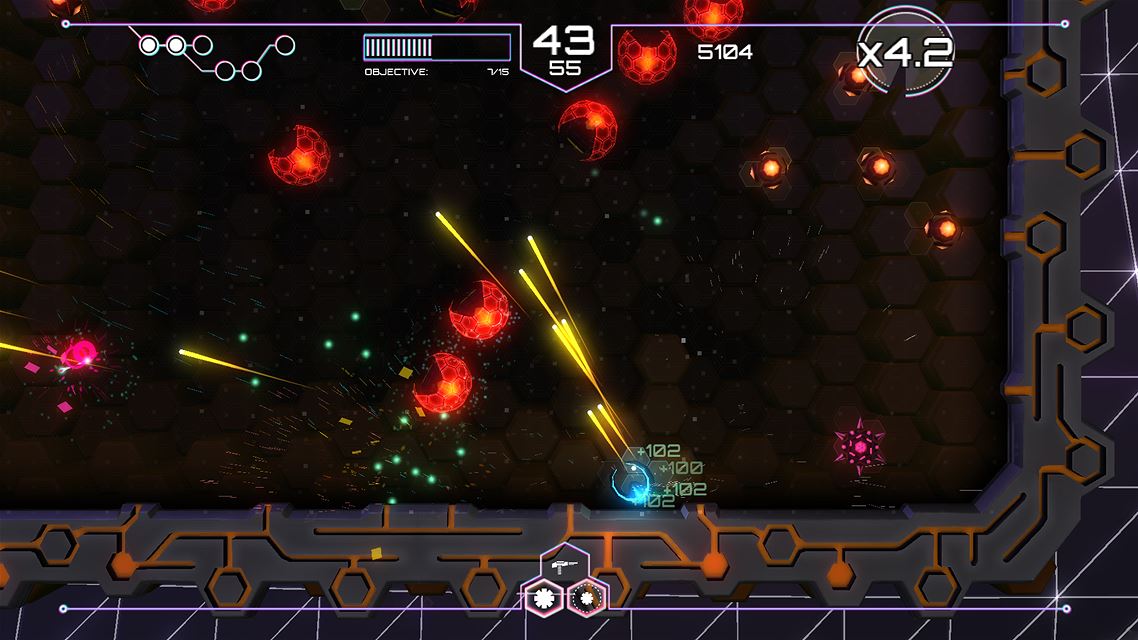 At first glance you’ll think that you’ve jumped straight into a Geometry Wars clone, but as the levels progress you find the old proverb “You shouldn’t judge a book by its cover” is true. Tachyon Project uses the dual analog sticks to move your ship around a fixed arena while shooting a variety of new and challenging enemies. Sounds like the same old vanilla shooter gamers are used to playing, but Eclipse added a few twists and turns into the fray to keep things feeling fresh while pushing along the story. Yes I said story. Sure it isn’t a fleshed out action drama like Mass Effect, but it does give the game a little extra to keep the player involved. You assume the role of Ada, a bot that hacks into corrupt agencies through the net, who is searching for her parents (creators) that released her without fully completing her trial run. The story is easily predictable even with the twist, but gives you a reason to shoot everything in sight. 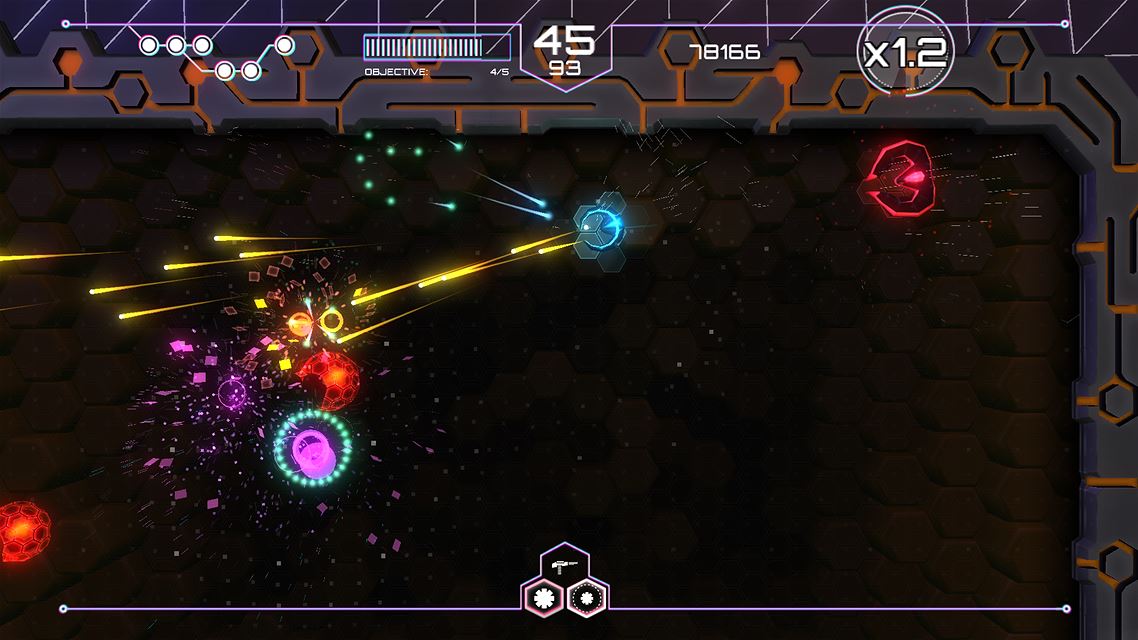 Controls are simplistic and easy to grasp within the first few seconds of playing, but as you progress through the 10 levels you’re able to unlock new weapons and perks for your ship. Each have their own strengths and weaknesses that allow you to pick and choose a combo that fits your playing style. The health system in Tachyon Project is unique since it also functions as a timer for stages that employ time limits. Every time you’re hit the meter depletes, but killing enemies will help it recharge. Being aware of your surroundings becomes the key gameplay factor and once the difficulty starts to spike halfway through the game there is less opportunity for reckless mistakes. Each level offers a few challenges that you’ll encounter over and over, such as staying alive for X amount of time, killing X amount of certain enemies, or destroying everything within your path. There are also some nice twists to the traditional gameplay that factor in to make this more challenging than what most would expect, especially with the stealth missions where the map is dark except when you move or the intense boss battles.

Enemies that you encounter are what really make Tachyon Project a cut above the rest. In the beginning each new variant that is introduced may seem simplistic in design and in the way they attack, but as the game progresses their formations and strategies become more complex requiring you to maneuver around incoming strikes and defensive patterns. Throughout the campaign you’re faced with different waves of enemies that force you to evolve your techniques in order to progress and even though it may not seem like much it does keep the gameplay feeling fresh through the 4hr storyline. Beyond the campaign there are a few extras like survival that is essentially an endless game so long as you stay alive and the support of local co-op. Visuals and sound effects feel dated, but do an adequate job while blasting away. The soundtrack was very upbeat allowing the urgency of the gameplay to flow right into your ears and keep your heart pumping.

Players looking for a game that reinvents the twin stick shooter genre won’t find Tachyon Project worth their time, but for those of us that know what this genre offers won’t be disappointed even if it isn’t a game that we’ll be playing a year from now. The predictable story fits well with the gameplay and gives the player an added dimension other than fighting off the bad guys. Sure it may be the same vanilla story told a hundred times before with dated visuals, but players will look past that with the excellent controls and variety of ship options. After all the mediocre “arcade” releases this year it is refreshing to get into a game that offers a bit of nostalgic appeal and brings a decent challenge to the table.