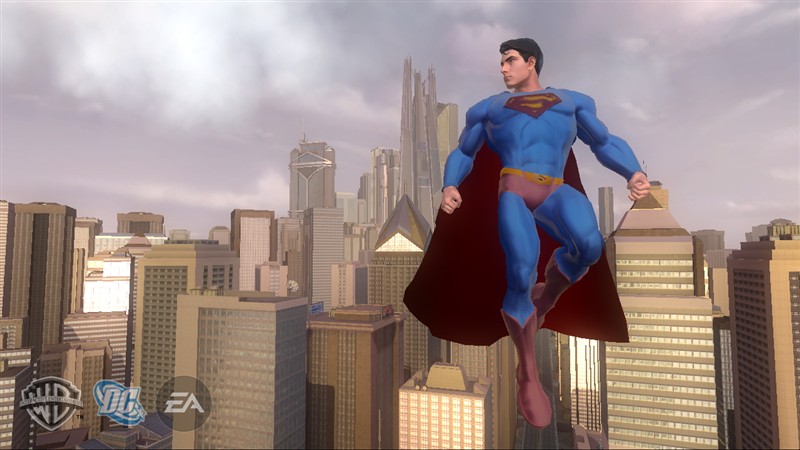 The classic DC character Superman gets another game and if my memory serves me correctly is the first for quite some time. I think many people remember the Superman 64 game on Nintendo’s beloved N64 console with distaste and so hope is high for the next generation game based around the movie of the same name.

Things start out quite promising when our caped hero returns to Earth after an arena like battle on some distant planet. Everything you expect from superman is there pretty much (bar X-ray vision) enabling him to act super in Metropolis. For starters he is able to take to the air at will and not only fly at a leisurely pace but also pick up quite some speed and even break the sound barrier. The sense of scale and speed is captured very well and is one of the better features of the game. Sadly Superman can’t fly so high that he goes into outer space, which is a shame but I guess there has to be limits.

Superman is also adept at moving along the ground with more conventional means of getting from A to B. However Superman being the man of steel has some powerful legs which means he can run faster than a speeding bullet! Again this feature is realised well and makes Superman feel as powerful as you would expect him to. Landing and taking a walk around, other than for leisure is perhaps when you will be dishing out punches and kicks to the various oddball enemies that pop up through the game. The combat is simple but at the same time marred by awkward camera and lock on feature. With simple button presses, players can perform a variety of combat moves both on the ground and airborne. There are quite a number of moves available although it’s quite possible to be successful using very few moves and combos. With his amazing strength, Superman is also able to not only pick up pedestrians who get caught up in the many battles he has but also he can lift some heavy items such as cars, trucks and other large objects in the city. These items can then be used as projectile weapons versus the enemies who attack in phases throughout the game.

Superman is pretty much indestructible which means to make things fair in the game, the developers have employed the use of a city health bar. Each time an attack occurs, the enemies’ task is to destroy Metropolis of which they do until you get in there and smash them to pieces. The city health bar works well as an indication as to how much damage the city is taking and once enemies have been destroyed, some of the city’s health bar is restored. If Superman also rescues the number of innocents who get hurt during the battles then these also add a small slither to the city’s health bar. It works very well and means that players need to remain focused on destroying threats as quickly as possible when they occur.

Superman will encounter the same regular enemies throughout the game as they continue to attack and attack. Thrown in are story sequences from the movie and of course boss battles which offer some slight variation although slight might even be an exaggeration. So what Superman Returns offers is a large open free roaming city to be all tough in and loads of battles with the same repeating enemies. On top of this players can embark on some races with a character from another dimension and a reversal of roles in a Bizzaro mini game. Bizzaro being an ugly version of Superman whose task is to destroy as much as possible in a short time limit. Finally there are 100 kittens scattered around the city and as a task it’s up to Superman to rescue them all, although these mini games are all optional.

Superman Return features a comic book style look which features sparse details but remains effective at portraying the characters and city of Metropolis. The citizens are very basic and will present many repeated models in your travels. I guess when Saints Row raised the bar in terms of NPC characters in games of this type it draws focus on these which are very under par in comparison. As mentioned earlier, the sense of speed is impressive and some reasonable draw distance is achieved although you will notice the odd bit of detail drawing in as you approach objects from afar. Combat is tricky and at times the game offers some slow-motion moments although these are accompanied by some genuine dips in frames at times making for a disjointed playing experience when these occur. There are some errors with objects also which can at times penetrate solid walls. Sure it doesn’t affect the game play but is a little distracting from the overall level of polish applied to the game.

I found the sound to be a mixed bag as on one hand there are various sound effects on hand to provide some aural excitement, such as the wind rushing through your hair as you fly at great speeds. On the other hand there are some average voice over sounds and a blistering orchestral score which I found to be annoying, one dimensional and repetitive. It’s a shame as a lot more could have been done with the music yet we are treated to music that seemed to grate with me after hearing it one too many times.

Superman isn’t the longest game and I think with a little messing around time, my overall play time stat reads at around ten hours. My save says 100% complete yet I still have kittens to find which to be honest will take an age especially as there are no indications in game where they are, bar a feint blue outline when you are within close range. I think many players will complete the story, mess around a little, complete the mini games and then give up on going for the cats unless they have access to a map or guide. So is ten hours enough play time for a game that offers no incentives to replay once beaten and no online or multiplayer support what so ever? Well that’s up for you to decide but in my opinion I would say it’s leaning heavily on the short side.

We’ve already had a number of movie tie in games on Xbox 360 and to be honest they have all pretty much been very average affairs. Well unfortunately, Superman Returns fits snugly into this category as it offers an average experience all around. The game play becomes very repetitive and you feel that a lot more could have been done with the powers Superman has and the whole city being open for exploration. However what you are left with is dull combat missions the odd fire-fighting and of course kitten hunting, racing and some destruction thrown in for good measure. It feels as if the developers were aiming for something generic here rather than pulling out the stops to make something special.

Superman Returns does have its moments of fun and can be enjoyed quite easily. I think they have portrayed Superman and his abilities very well despite him not being able to cause any harm to the indestructible citizens. The lock on and camera proves to be a royal pain for the most part and so players will have to endure. I would say Superman Returns will be fully enjoyed by Superman fans and movie fans alike. Anyone else might not “feel” it and perhaps be left perplexed or short changed. Either way I would recommend Superman Returns as a rental at best for non fans and I’m confident that many will be happy to return the game once their rental period is up.