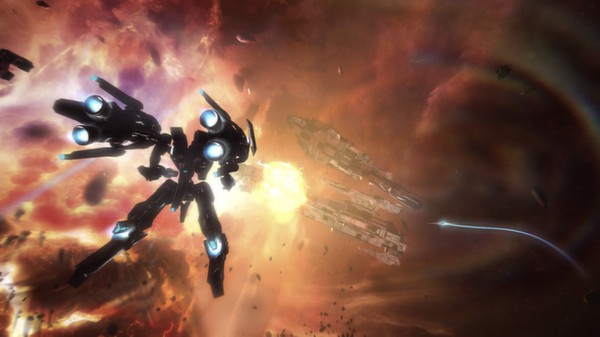 We take a look at the first independently published game on Xbox One from developers Born Ready Games as part of the ID@ Xbox program and determine whether the budget release Strike Suit Zero The Director’s Cut is worth the price of entry and more importantly your time. Take a look at our Strike Suit Zero The Director’s Cut video review for the full picture.

Today we take a look at Born Ready Games’ epic space shooter Strike Suit Zero The Director’s Cut which has already seen success on the PC and comes to next gen consoles with a touch of spice. Coming in at a budget price of around £15, the game offers plentiful missions and lots of space combat that’ll either make you feel all gooey inside or take away your will to live.

It’s 2299 and interstellar war is afoot where as part of the good guys fleet you take control of the awesome Strike Suit, which unlike other more conventional craft is a bit like transformers where it can morph into a robot type craft and unleash extra powerful attacks on unsuspecting enemies. The opening mission provides a standard tutorial which eases players into the nuances of space combat, which anyone familiar with flying games will feel right at home. The basics of any flight combat game is to lead your targets when shooting , and pay attention to enemies firing on your six. Naturally the player craft has armor and shields for defence, but with what seems like every enemy in the fleet firing at your ship alone means these become depleted pretty fast and need time to recharge. This is where some fancy flying skills come into play where balancing your attacking moves with evasion is key to success. In this regard the combat is pretty solid, offering some fine moments of taking down enemy ships of all shapes and sizes and using a number of free fire or lock on weapons. That said, the targeting can be a little frustrating to use and whilst does focus on the nearest craft doesn’t always sit right with what you’re aiming at. The strike suit is an additional layer which trades mobility for power and relies on its own power source to be effective. With enough accumulated kills, players can instantly switch to the strike suit when enemies are in range and let rip with some powerful missiles and gunfire which deplete enemy shields and armour in an heartbeat. It’s fun and invigorating to use, but last only so long, to prevent the player being overpowered.

There are plenty of missions in varied locales of space on offer which last quite some time, and perhaps for some gamers a little too long as one skirmish leads into another with no breaks in between. Now this isn’t necessarily a problem for all gamers, but…due to the repetitive nature of simply repeating the same shooting actions over and over does feel overly drawn out.

The biggest problem with the game despite everything operating very smoothly and accomplished is the fact that it does become rather dull all too quickly to the point of losing its appeal. Enemy craft take too long to destroy, simply because at times they respawn indefinitely or you’re tasked with taking down too many. In this regard it really does feel the developers have drawn out the game to make it feel longer than what it is, which is a shame. Whilst the battles are epic in nature, the direction just feels tiring and forced.

Strike Suit Zero, does look pretty good, with some fine looking craft, expansive environments and impressive explosions of the ships. With lots going on at the same time remains constant at all times with no dips in frames and smooth operation from start to finish which is great.  The only real negative with the presentation is a lack of cinematic direction with regards to the leading cast who only appear as images on the heads up display during missions. In this regard, this can make the player feel detached from the story a little and exemplifies the fact that all you’re really doing is shooting things over and over.

The audio is of a reasonable quality with some excellent sound effects and a musical score that’s well suited to the space theme. The voice acting is pretty decent as well although not the most accomplished and resigned to radio chatter for the most part.

In terms of longevity there’s a number of hours play time with the basic missions, and then a selection of VR missions to undertake which adds a scenario to play through as key characters during battles.  What’s also included here are some leaderboards, medals to strive for and an underlying theme of obtaining high scores to best. Players can choose a different load-out for each missions and replay completed ones too, and if certain parameters are completed can unlock bonus upgrades which come in handy.  So in all, enough content for the price.

To conclude, Strike Suit Zero is a well made game that perhaps is let down by its design choice to drag things out unnecessarily to the point where the game simply feels way too repetitive. The action does come thick and fast, but on occasion it feels like all the enemy fire is focused on the player and none of the other ships. It’s also difficult to see see what’s happening behind your craft what with no radar so to speak and means the player ship is constantly under attack from unseen enemies which is a pain. To add more salt into the wound, the annoying targeting which proves to be too fiddly in the heat of battle, has to be wrestled with and doesn’t always feel as intuitive as it could have been. Negatives aside, the game is accomplished and feels like any other space shooter, with the added neat touch of the strike suit making for some difference. So, if you like space shooters, then this is worth a look if you’re prepared for the long haul. If not, then this won’t capture your imagination and is likely to drive you to complete boredom before you even finish the opening missions.