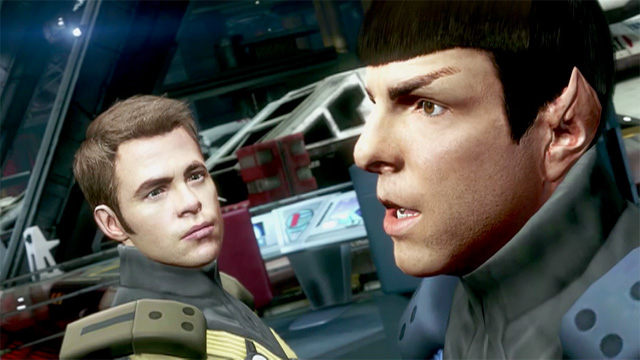 Today we’re taking a look at Namco Bandai’s Star Trek video game which ties in with the movie release and features the same cast of characters. This time the lizard like Gorn have taken a Vulcan artifact which if they can harness its power could spell the end of the universe as we all know it. Cue Kirk and Spock of the Starship Enterprise as the dynamic duo seek to save the day alongside the other members of the crew such as Bones, Scotty Sulu and Chekov.  Story aside, is the game any good?

Good can universally describe the nature of a person who rather than spit on the homeless and deliberately run over old ladies crossing roads, actually helps others in need. It also describes the quality of something, albeit in a somewhat subjective manner where the item being discussed whether that be physical or otherwise is generally perceived as likeable. In the case of Star Trek, the long running TV series – it’s highly regarded generally, and so there’s a certain expectation with anything related. Cue Star Trek the video game and good is not a word one immediately associates with the game.

Movie tie in games are usually complete rubbish and to say that Star Trek breaks the mold would be telling lies. In fact the problem with Star Trek from what’s readily available is a complete lack of vision which ultimately leaves players with a product that’s so lifeless and underwhelming that crap is probably a word far suited to its description. Well perhaps that’s going a bit too far, as the game isn’t crap and actually has a neat mixture of co-op gameplay which involves a bit of stealth, puzzle solving and cover based shootouts – There’s also a few moments of space battling just to round things off and add a bit of drama to proceedings – and yet, the whole package doesn’t quite realize its ideas well enough to equate them into something meaningful or decent.

There are several glitches throughout the game where characters get stuck on the scenery and if one is lucky to avoid them, then something else like the poor AI of the partner character blows your cover when playing stealth or accidentally gets killed forcing a restart. Admittedly there’s more moments when the game plays just fine than the glitches, but still, the lack of polish really is highlighted here. There are also issues with the actual game design which is often quite vague and seems to rest on pressing a single button to bring up the tricorder to do everything. There’s also an abundance of monotonous puzzles for doing the simplest of tasks which begin to grate after a while and simply makes the game tedious.On a plus point, the combat feels fairly satisfying but the Gorn robotic and humanoid enemies make for rather dull and uninspiring counterparts. The only saving grace is being able to sneak up and take them out in one hit.

Graphically the game looks dated, in terms of its overall detail, and yet the character models for the main cast are actually quite detailed and fair representations of their movie versions. The audio also fares much better and whilst the story isn’t great, there’s actually some cool banter between the main characters throughout which makes for some welcome light relief at times.

Aside from scanning items to gain points to help level up Spock and Kirk, or even teaming up with a friend to battle it out together, the campaign offers around 6-8 hours on default settings but is likely going to be a one time deal if that. The levels are all too samey with the same lift and corridor sequences thrown in with gay abandon which doesn’t help keep things interesting.

In closing, Star Trek is a game younger players might enjoy as it’s quite inoffensive and does provide small pockets of entertainment; but this is a poor excuse of a game for such a great franchise and therefore can’t really be recommended above a rental and even then that’s a stretch. There are simply way better third person action games out there that offer co-op play and even if you’re the biggest trekkie fan, then this game is a hard to recommend.