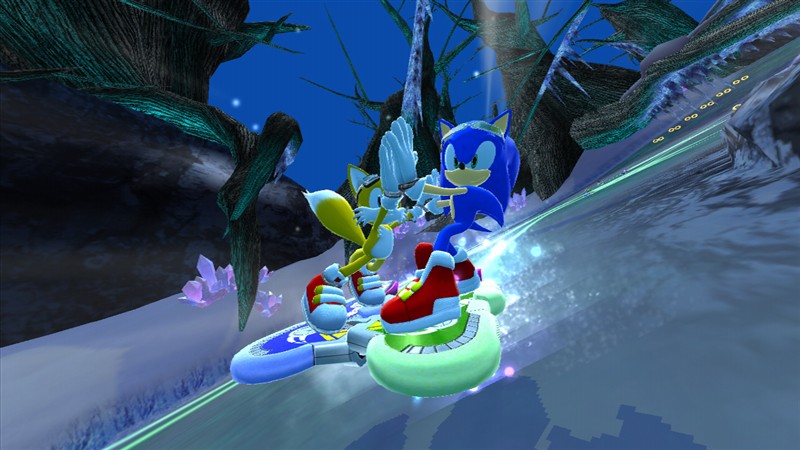 This is not the first time hover boards have featured in a racing game and so Sega’s latest effort relies on the fact that using Kinect to perform the required moves is a novelty and a stand out feature for what is essentially something we’ve seen before in a number of games. So, with most of the experience geared around Kinect and its features does Sonic Free Riders (SFR) deliver a captivating yet energetic racing experience, or something entirely different.

What must be made clear right from the offset, that despite the cartoon graphics and the cute looking characters, there’s actually a solid and in-depth racing game under the bonnet here – perhaps more hardcore than first impressions would lead you to believe. Unlike Kinect Joyride, mastery will take a bit of practice and paying attention to the tutorial a must if you’re to succeed.

SFR offers a few modes for lone, dual locally or online players. The former allowing you to race in free race mode using a few key options to tweak the race. There’s a standard Mario Kart type race where you vie for top position whilst dishing out various attacks or avoiding them, then there’s a race to see who can collect the most rings littered about the tracks, and finally a mode where you aim to survive the course gaining as many points as possible by damaging other riders. There are a healthy number of varied tracks and characters to choose from, and what’s neat is being able to select your avatar as a racer.

The main portion stems from the Grand Prix mode where you work through various scenarios using teams of three characters. It’s here where you’ll unlock many of the game’s extras. This mode features several mini game type events where it’s not always be number one in a straight up race, but more often then not performing tricks, keeping a set speed limit, collecting rings and knocking out other riders for score. It’s an interesting mix of events, and introduces the player to all the main characters and their nuances.

There are couple of modes available for two players split screen where riders can work together as a team in the Tag and Relay modes. The online modes offer similar racing thrills for up to 8 riders but getting a full game seems problematic at present probably due to the lack of online community.

When playing freeplay you’re able to purchase new boards with the many coins you collect during races. These also extend to bikes which control slightly differently and make for a welcome change if input method compared to the boards. There are several upgrades you can purchase as well, where the clever trick is during races activating them by swapping over stance.

And so onto the controls. This is the game’s biggest asset and when working properly is very intuitive and involving. Aside from tilting from side to side to make turns you’ll also be holding out arms to glide, grab and even to hold onto poles which take you through new routes. When using weapons you’ll also be tasked with throwing or shaking motions adding a bit of diversity to proceedings. The biggest issue with the game’s controls are how well Kinect picks your movements up.Before each race there is a calibration which is assumed determines how far a player can bend comfortably, resulting in tweaked sensitivity. However, simply standing still during these moments works fine as well and in some cases offers more responsive control. For the most part it works, but listening to other gamers and it’s clear that getting the right conditions are problematic at best – resulting in very different gaming experiences.

The game’s menus are a bit fiddly as well and although there’s voice commands, these are not very responsive, and with no actual clues as to what you are allowed to say become moot. With being developers, it’s hard to say what menu set-up would be best, but the hold and drag method on offer here can be frustrating.

SFR graphics are bright and fast moving, offering a good sense of speed and enough variety to remain interesting. The tracks are well designed and the characters as you would expect them to look. It’s still very much animated cartoon mode in terms of the overall look, but considering this is a Sonic game, stays true to what is expected. As mentioned, Kinect’s tracking seems to be off for some players and completely fine for others which suggests that calibration is possibly an issue for the game.

The audio can grate if you’re not into Electronica, so that means either using your own custom soundtrack or hitting the mute. You’ll be left with the typical voice acting you’d expect from a sonic game, which includes squeaky high pitched voices and moronic yet overly enthusiastic tones. The rest of the audio dances nicely around your hoverboard and the weapons you unleash on all comers.

There’s a fair bit to master here, and like most Sonic games you need to practice and learn the tracks if you’re going to get the most from the game. Playing is quite an involving affair and means if you’ve not got the stamina then you might want to take frequent breaks. Once you’ve beaten a race or mode you can try and best your high score, and if you look at the numerous achievements, try and go for those. In this regard there’s a lot of challenge on offer as you beat various track times and use specific characters.

As already mentioned the two player mode offers some legs to proceedings as you work together, however, if space in your front room is an issue, then this mode is be avoided, as there are accidents most certainly waiting to happen at every turn. For two experienced players, there’s a lot of fun to be had teaming up.

Sonic Free Riders is probably the first Kinect game that isn’t squarely aimed at the casual audience because when you do get the conditions right, there’s some solid progressive racing on offer. However, clunky menus, and some inconsistencies for some players can turn what should be an enjoyable venture into something quite horrible indeed most notably the game constantly pausing because it loses track of you as you move about the play space. It’s therefore very hard to judge a game which has so many variables which can change a players perception. When first party Kinect games seem to work flawlessly and don’t need fiddling about, it’s a shame when this doesn’t extended to the third party products as evident here.

Sonic fans will no doubt lap up the game and aim for top marks on all tracks, although it’s safe to say some patience and learning is a must. For Kinect hungry gamers, there’s something charming on offer, but you might not feel that right away as this is not the most pick up and play Kinect game available. If you enjoy racing, and feel like you want a more involving experience compared to the norm, then you’ll do well to invest in this highly interactive game.