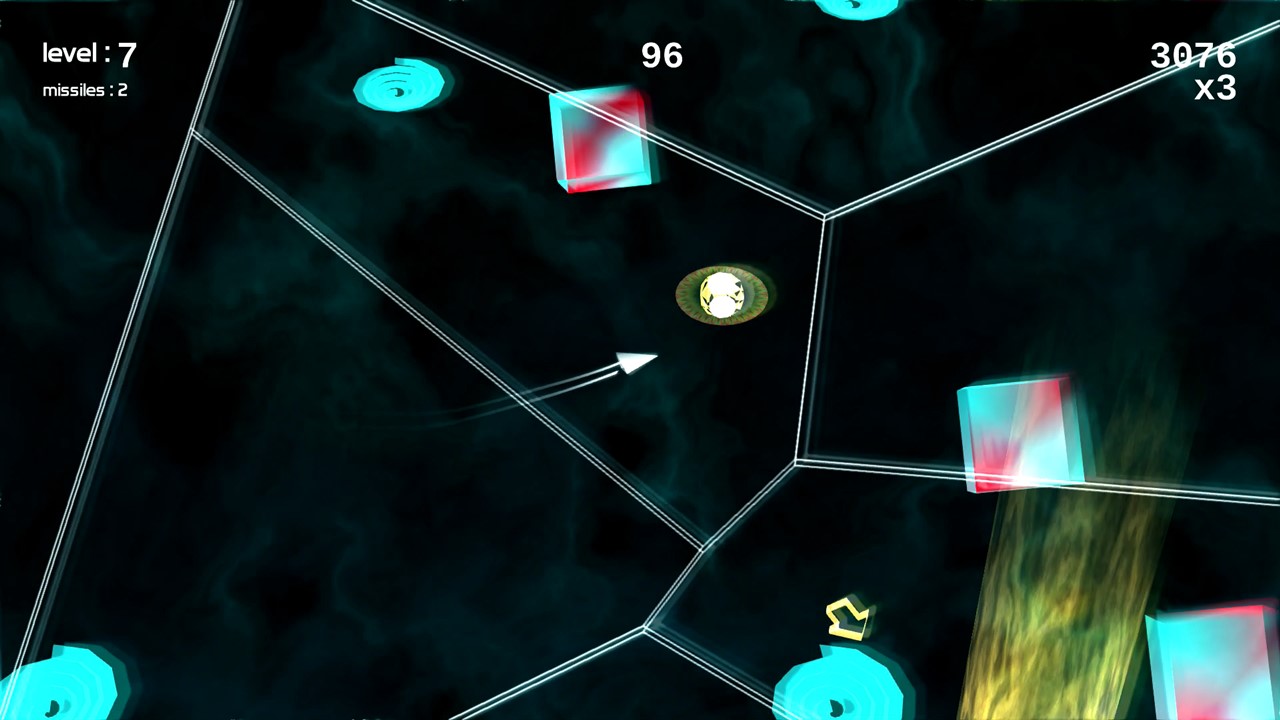 Today we take a look at the rather snazzy Sixty Second Shooter from Happion Labs which is available across a number of systems and is part of the ID@Xbox self publishing program. The game is simple, score points within the sixty second time limit by shooting anything that moves, up the stakes and then try again…and again and… You get the point.

Jumping right into the game, the menu offers a few tweaks to the game’s background, a couple of soundtracks to toggle, or switch off and two modes of play which includes the unlockable Infinity Mode. The core game has players controlling a small space craft set within the confines of imposing barriers with the aim of not crashing into any other object. Players are not alone as they start from level one and have to juggle between shooting moving cubes which fragment into smaller cubes when shot, and enemy ships which come in a variety of forms, including those which can’t be destroyed by regular fire. Progression comes by way of moving through portals which increases the level and the danger – however, due to the sixty second timer, enemies become more frequent as the clock ticks down regardless of what level you are on.  It becomes a mad dash around the screen, avoiding getting stuck in a corner, collecting power-ups to go on the offensive and aiming for a high score. Players who are smart with the power-ups can net some nice point multipliers as well as score big with chained attacks. Careful saving of power-ups and enemies can net greater rewards and using bombs or missiles can result in massive chain attacks where the screen becomes filled with chained explosions in slow motion, it’s a simply  joy to behold.

The infinity mode offers the same premise as the sixty second offering except this time, players can collect power-ups which increase the timer. There are different tactics to use in this mode seeing as the time limit is still present but is not so much of an issue as there’s less of a mad dash. Players can avoid breaking up the cubes, or collect all power-ups before heading through the next portal  and generally find their feet more readily. It’s a natural inclusion and means there’s a bit more to work on with the game’s leaderboards, which has to be said, aren’t the most user friendly to navigate.

The game does provide some neat visuals alongside its thumping sound effects and the two fast paced dance tracks as backing. When events ramp up, the screen becomes filled with objects,  however, with so much going on and depending on which colour background is being used, sometimes it’s hard to keep track of certain colours. Some enemies and their fire are red by default which is a dark enough colour  to get lost within all the madness at times. Aside from this, the game’s looks whilst simple and lacking in details, are functional and serve the purpose of focused play free of distractions.

As mentioned, the game offers leaderboards to peruse to see how many places one can climb, there are also some neat achievements to go for, and of course bragging rights amongst friends. However, that said, there are just the two modes on offer where bouts can last from a few seconds to much longer, however, the game does have a one more go factor but over the longer terms isn’t likely to hold interest for marathon sessions.

The question remains, whether for £3.99 is Sixty Second Shooter worth the price of entry? On one hand, yes as it offers some neat simplistic, yet highly challenging arcade gameplay that certainly entertains in smaller doses.  On the other, despite there not being much to the game aside from leaderboards, the price is so minimal that it’s worth a shot for twin stick shooter enthusiasts.