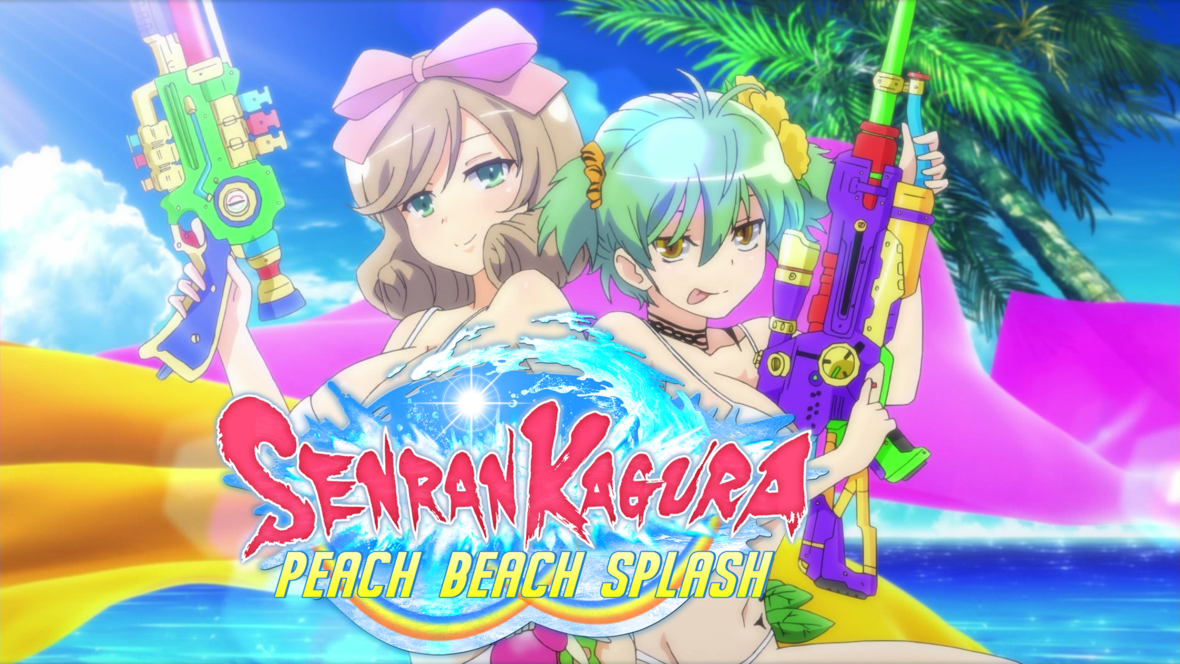 Marvelous Games are back with their kunoichi in the rather wet looking Senran Kagura Peach Beach Splash – a spin-off game from the usual free roaming beat-em-up madness we’ve seen before. It’s not the first time the girls can be viewed in a different light as the cooking based “Senran Kagura Bon Appétit!” provided plenty of music based jiggling outside of combat. So, what is Peach Beach Splash or PBS as it’s commonly referred to as? In a nutshell, the girls are mysteriously summoned to an unusual island where their schools are tasked with a new set of actions which ditch the swords and melee weapons in favour of water based guns. It’s a perfect excuse to soak the girls in water, remove items of clothing and see them jiggle around in swimwear and here lies the game’s biggest problem.

Marvelous are obviously very proud of their Senran Kagura series whether that’s the manga,anime or video games but it seems that whilst attempting to appease rabid fans with originality are exposing a lack of imagination in the end goal. The problem here is as an arena based third person shooter, PBS isn’t that great. It’s a little wishy-washy by design and compared to more serious offerings simply not as good as it could be. What we do get though is another game where the same character models can be seen in various states of undress, and gasp, this time with soaking wet clothing. This is all well and good, but we’ve seen the girls like this in how many games now and to be frank it’s become a little overplayed especially as the same assets have been rinsed and repeated so many times.

So let’s rewind a little first. PBS offers a story mode where you pick one of the now familiar schools comprising of 5 girls in each. You’re then treated to a number of scenes which feature close-ups of the models performing the exact same animations we’ve seen in several games before whilst they talk, except this time each girl is in swimwear by default. The girls are there to fight each other for an ultimate prize of anything they desire should they beat the competition, but as mentioned combat is by way of water based guns rather than the usual swords etc. There’s some interesting exchanges of dialogue as expected and the introduction of two wild and wacky host characters who are broadcasting the entire event over “New-Tube” (a parody of Youtube in case you need that spelling out). As a viewer, it’s obvious the broadcasting is a little on the pervy side given there’s ample opportunity for the girls tops or bottoms to be sprayed off during bouts. Sure it’s fitting with the series as a whole but in a way feels a little contrived this time. It’s certainly not a new Japanese idea as several games offer similar combat with clothes ripping as a side focus. Each story comprises of 10 stages which range from shooting up clone enemies, putting out fires and several other objectives before moving on to the real meat of the combat versus the girls of the other schools. 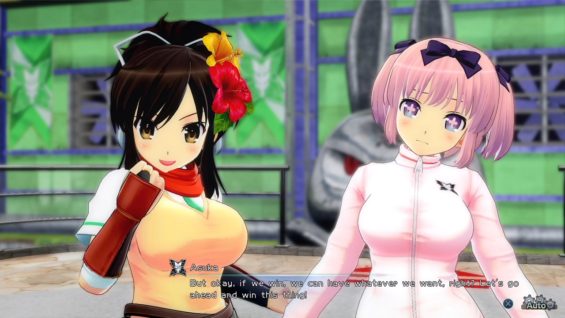 There’s an additional set of story missions available entitled Paradise Episodes, but the most fun can be gained from the V-Road Challenge cups. These are a series of rounds versus increasingly difficult opposition in 5 vs 5 bouts against the clock. Score the most downs to win. If you’re successful your team can progress to the next round until you reach and beat the final. Once a cup has been won you can up the ante by moving on to the next (more challenging cup). The caveat here is should you lose in let’s say the semi-final, you have to start the cup from the opening round, so a bit of pressure added here. Interestingly throughout the game you’re able to acquire packs of cards which can be used to unleash melee attacks and special moves in combat. You’re able to swap them out at any time and even upgrade them for greater power with any duplicate cards gained. It’s a neat meta game to mess around with but serves as a distraction from the main combat. Alternatively, players can jump online and play with other players or bots in co-op survival or Versus which is nice option to have.

So, what’s the problem with the combat? For starters the controls don’t feel as tight as they could be and when coupled with some awkward level design makes the gun-play feel lacking. There is a lock-on to help with aiming but it just doesn’t sit right and when coupled with no option to take cover it’s just a massive free-for-all with little to no tactics (when playing with the AI across most of the modes). The combat is also bathed in colour and effects which often make it difficult to see who you are shooting at and whether you’re actually scoring hits or not. It’s just a disjointed mess of a shooting game which even after some mastery doesn’t feel polished enough to be of any lasting merit. As mentioned, one of the features is being able to spray water on downed opposition which shows off the character with a removed bikini top or bottoms. Obviously any naughty bits are well censored but the humiliation is simply not a new concept for the series. 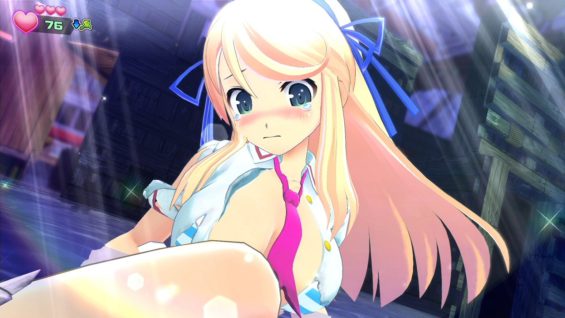 Outside of the main combat sees the return of the shop and dressing room which allows you to purchase any unlocked gear and extras. The dressing room is the standard model viewer where clothing, hair and accessories can be swapped for each girl. An additional water based feature is being able to spray the girls with water showing off wet clothing effects as a new addition to what we’ve seen before. And yes, you can grope, slap and kiss the girls as seen in Estival Versus. The diorama also makes an appearance for those who want to create artistic scenes with the girls for a nice screenshot collection.

Visually, PBS looks great as expected, with plenty of colour and vibrant visuals supporting the anime looks. It’s familiar ground here but struggles to maintain high frames per second on PS4 sometimes dipping below 30fps when there are lots of characters on-screen. It’s a shame a lot of assets have been lifted from the other games though rather than offering something fresh (aside from the wet clothing that is). Audio is as expected with great performances in Japanese with English subs being the order of the day.

In terms of length, there’s a fair amount to do here what with upgrading, unlockables and card collecting to strive for beyond the story completions, alongside raising the difficulty when replaying for added challenge. In this regard players will get their monies worth even if there’s quite a bit of repetition. 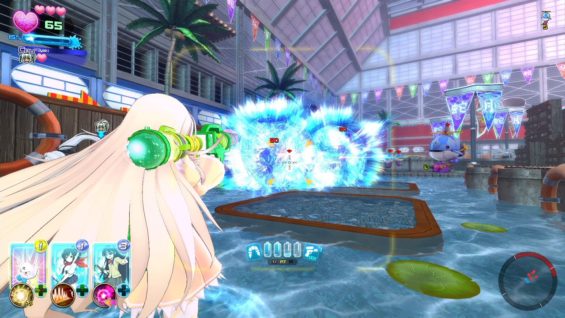 Senran Kagura Peach Beach Splash is a mildly fun and colourful game to play for fans of the series, that’s a given. However, it’s by no means perfect and could do with quite a lot more tightening up especially with regards to the combat elements. The humour returns in full effect as does the lewd content for those interested, but overall the package just feels a little dry which is ironic considering the water based gameplay. So the question remains, is this worth a punt? For the die-hard, hardcore fans then no question as PBS is aimed squarely at you. For those looking for a tactical third person arena based shooter then this isn’t going to scratch the itch no matter how sexy it looks. For newcomers, PBS isn’t going to convert you anytime soon which is a shame as the humor seems to have taken center stage here leaving a game which is shallow and rather uninspiring especially when compared to the other games in the franchise. Hopefully, Marvelous can stop the sinking feeling setting in and come up with a cracking new game idea for the next Senran Kagura game.