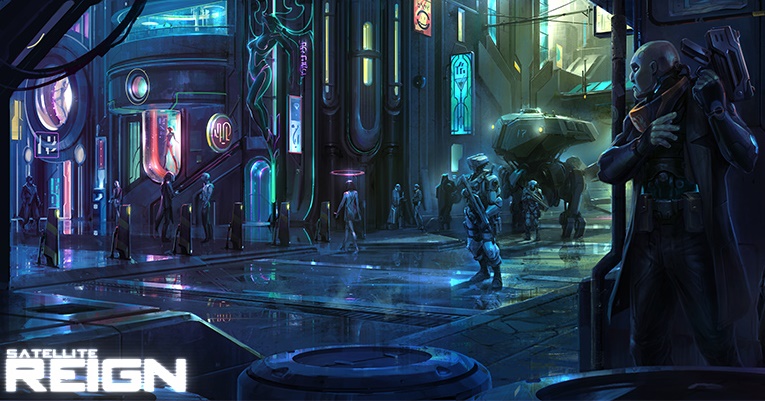 5 Lives Studios recently updated their cyborg infested tactical strategy game Satellite Reign which has been available via Steam Early Access for some time now. The game has continually been updated but has now doubled in size with the arrival of a new district amongst other things. Players can see the full list of additions below and also benefit from a 20% discount on the game if purchased via Steam.

New features of the latest build:-

Industrial District
Introducing the Industrial District! This is primarily the turf of the Uzy Korporatsiya, or Uzy Korp, a Russian-based organisation. They control the city’s imports, exports, and are big on armour manufacturing, so you’ll want to keep your plasma weapons handy.

New Factions
New corporations now patrol the streets and compounds of the city. The previously mentioned Uzy Korp are located throughout the Industrial District, as well as in the compounds operated by their subsidiaries in Downtown, such as Ronin Industries.

The Eternals make their first appearance as well. A corporation born from a religious movement, they own and operate the City Surveillance Authority, and can be found patrolling their respective compounds.

New User Interface
While it’s still very much a work in progress, you’re going to see some big improvements in the UI, both visually and functionally. The in-game HUD is being revamped, and the menus have been overhauled as well. There’s still more to go, but it’s already looking great!

Streaming System
With the introduction of a new district, and wanting to have a full city without any loading screens, we’ve now got a system to stream the world into memory dynamically. Again, it’s still a work in progress, but it has come with some nice benefits, including reduced GPU memory usage.

New Civilian System
You’ll likely notice more people wandering around the city now. This is thanks to a completely new approach to populating the city. Previously, there were lots of people in memory, but they were often outside of the actual gameplay area. Now, there are people to be found all over!

New Tactical Opportunities
You’ll now have new tools at your disposal to break your way into the various compounds throughout the city. The Hardwire ability allows for more of a brute-force approach to getting through security.

Ventilation systems can also now be exploited by your agents as a new way to sneak around. But, make sure you’ve evacuated any noxious fumes they might be funnelling.

Updates to OpenGL mode
Various bugs in OpenGL mode have been fixed, which should hopefully make things easier on our Mac and Linux users. As always, let us know if you come across anything that looks a bit funny.

Satellite Reign is a real-time, class-based strategy game. You control a squad of four agents, each with distinct and unique abilities, as they vie for control of a fully simulated, living, cyberpunk city.

The game world is designed to facilitate emergent gameplay, giving you the tools and freedom to play how you want to play, so you can create strategies and scenarios that not even we had anticipated!

Customise your team with the strength to destroy your enemies head-on, or hack into their facilities to manipulate their infrastructure without them ever knowing you were even there.

Will you take down your enemies with brute-force? Covert espionage and infiltration? Or will you use propaganda to influence the citizens of the city and overthrow the controlling powers?