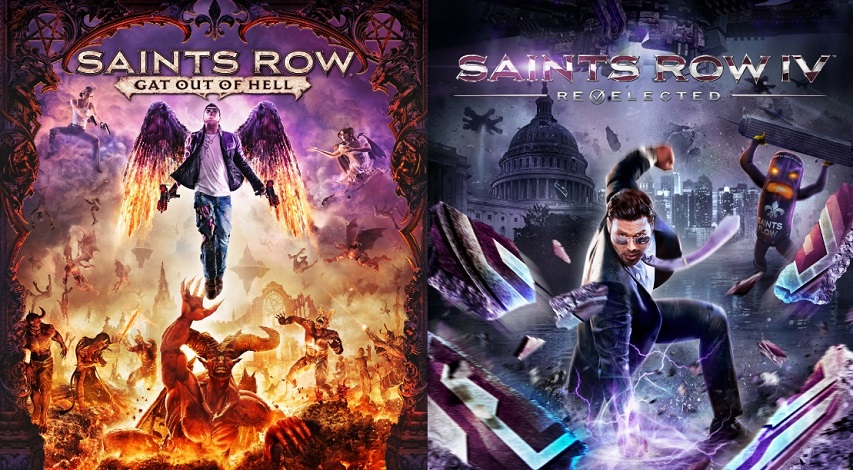 Deep Silver, Volition and High Voltage present their 2013 release Saints Row IV reborn on PS4 and Xbox One alongside the all new standalone content Gat out of Hell which reintroduces tough as nails character Johnny Gat as a playable lead. With the package essentially containing two games, is it worth jumping in again if you’ve played the previous outings, or is Gat out of Hell a jaunt worth romping through. Take a look at our Saints Row IV Re-Elected & Gat Out of Hell review for the full picture.

Today we’re taking a look at Deep Silver, and developer Volition’s Saints Row IV and Gat out of Hell expansion on consoles, but first lay out what gamers can jump into depending on their wants and desires. To begin, PS4 or Xbox One gamers can purchase Saints Row IV Re-Elected at retail for full price, which includes the Gat out of Hell extra content as standard alongside some other DLC extras. Alternatively, Gat out of Hell can also be purchased separately and is available on PC and last gen systems as well.

Looking at the two games and starting with Re-Elected, and it’s clear the game has been polished and includes all the downloadable content such as additional weapons, skins and customization options compared to the standard original game. There’s also extras such as the Enter the Dominatrix DLC campaign making the purchase a well rounded package for those who missed out on the original release. Without going into too much detail, Aliens have invaded Earth, and rather than playing the game from the perspective of a street gang, the Saints are now running the show leaving the customizable player character as the president. Cue lots of madness and in-jokes, but more importantly, a shift in perspective as players are given super powers to mess around with making the game feel more like an adventure playground for superheroes. The game is heaps of fun with lots to do outside of the main story and of course the added extras make for a wealth of playing options as players upgrade and undertake various mini-missions. The conversion has been handled by developers High Voltage and in comparison to the PC original, it appears they have done a grand job of emulating the PC game on ultra settings, although the frame rate is locked at 30 frames per second. There are some visual improvements along the way such as dynamic shadows and improved draw distances making the port of the highest quality. Despite some minor drops in frames the game generally holds up well and remains fairly consistent making for smooth and enjoyable gameplay whether your jumping across the rooftops in the fictitious city of Steelport, or causing mass mayhem against the aliens on the streets below. For newcomers, this is an enjoyable outing, although certainly a far cry from its more grounded street gang roots which in some ways is a shame. That said, there’s buckets of personality here making the game easily accessible to all and is filled with gags and movie references a plenty. Realism is totally out of the window here, making for an adventurous title that doesn’t take itself too seriously at all – and in this regard is better for it.

Gat Out of Hell is different kettle of fish altogether and sees the original bad boy Johnny Gat and tech babe Kinzi enter Hell itself post the Saints Row IV story – much like The Enter The Dominatrix add on. However, this time Hell has its own environment to play around in and more importantly gives players the choice of swapping between the two characters at will which is neat. The story is pretty simple and plays on the hardness of Gat with maximum effect. The main objective is to retrieve the President’s soul from the clutches of Satan by causing as much mayhem amongst his minions to get his attention. There’s a wedding thrown in for good measure and the appearance of Satan’s daughter to name but a few scenarios from the campaign. It’s fun, edgy and completely familiar ground if you’ve come from Saints Row IV or Re-Elected. However, one notable change of pace is the option to fly using angelic or demon wings which are available from the offset. This adds a new feel to game which goes well beyond the simple gliding in Saints Row IV. There’s some great moments as players speed through the air and duck and dive around the buildings making Hell feel quite open and welcoming. Players can once again upgrade their powers and abilities which includes the devastating ground stomp, ice blast, summon and damaging aura. There’s also changeable elements to these as well making for a vast array of moves to dish out suitable punishment against the devil’s hordes who come in winged , vehicle and grounded forms. Combat is as fluid as ever with the variety of upgradable weapons, and the inclusion of a melee hammer is a nice touch for those who would rather ditch the fire-arms.

Gat out of Hell features an assortment of side activities which include befriending other characters residing in Hell, taking over territories and generally kicking ass in a variety of ways. Sadly, some of these elements are almost carbon copies of those seen in Saints Row IV albeit with a devilish slant. There are some new activities on offer though to take advantage of the setting and player wings. There’s also an expected abundance of collectibles to hunt down as well which is neat for post game completion. The story itself is quite short spanning only a few main missions and can be completed in around 5- 6 hours – which also includes general goofing around. However, the story is only half the game. Expect to pump in double the hours or more if going for 100 per cent completion because there is lots to do.

In terms of visuals and performance, Hell isn’t as colourful as Steelport, but does have its own nuances and visual style. It presents a darker tone with a splattering of colour here and there which at least makes it stand out from previous environments. There’s a distinctive look to each of the neighbourhoods with plenty of neat touches to discover for those with a keen eye. Performance wise, the game runs silky smooth with no slowdowns or graphical hiccups which is excellent.

Audio is great with some outstanding moments of comedy, most notably the craziness during cut scenes which will at least bring a smile to the face or worse some laughter. Hell is not so serious, and with the rather one dimensional Gat character at the helm is well set up for in jokes and playful gags. It’s well made with solid voice performances for all concerned making for a well polished audio sphere.

Gat out of Hell as a standalone game can easily be picked up and played with no real knowledge of the series past being a requirement, although it does help a little if you’ve already played the previous games to better understand the who, why and what. In terms of fun, there’s lots on offer here as a no nonsense game which for the asking price is good value overall. The only real negatives here are a lack of character customization options, familiarity and lack of complexity which if you’ve come directly from Re-elected straight into this it might make you feel a bit burnt out. If the last time you played Saints Row IV was back in 2013, then the re-entry into the series with its Hellish theme is enjoyable, fresh and well recommended.

As a complete package for the Saints Row fan, then Re-Elected might not feel too distant from its last gen counterpart so caution is advised especially if you already purchased the DLC – in this instance the standalone Gat out of Hell is very much for you. For those who missed Saints Row IV the first time, then Re-Elected is the definitive package and can’t be recommended enough – especially if you’re willing to escape from the clutches of attempted realism seen in other open world games.