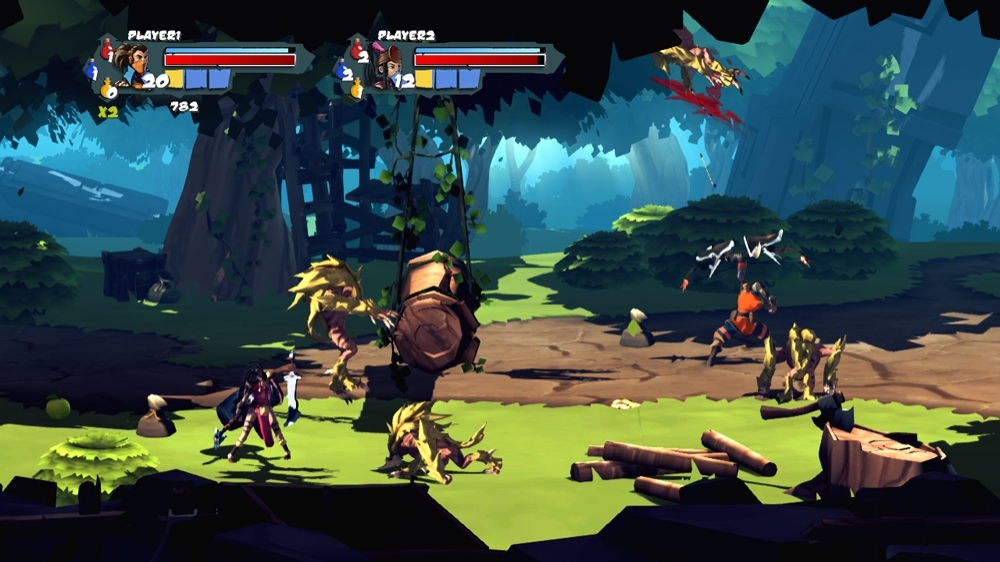 I’m a huge fan of arcade brawlers, with my “big three” still being X-Men, Teenage Mutant Ninja Turtles: Turtles in Time, and The Simpsons Arcade Game. There are others I love, of course, like Castle Crashers, but since those first three games were basically both my childhood and my introduction to video games, they hold a special place in my heart. Sacred Citadel aims to capture the classic feeling of those previously amazing arcade beat-em-ups with a modern RPG flavored twist added to the formula, and you know what? It really works. 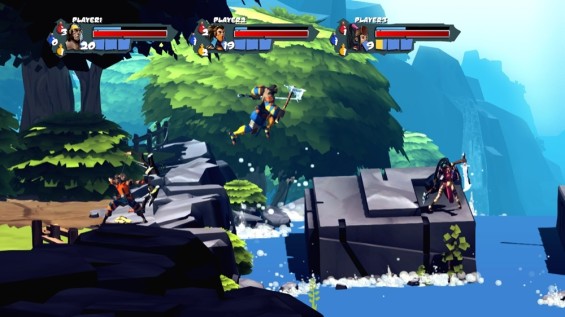 Contrary to what art games would have you believe, the most important part of any game is its gameplay, and Sacred Citadel holds up wonderfully here. True to claims, it plays like the old school arcade games we know and love, but with a little extra depth. Players move back and forth on a background, able to attack only things that are in front of them and fairly close to being on the same ‘level’ they are on. It isn’t quite as picky as Castle Crashers is, thankfully, and will generously allow you to land attacks on enemies that would have been out of your attack zone in that game, but the principle is the same. This also means that the old tried and true strategy of baiting enemies into attacks, swooping in from the top or bottom to land strikes, and then getting away before their combo-breaking counter attacks can land is a good idea again.

The extra depth comes in multiple forms. Several elements from my personal Big Three are included, such as stomping the hell out of a downed bad guy like in X-Men, or crashing into enemies with a tackle like in Turtles in Time. The game also features simple and intuitive combos that are usually only a few commands in length, making them easy to pull off during gameplay. The game also adds depth through the use of a block button, a sprint button, a modifier button, primary and secondary attacks, special abilities, potions, and inventory management that can be done in real time between battle sections. Leveling up also yields skill points which can be used to upgrade your core stats. 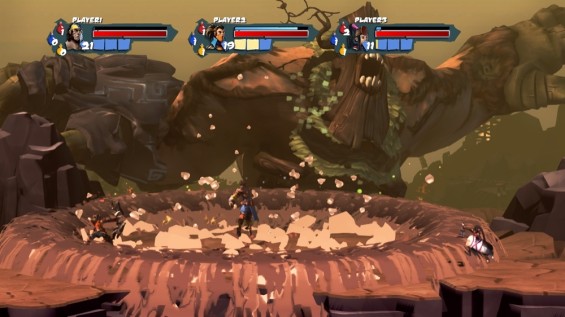 Each character dual wields two primary weapons, which can be swords, axes, or clubs. Swords have higher critical hit chance, axes ignore blocks, and clubs can stun. You can mix and match the weapons, as well. All four playable classes also come with a unique secondary attack, which ranges from a huge freaking hammer for the warrior, to a bow for the ranger, or magic for the shaman and mage. Special attacks have three unlockable levels and can be built up through combat. These special abilities have various character specific effects, such as paralysis, damage over time spells, or rapid fire assaults.

The game is longer than traditional brawlers, with levels that can be individually selected and replayed as many times as you wish without needing to replay the entire game. Between levels, you can visit a village to buy temporary power ups, new weapons or armor, or even take wagers on whether or not you can clear specific challenges in each level, such as completing the level in a certain time, or completing it without dying. Each level also scores you from bronze to gold, with criteria such as time and combat score. Most levels end with a fun boss battle that often introduces something new or throws some unique challenges at you, and there are some truly awesome bosses that are equals parts enormous and cool. Some may prove to be more of challenge than you can handle on your first run, but dying has no real penalty which is good for newer players. Some may want to enjoy the game without stressing about how many potions they should try to keep for the level’s boss. Real challenge can be found later through the wagers and more, as well.

There is a light story to the game, but it exists more for humor than for an explanation as to why you’re giving the smackdown to orcs, zombies, and other various monstrosities. The graphics and sound, however, are both superb, with one of the most unique visual styles I’ve ever seen in a video game. It isn’t quite cel shading but it isn’t quite anything else I’ve seen either. The sound is catchy, fun, energetic, and evocative of the brawlers I fell in love with as a kid, hitting all of the right notes in all of the right ways. 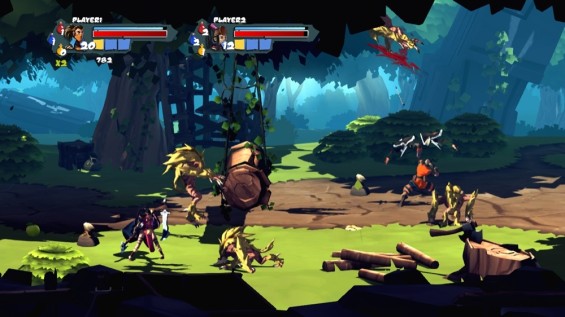 The game, of course, has co-op, but rather than the traditional four player co-op, the game focuses on three player co-op. While it struck me as odd at first, it does feel like the play area would be a bit too cluttered with four players (plus enemies) all occupying it at once, so I support the decision to go with three only. I’d still like to see some tweaking in a sequel to allow four or, even better, six players to play at once, as the game does have Xbox Live support. There are also leaderboards and the promises of DLC to come, with one bundle of levels out for download already. Hopefully, this is a sign that fans will have more to look forward to in the future.

Sacred Citadel is a damn near perfect hybrid of the old school and the new, and it stands out in every way that counts. All of its features blend together into an incredibly fun experience that feels familiar, but new and different. It feels like X-Men, it feels like Turtles in Time, it even feels a little like Castle Crashers, but at the same time, it always feels like its own game – Sacred Citadel.