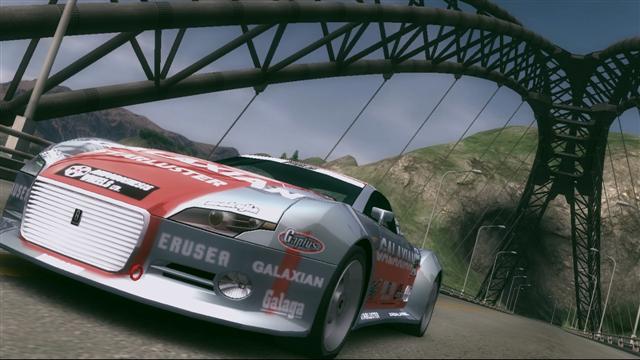 First things first; Ridge Racer 6 (RR6) is not the same game as Project Gotham Racing 3. Sure they share similarities in that they feature cars, tracks and racing but that’s where the similarities end. RR6 is a thoroughbred arcade racing experience where reality is chucked out of the window in favour of car handling physics that border on the extreme. Drifting is a crucial part of the game and it is something that players will have to truly master if they are to be successful on or offline. Drifting basically involve sliding your vehicle around corners so as to maintain speed and to give you the best direction out of a corner for maximum acceleration. This is very easy to perform as it requires the player to simply ease off the accelerator whilst turning and then reapplying the acceleration during the drift; making sure to keep the direction of the car in line with the exit angle of the corner.

RR6 features several modes of play which includes World Xplorer, Single Race, Online Battle, Verses, and Time Trails (here you can compete against the World’s best race times if you are connected to Xbox Live). The World Xplorer is the main bulk of the game and features a grid menu whereby each event is linked to another to form routes through the game. Starting on the bottom of the screen the events are easy although they get progressively harder as you move from left to right. Players are able to choose a series of events to race by plotting a course beforehand or they can simply participate in one event at a time with no clear route. Once a certain number of routes have been cleared (and this means coming in first- there are no prizes for 2nd and 3rd place here) then more routes are unlocked offering an even greater challenge. Also if a player can beat all the routes that surround the mysterious question marks which appear on the menu a new car is unlocked.

All the cars featured are created designs from Namco and look authentic enough to be real cars with the exception of the special cars which at times look like something from a futuristic intergalactic racing event (whatever those look like). There are 5 classes of cars ranging from class 1 up to class 4 and then special cars. Within each class there are a few different handling or drift styles which range from mild, standard, dynamic and special. I found the dynamic to be too “floaty” for my tastes as the cars seemed to slide all over the place compared to the mild and standard drifting vehicles. Either way the player can choose which style suits them and then master that type of handling. One thing that might annoy some players are the un-lockable cars which mostly are the same vehicles that you already have in your garage but sport different paint jobs any other differences are negligible in my opinion. At a certain point in the game you can unlock a mode which lets you use your own custom colour schemes which is pretty neat if you like your vehicles to be bright pink. Sadly these custom colours do not work in online races as far as I could tell.

The tracks themselves are designed very well to suit the pace and style of the racing and in particular there are some devious corners to try and navigate at speed especially once you enter class 3 and above. The trackside detail is impressive and features a number of billboards, posters and imagery from previous Namco games such as Soul Calibre, Tekken, Death By Degrees and Klonoa to name but a few One. of the main features of the racing is the inclusion of a nitrous boost which charges up a 3 segment meter if you drift at high speeds. The nitrous can be used at any time during a race and as the name implies gives you a significant speed boost for a short period. With the 3 segments players can choose to use a level 1 boost, level 2, level 3 or even one level 2 and a level 1 depending on how full the segments are. Also if players are able to drift during the tail end of a nitrous boost they can earn an ultimate charge which basically fills the nitrous segments more than normal. This introduces an element of tactics during races as the best players will be able to time their nitrous boosts so as to get the maximum ultimate charge around the course. I have even witnessed one guy online keep using a level one boost around pretty much the whole length of circuit by simply timing his moments to boost and making small drifts even along straight sections of the track.

RR6 looks very sharp and runs very smoothly even with the 13 opponents who accompany you in most events. The sense of speed starts out quite slow when using the class one cars but soon becomes faster once you reach Class three and above. Once players unlock the special events the speed does become quite fast although I did feel at times that it could have been a little faster once I had got used to it. The vehicles themselves are modelled very well and as I said earlier look authentic but are not so to speak. Unfortunately there is no damage to cars when there are collisions and handling isn’t affected either which I guess could be a progression for the series in the future (at least visible damage). The circuits all have their own themes and take place from dusk until dawn which adds some variety. Everything in RR6 is slick and that includes things like the menu presentation and the actual racing. Whilst the game may not win any awards for being the best looking game around it is still good enough in an average way.

RR6 features screeching tyres, more screeching tyres and then a cheesy announcer. The announcer basically comments on your driving and sounds like a hyperactive child high on E numbers. Well maybe not quite but still he can get annoying after a while. How many more times does one have to listen to “That’s a great start it gave me chills”? Luckily you can change the announcer voice to Heihachi from Tekken or some robotic woman (I actually preferred the robotic woman). RR6 features a thumping soundtrack of racing tunes which are very much dance inspired. There are some great tunes featured although this view is purely subjective as everyone has their own taste. Luckily there is not a single rock tune in the game, which made me a very happy gamer indeed. Players are able, as always to use their own music in the game; such is the functionality of the Xbox 360! Sadly there are more tunes available for download via the Xbox Live Marketplace but you have to pay for these which is a bit of a shame in my opinion.

Well I could simply write one word for this section of the review and that word would be “Long”. I have invested around 50 hours game time (although I’m sure a lot of hours have been spent with the game on but not being played) and I am down to the last few races before I have completed the entire World Xplorer mode. There are 235 races in total and whilst a number of them can be won on a first attempt; the latter races do become very challenging indeed and can take quite some time to beat. Unlocking all the cars will take a long time as well because there are some special vehicles that can only be unlocked online which is a shame for those not connected to Xbox Live. To get all of the online un-lockable cars players have to participate in 230 races which gains a new car every 10 races. So far I have raced 60 races online and obviously still have a way to go! The online races are very fun indeed and unlike PGR3 there are no spin outs caused when another player knocks into your car. In fact if another car bumps you from behind your car will get a small boost in speed which is rather handy. This element automatically makes the online portion of the game far more fun than PGR 3. For the offline player there is the World Xplorer, split screen, single races and time trail modes to mess around with, which as I said offers plenty of hours entertainment.

RR6 is a rather cool arcade racer that offers plenty of challenge throughout the learning process up to mastery of the game. There are times when things do get rather frustrating especially with some of the later races where your opponents can nitro boost from nowhere but its all part of the course and learning how to counter this is part of the game. I found RR6 to be an enjoyable experience and it’s great to have a contrast to the semi serious racing that is PGR3. If you were to rent RR6 then you would barely have enough time to scratch the surface of what the game has to offer so I would recommend a purchase if you are a racing fan looking for new horizons and new challenges.