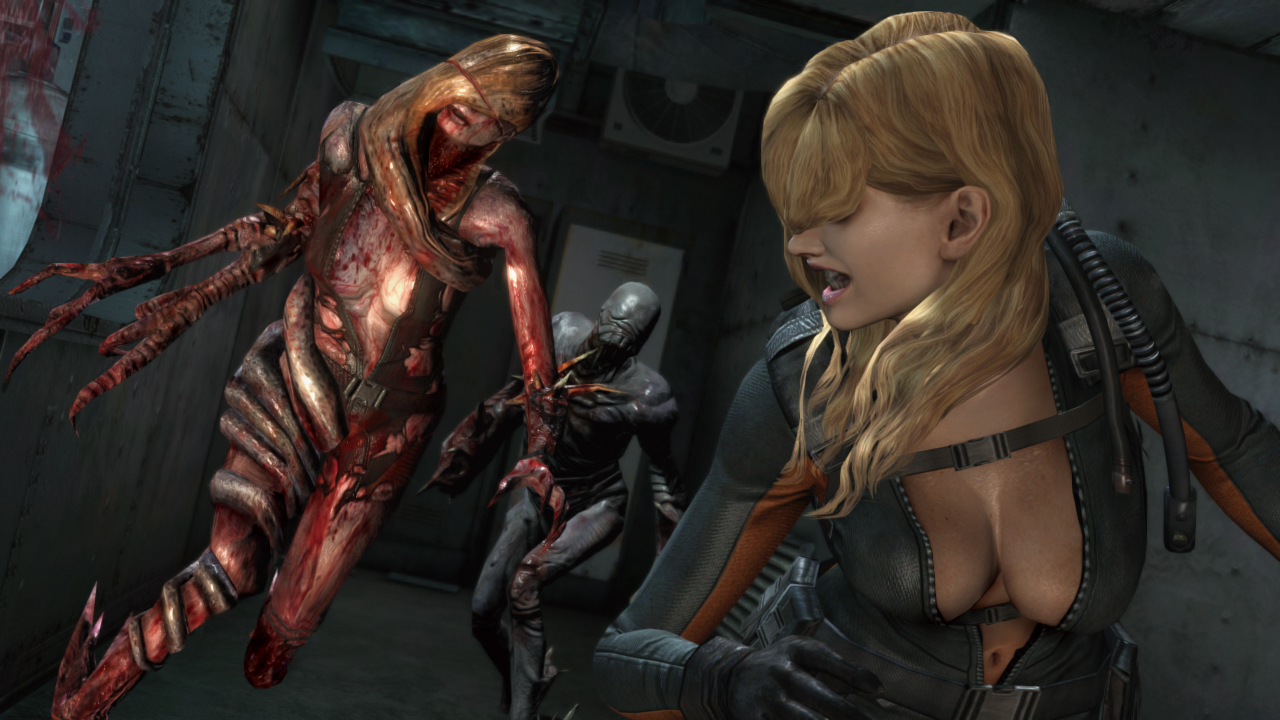 Today we’re taking a closer look at Capcom’s reiteration of the Nintendo 3DS classic in Resident Evil Revelations which has made the transition from small 3D screen to larger 2D versions. The game offers boobs, baddies, botox and B.O.Ws in spades, yet how does the game scale up in comparison, and is it better all round that more gamers get to experience this all at sea adventure.

To begin, Nintendo has enjoyed a very fine relationship with the Resident Evil series ever since bagging the remake of the original game for its Gamecube console – which to date still remains an exclusive. Then snagging the excellent Resident Evil Zero and four meant that Nintendo really had a grip on the franchise. When the 3DS version of Revelations was announced, once again it seemed Nintendo had snagged another exclusive title for its machines. Well, Revelations was in fact a timed exclusive as Capcom has brought the game to consoles and PC with a slight touch up and reworked game mechanics to suit the larger screen. In terms of the game, it plays identical minus the added depth of the 3D  and first person shooting which actually was pretty good.

So Revelations kind of returns to the series roots in that rather than head along a zombie filled route through the game and many locations as seen in the more recent offerings, this time the action is set on board of a ship which can largely be explored at will. This means lots of backtracking through the same areas and a general sense of being placed in confined and chilling quarters. This is actually a good thing and makes the game feel more tense and believable. Sadly, the survival horror element is somewhat absent as the game takes its action cues from Resident Evil 4 where ammo is plentiful and guns readily available. Whilst it’s certainly possible to run past some encounters, the onus seems to be on tackling enemies head on. There’s a nod here and there to the old school style where players can dodge incoming attacks by pressing a direction at the right moment, something introduced way back in Resident Evil Nemesis all those years ago. There’s an option to set the controls to the classic stop and shoot mode which purists might find more challenging compared to the strafing whilst aiming default. Also, the enemy types are more demonic as opposed to zombies, who offer a more precise challenge of melee versus player weapons in mostly tight quarters. There are no weapons based enemies here and what is perhaps the most interesting mechanic is the fact that the enemies make up for their lack of range by use of pure grit and being able to close in on the player at speed. It works, and makes a refreshing change from the more recent Resident Evil 6 – although some of the counter and diving moves are sorely missed here. To up the ante a little, players can also find items which can be used to modify weapons, making them more formidable as the enemies seem to get tougher. There’s a fair number of options available which adds a more personalized flavour to the game which is neat.

What’s perhaps very different about Revelations story is the fact that players don’t just stick with one , or even two lead characters. At several moments in the game, players switch to alternate heroes – some new to the series – along side series stalwarts Chris Redfield and Jill valentine. It’s a heady mixture of options and works very well in context of how the story is presented – often from different perspectives during past and present moments.

Revelations does look rather old school compared to Resident Evil 6 despite some wonderfully expansive and exuberant locations, as it’s obvious that it’s been ported from the 3DS although you have to imagine the very small screen and the levels of detail it produces versus a bigger screen. In this regard, the game is on par with some of the better digital download releases, and is in fact very playable where the looks shouldn’t come into the equation. Despite Jill having some trout pout botox lips, the character models are very good with some decent details throughout – especially as players spend most of their time looking at the characters from behind.

Audio is also handled well, with some good voice acting and tense and at pace music to emphasize the drama. There’s some fantastic moments of dialogue which fit in well with the series trademark cheesiness and if players really must, they can choose to go Japanese and set the voices to reflect the Biohazard offering.

Revelations campaign can no doubt be beating quite quickly on normal settings for those who skip cut scenes and know what they are doing if they played the 3DS version. Anyone else can expect some 8-10 hours of gameplay on a first playthrough which isn’t bad at all. There’s certainly some replay value with New Game Plus and an added difficulty, but the real meat lies in the awesome Raid Mode which offers countless more hours of fun and games using various sections of the single player and remixes of the enemies. This mode also highlights the customization options and how deep it goes where players can buy, sell weapons and use all the upgrades to find the best weapon combinations. There’s a bit of a random element here which keeps the exercise fresh. What’s also neat is being able to team up via online or system link to battle it out in tandem with a friend or strangers.

To conclude. Resident Evil Revelations might not be as polished as Resident Evil 6 in terms of looks, but there’s some really cool ideas here that put the latter to shame. Raid mode is a stroke of genius and the old school vibe of the campaign makes for a truly exciting and playable game that’s big on scares, has a perfect mix of exploration, puzzle solving and combat. It’s also not so drawn out to feel unnecessarily elongated for the sake of it. Whilst some of the boss battles feel like they could have offered an enemy health bar, the overall sense of accomplishment gleaned from completion makes the whole experience well worth it.  Fans of the series will love this game if they’ve not already played the 3DS version, and even if they have, the revisit still feels remarkably fresh.  Anyone else will have a whale of a time with the game as it suits the modern gamer and old school styles very well. There’s very little, if anything, to dislike about this game and therefore: