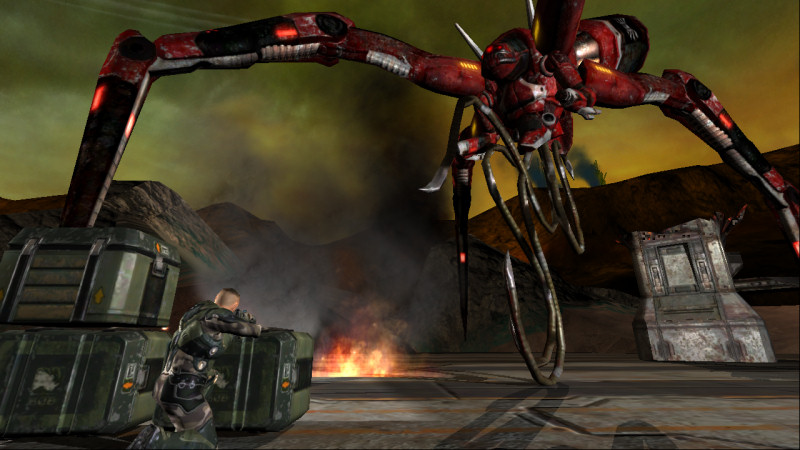 You are Matthew Kane a hardened soldier part of a future war against an alien race known as the Strogg. After surviving an incident aboard a space station Kane is thrust into the heat of combat as Earth’s forces launch an attack on the Strogg home world. There seems to have been a glimmer of hope as a lone marine was able to penetrate the depths of the Strogg command and kill their leader; however your fight, as Kane has only just begun as your craft is smashed to pieces upon entry into the Strogg planet’s atmosphere. The craft crash lands with Kane barely surviving, yet like a true hero Kane is on his feet in no time and thus his fight begins. This is death, this is Quake 4!

Quake 4 is a first person shooter that puts the player directly in control of Kane as he fights alongside other soldiers. The game play primarily revolves around Kane receiving orders from commanding officers and then carrying out these objectives, sometimes with assistance from fellow soldiers and sometimes without. To break down the type of mission objectives that Kane undertakes are things which can be as simple as escort person A to point A or even the old school reach point B and access a terminal. This simplified approach works rather well as it allows players the chance to focus on what the game does best and that is to simply survive by killing before being killed. There are plenty of health packs, armour and ammo to be found whilst navigating the levels and if you are lucky to have a Medic or Tech soldier with you then they can boost your armour or health at any time for you. The design of the game levels are fairly linear which means if you pay attention then you will find your way around quite easily without getting lost or backtracking (although the game does require backtracking at certain points). A lot of the game takes place in darkened areas or narrow corridors as well as outdoor areas which add a welcome contrast to the interiors.

The combat itself is pretty satisfying as you battle against simple AI routines that are there primarily to kill you at all costs. On your travels you will come across a variety of weapons throughout the story. Starting the game nets you a trusty blaster which to be fair will work quite well against the lower Strogg minions; however once tougher enemies rear their ugly faces (and yes there are some pretty mean Strogg out there) then something a little more meaty is required and luckily you find these weapons at the right times in the game. Shotguns, Machine guns, Railguns, Nailguns, Grenade Launchers, Rocket launchers to name but a few are all here for your playing pleasure and its good to know that with a little looking around or interaction with the right person will get you a free weapons upgrade. Talking of people, there are moments throughout the game’s story where you will encounter fellow soldiers and if you are not actually engaged in combat you can interact with them in a limited way. One such area is when you are in a base waiting to be briefed on your next mission objective. En route to the briefing room you are free to move around and talk at leisure with the other soldiers that are either working or relaxing. There are some interesting reactions and comments to be found here and makes the game feel more immersive.

Quake 4 features some excellent graphics at times which feature some truly spectacular lighting and shadow effects. There are moments in the game that really do open the eyes such as one moment deep into the game where your character Kane is accompanied by some soldiers. Kane and crew enter a darkened room which is illuminated only by the flashlights from the soldiers weapons. This looked amazing and oozed plenty of atmosphere. There are a number of occasions throughout the game that look fantastic and its clear to see that the developers Raven have used the Doom 3 engine very well in the respect of lighting and shadows. The character models look sharp and detailed as well and it’s awesome to see light reflecting off characters armour or when a shadow passes overhead.

Quake 4 isn’t without its problems though as there are times when the frame rate dips. What this translates to in real terms is things like when your character turns left or right and the transition isn’t as smooth as it should be. These moments do happen but do not hamper the game at all. I found that depending on how you play can also have an adverse effect on the game’s frame rate. One section I decided to make a run for it to a lift and avoid the enemies that were trying to gun me down, however once I reached the lift it wouldn’t operate until I had killed all the enemies in that area. What happened next was un-bearable; whilst I gritted my teeth ready to unleash my personal hell on the enemies that entered the room I was suddenly faced with loads of enemies that had all decided to chase me into the lift room. At this point the game became totally unplayable as the frame rate dropped significantly. This was probably a random scenario as I promptly died a few seconds later and figured being more thorough en route to the lift was a better approach. This did outline the fact that maybe the developers could have countered this issue by not making all the enemies chase you at once.

The sound featured is very atmospheric as there are all sorts of background noise effects used for things like machinery. The weapon sounds are meaty enough and fit nicely into a mix of real world and sci-fi type sound effects. The voice acting is of a high standard and as I said earlier it is worth talking to fellow soldiers when you get the opportunity. The music was a little underwhelming for me as it lacked any real tension and was just there in the background for the most part. But with the vast amounts of ambient sounds effects used I guess this is a good thing as the music drowning out important sounds would ruin the atmosphere. As with most Xbox 360 games you can opt to play your own music collection over the game if you so choose although I’m not sure that playing with Kylie Minogue blaring out would be suitable, but I guess that is entirely down to the player and whatever floats their boat!

Quake 4 isn’t the longest of games but for a first person shooter is probably about average. What is there to keep you coming back is playing on a harder difficulty or working towards gaining some of the achievements plus the game is fun enough to warrant a second or third play through anyways. If that is not enough then players can get involved with system link or Xbox Live games such as Death match and Capture the Flag modes. These are classic Quake multiplayer but un-fortunately does not allow for offline split-screen play or against bots. The multiplayer is a welcome addition to the game for those with Xbox Live and offers a faced paced “frag fest” that many gamers will enjoy. As a bonus to those without Live is the inclusion of the full game of Quake 2 which although doesn’t compare to Quake 4 is a welcome addition to the package.

Quake 4 is an enjoyable romp into a sci-fi war inspired nightmare which will have gamers in the thick of it from the moment the game begins. I enjoyed playing the game and will continue to do so as it offers a simplistic approach to gaming that has worked for years. The game might play like an old school shooter but it certainly looks very up to date and this alone makes the game stand out from it peers. There is lots of gore in the game which will no doubt please many gamers who aren’t squeamish and it’s all presented in a horrifying yet tasteful way. I think if you can ignore the very minor frame-rate issues which do appear sometimes and focus on the fact that Quake 4 is a highly immersive and entertaining roller coaster ride to hell and back then you will no doubt be pleased that you purchased or rented the game. Quake 4 is a very solid launch game marred only by some minor technical issues in the respect of the game feeling a little unpolished in places.