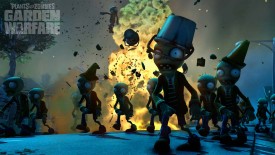 PopCap Games are not a studio you might associate with hardcore multiplayer shooters, though they are responsible for some of gaming’s more addictive pass times. When you need a break from getting gunned down by foul-mouthed teenagers in today’s online shooters, it’s the likes of Peggle or the old Plants vs. Zombies that you may turn to for reprieve.

It’s nearly 5 years since the tower-defensive Plants vs Zombies originally launched, the game has now been transformed into a multiplayer shooter of its own – in PVZ Garden Warfare.

There are four classes for each Plant and Zombie team, each has 3 unique abilities to be unlocked and they also have their own individual ranking system. Each is familiar to traditional classes such as a Medic, Rifleman, Assault etc. The Plant’s Sunflower for example has an ability to heal team-mates with a glowing beam and can focus a devastating beam on the zombies, whereas the Zombie’s Scientist can throw down a healing grenade to aid his undead companions, he can also teleport to flank unsuspecting plants and blast them in the face with a hoover-esque shotgun.

The Zombie’s Footsoldier is the equivalent to an infantryman wielding an assault rifle, but he also has a ZPG launcher strapped to his back where he can fire to obliterate Plants, or he can use it as a rocket-jump, enabling him to get up on top of rooftops, or perhaps more vitally escape from a burrowing Chomper.

Each side typically has a relevant class to the other where their abilities might differ slightly, and typically there’s always an ability that can be used as a counter measure. Such as the Plant’s Chomper can burrow and emerge instantly to gobble a Zombie, in such a situation either panic ensues and you turn and run to your inevitable doom, or you can take a moment and depending on Class, perform a counter attack of your own, such as an Engineer can lob a stun grenade to avoid being gobbled whole.

Also, there’s an ability to summon A.I. zombies or plants via. graves or plant-pots scattered throughout the maps, with such perks being acquired from sticker purchases. Buying stickers gains you special unlocks, from customisation items to alternate characters. Although purchasing stickers may not get you exactly what you want, it’s all rather random but thankfully doesn’t involve real-life coin.

The Plants and Zombies don’t just do battle on the ground, the fight also extends to the sky. Classes like the Cactus and Engineer can call in a drone to manually fly around and gun down enemies, although they take very little damage to be destroyed. Boss mode however is the true battle of the sky, giving players an entire birds-eye view of the map. In this mode a player from either team can become the evil Dr. Zomboss or Crazy Dave to aid their fellow undead or leafy friends. It’s a feature available in all modes and playable with either Kinect or on a Tablet via. Xbox One’s Smartglass app. It’s a simple enough interface, depending on team, you will either collect sun-drops or brains, which accumulates to currency to spend on abilities. These range from simple spotting of enemies, to more devastating air-strikes.

The game does feature very limited solo and split-screen support, though oddly this only applies to the Garden Ops mode. This split-screen option also does not allow other online players to join – there is no split-screen support for versus modes, which is disappointing, and ultimately it’s an odd inclusion without the full support across all modes.

Garden Ops is best played in co-op with a total of 4 players. It’s effectively Plants vs Zombies at its roots, just turned 3D, and is fairly similar to Gears of War 3’s Horde mode, with defences, bosses, and all. The Plants must protect their garden from an onslaught of varying zombies and random, yet iconic bosses, and must ultimately escape by defending a landing zone to be picked-up in Crazy Dave’s RV.

It’s relatively short-lived with just 10 waves on offer, but all the same it’s entertaining and perhaps the best way to familiarise yourself with the game.

Garden Warfare really comes into its own with the competitive 12 vs 12 multiplayer, with the Team Vanquish and Gardens & Graveyards modes. It’s here where you get to see all the varying classes and abilities in play, and it makes for deep and entertaining mayhem. Team Vanquish is basically deathmatch where the first team to rake-up 50 kills is the victor. However, it’s the Gardens & Graveyards mode that ultimately shines brightest. It’s objective based, attack and defend. The plants must protect a garden in a section; once the Zombies have overrun it another section of the map is unlocked with yet another garden, which must be protected and so on. If the zombies succeed they get a final objective to complete that’s unique to each map.

Rather surprisingly, the development task wasn’t given to another studio to undertake, it’s still very much a PopCap game, and for their first foray into shooters, they’ve crafted an incredibly quirky and deep class-based multiplayer shooter that stands out from the crowd with its vibrant colour palette and emphasis on humour. The characters and maps are incredibly detailed, and a great change of theme from the bleak war-torn shooters many of us are accustomed to. The audio in particular, whether music or character mumblings and grunts all further emphasise the humorous vibe throughout.

Who knew tower defence turn 3rd person shooter could work so well? The gameplay is simple to pick up and play, yet tactical to master with team-work being key to success. Given its price-tag there really should be more maps available, though the gameplay and bouncing of characters abilities off one another makes for an incredibly well-crafted shooter.

Garden Warfare plants the seed, it’s a game that should grow with the allure of free DLC already set in stone. The pricing may be too steep given a lack of maps – regardless Garden Warfare is an enjoyable, and more importantly, a refreshing game to play whilst still scratching that ‘multiplayer shooter’ itch. The perfect companion then – for say, another big, mechanical shooter that is standing by to fall onto Xbox One imminently.