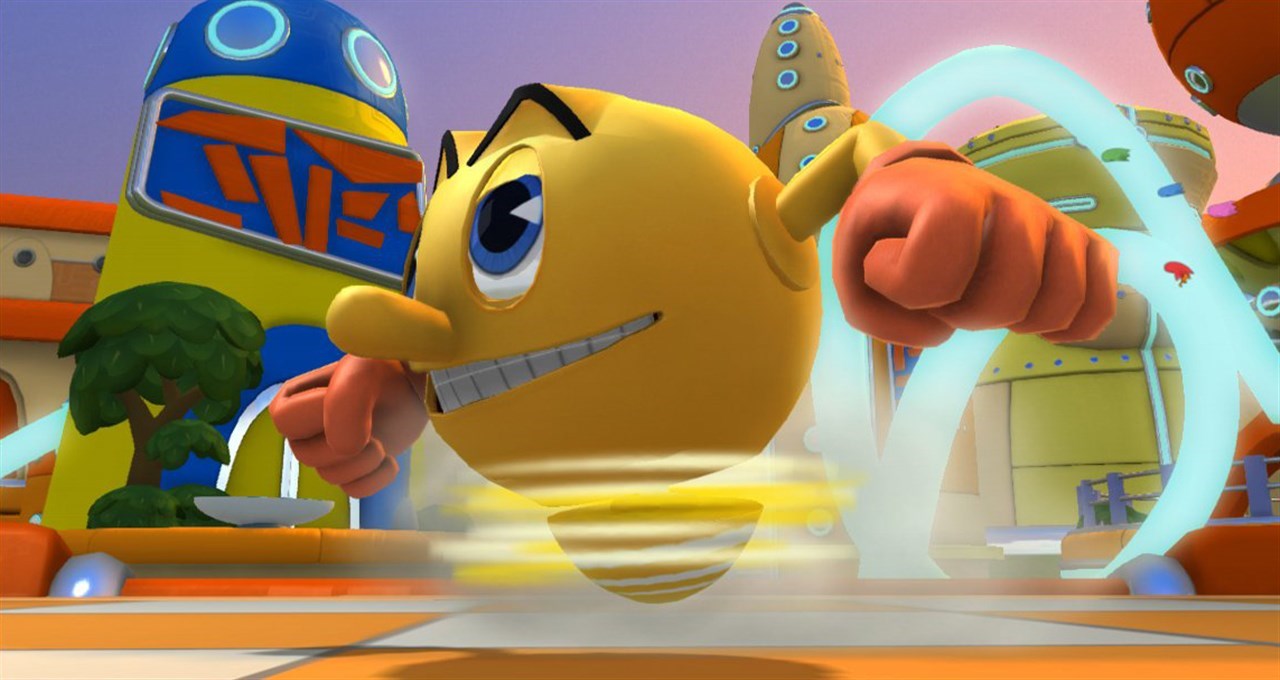 We take a look at Bandai Namco Games’ Pac-Man and the Ghostly Adventures which released on console and PC and features characters from the animated TV series and a whole lot of ghosts. With the game squarely aimed at the younger audience, how well does it fare? Take a look at our Pac-Man and the Ghostly Adventures video review for the full picture.

Pac-Man and the Ghostly Adventures:

Today we’re taking a look at the rather animated adventure platforming game, Pac-Man and the Ghostly Adventures from Bandai Namco Games which released on PC, Xbox 360 and PS3. The game pits our hero Pac-Man in a 3D adventure which is a far cry from his maze like roots and tells the story of an invasion of ghosts on the Pac home land.  In a nutshell it’s a perfect excuse to run, jump and morph into all manner of forms whilst chomping pills, eating fruit and munching on those pesky ghosts.

By design, the game is broken down into several themed areas, which are unlocked via the story and collecting pills. Each area has its own style which consists of ice, city, underworld and suchlike and allows players to take on various stages in each area. There’s a hub location to wander around outside of the main worlds, and it’s here where Pac-Man can interact with various characters players and fans should be familiar with, including the original Pinky and Clyde ghosts and an assortment of other Pac-Man characters.

Each stage can be completed rather quickly but more importantly allows players to chomp on special power up pills which change Pac-Man’s form. There’s a neat variety of forms which include being able to shoot fire, ice, become a walking magnet, a wrecking ball and even an inflatable to float up to lofty heights. The game design is tailored to suit these morphs and works well for the most part, although there are some issues with the game camera being a bit fiddly which results in an unfair death or two. In this regard, some of the checkpoints are a bit unforgiving and becomes a pain having to start over from a death that wasn’t entirely the player’s fault. The game’s combat versus a wide variety of aggressive ghosts is quite cool and reminiscent of Pac-Man’s roots where he can dash to each ghost and chomp them at will. However, some ghosts require slightly different strategies and use of the said morphing skills to take down. It’s quite satisfying jumping into an area and being able to chomp all the ghosts in one fell swoop, although does feel quite easy to pull off.

For the most part, the game plays smoothly with  easy navigation despite the levels looking quite full of activity and many inanimate objects to smash or walk through to collect pills and such like. There are areas to jump over to off the beaten track so to speak to grab extra lives and health, but these can largely be ignored. What’s interesting are various boss characters which have to be taken down to progress. Whilst fairly imaginative, these are pretty easy to beat and perhaps somewhat lacking in challenge, even for younger gamers.  In fact, these are probably some of the shortest boss battles known to man!

In terms of looks, the game sports some clean fresh visuals that work well with the animated framework of the TV show. There’s little to fault here as adventure games go, although there could have been a little more variety in terms of the worlds players explore.

The audio is also pretty good with an abundance of familiar sound effects from past Pac-Man games and voice performances that are typical for the type of characters presented. There’s a fast paced electronic musical score which seems lifted from the more recent Pac-Man DX games which suits the mood perfectly.

For younger players there’s a fair number of hours worth of play on offer here, although older gamers will breeze through the game pretty fast coming up against  little challenge.  Players can jump into to four player splitscreen multiplayer across several maps should they wander outside of the story adventure, it’s here where players become the ghosts and go head to head to hunt down Pac-Man for points. It’s a neat distraction, but not something the beckons to be played over a longer period.  During the adventure, there are several old school themed mini games to unlock which add a bit more meat to the package and are based on classics such as Defender which is pretty neat.

To conclude,  Pac-Man and the Ghostly Adventures is a cool, game for Pac-Man fans, especially youngsters who are fans of the animated version rather than the old school games. There’s a distinct lack of challenge here for anyone over the age of 10 but given the target audience, sits about right without being too frustrating. In a nutshell, Pac-Man and the Ghostly Adventures is a competent game that does what it sets out to do without deviating too much from the source material. It’s inoffensive and perfectly suited for the younger gamer, although compared to some other games aimed at this age group perhaps lacking in overall content. If you’ve got youngsters then this is worth checking out, although be warned, the lack of local co-op for the story means it’s a one player at a time deal which might not sit so well with multiple kids wanting to play at once.